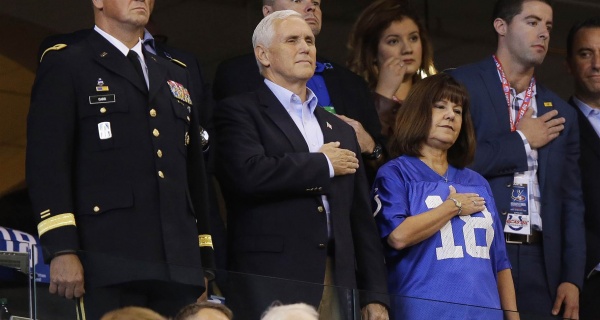 In recent weeks, between provoking North Korea and congratulating himself for a job well done in Puerto Rico, Donald Trump has used his Twitter account to focus on another issue of grave national importance: feuding with the N.F.L. In all, the president has tweeted no less than 27 times about football players protesting racial inequality by kneeling during the national anthem (with some of those tweets calling for them to be fired and all of them expressing outrage typically reserved for Nazis). And, because he indisputably stands behind the president, no matter what rumors may suggest, V.P. Mike Pence got in on the action Sunday, executing one of the most transparently obvious political stunts in recent memory.

On Trump’s orders, Pence walked out of an Indianapolis Colts game against the San Fransisco 49ers—the former team of blacklisted quarterback Colin Kaepernick, whose members have been taking the knee for more than a year now—when several players knelt during the anthem. In case you didn’t see this coming from several miles away, The New York Times notes that a member of Pence’s staff told the pool reporter traveling with him not to enter the stadium because there was a chance the V.P. would make an early departure. And of course, no stunt would be complete without a breathless (and definitely not pre-meditated) Twitter statement.

One thing Pence failed to mention was the cost of flying from Las Vegas to Indianapolis and then back west to Los Angeles, a tab CNN puts at $242,500—roughly $200k more than if he’d simply flown from Vegas to L.A. In a statement, a Pence aide defended the side trip: “If the Vice President did not go to Indiana for the Colts game, he would have flown back to D.C. for the evening—which means flying directly over Indiana. Instead, he made a shorter trip to Indiana for a game that was on his schedule for several weeks.”

Pence also hasn’t responded to critics who’ve noted that, in the run-up to the anthem, the photo he posted of himself and mother really looking super excited about the game and not at all planning to leave early was actually from a Colts game in 2014. Nor has he explained the immediate and simultaneous rollout of a photo of him with his hand over his heart on his Instagram, Facebook, and Twitter pages.

Naturally, the president lost no time in broadcasting his support, claiming this morning that his No. 2 is receiving “great praise” for the stunt.

Shockingly, he seemed to have no qualms about the vice president using the U.S. flag and anthem as props in a premeditated (and taxpayer-funded) political protest against a...political protest.