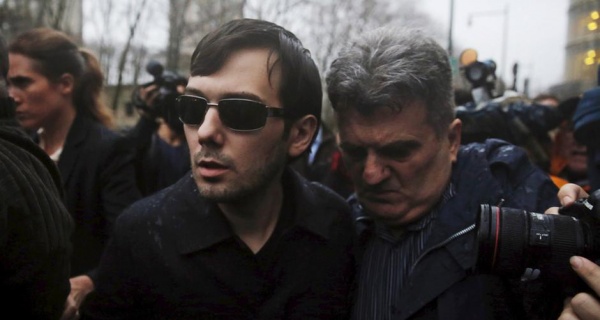 The reviled “Pharma Bro” says he’s holding up just fine inside a Brooklyn prison cell – despite his snoring cellmate.

“Things are not THAT awful here,” inmate Martin Shkreli recently wrote to a friend, underlining “THAT” three times. “There are some bright sides. I am teaching these prisoners some new things and hopefully some ways to change their lives.”

When Shkreli arrived in the Brooklyn federal lockup last month, there were questions about how the slender securities fraud convict might fare amid the murderers, wiseguys and other accused criminals.

Turns out that jail time proved the right medicine for Shkreli as he awaits sentencing.

He’s reading, playing chess and shooting hoops. He’s building up his chops as a life coach for fellow inmates – and even giving a gangster a shoulder to cry on.

“I’ve heard a lot of sorrowful, plaintive stories here,” he wrote in the letter. “One guy was just in my room, crying. Supposed mobster.”

It’s not all fun and games in lock up: Inmate 87850-053 says in addition to his roomie’s nocturnal noisemaking, his cramped and uncomfortable bed makes it tough to get a good night’s rest.

After Brooklyn Federal Court jurors convicted Shkreli in August of three counts in a securities fraud trial, he was sprung on $5 million bond pending a Jan. 16 sentencing. He faces up to 20 years in prison.

The day of the split verdict, he boasted online he might chill at “Club Fed” and be out in months.

But Shkreli suddenly found himself locked up inside the Metropolitan Detention Center after Judge Kiyo Matsumoto revoked his bond.

The judge was not amused by Shkreli’s Facebook post offering $5,000 for a strand of Hillary Clinton’s hair.

Shkreli looked sullen as two deputy marshals ushered him from the courtroom into a holding pen.

But it sounds like Shkreli has rebounded – or at least put on a brave face – in a letter he wrote to Lisa Whisnant of North Carolina.

Shkreli’s prison pen pal, after receiving the missive earlier this week, shared its contents with the Daily News.

He thanked her for sending books on his wish list: A smattering of literature, ancient Roman philosophy and tomes on coding. “They are useful for me but also my fellow inmates,” wrote Shkreli.

He asked for extra copies of “48 Laws of Power” and “Who Moved My Cheese?” Both self-help books are “big here,” he wrote.

Shkreli wrote his friend he was “mentoring as much as I can and books are a part of that.”

The Sunset Park jail is just 10 miles from Shkreli’s Murray Hill apartment and even closer to where he grew up in Sheepshead Bay.

But it’s a world away from his old life managing hedge funds and pharmaceutical companies.

Whisnant first heard of Shkreli when he became the subject of worldwide scorn and outrage for jacking the price of the life-saving anti-infection drug Daraprim 5,000% overnight in 2015

“I thought there must be more than this,” she explained to the Daily News. She wrote him to get his side of the story, expecting no answer.

He instead replied to her that insurance companies would shoulder the extra cost, with the money going to research – and said he offered the drug dirt cheap to Medicaid recipients.

The two have been in touch ever since.

Whisnant said she wasn’t looking for attention by turning over the letter – she just wanted the world to know Shkreli was OK. And she wanted to relay his call to get more self-help books to fellow incarcerated bookworms.

Martin Shkreli's $2 Million Wu-Tang album may not be legit
Shkreli’s lawyer, Ben Brafman, told The News he was very proud of his client’s behavior behind bars.

“He is doing as well as can be expected under the circumstances,” Brafman said. “He is even helping other inmates, teaching math and other remedial subjects.”