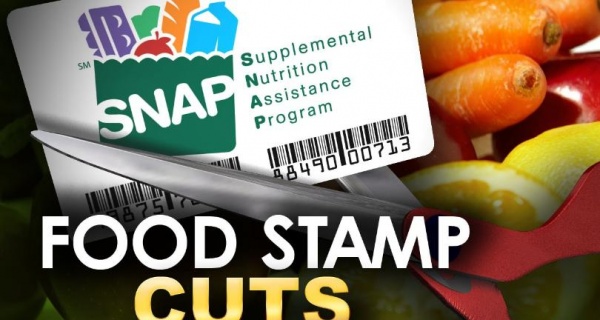 UPDATE: The budget resolution passed by the House on Thursday will push millions of already struggling people off food stamps, leaving the neediest Americans—children and the elderly among them—without food.

The $4.1-trillion budget will take over $150 billion away from several poverty programs, including the Supplemental Nutrition Assistance Program (SNAP), which helps low-income people keep food on the table, by giving them small amounts of supplemental money to spend on groceries—anywhere from $100 a month to $700 a month for a family of five, according to the Center on Budget and Policy Priorities.

This budget isn't the newest problem SNAP has had to face. The number of people on SNAP ebbs and flows with the economy, but only 75 percent of people who are eligible for SNAP actually participate in the program, the website Snap to Health says. And it's because applying can get really complicated.

Evan Teske, a 26-year-old medical student, needed assistance while he was working for Americorps. After graduating from college in 2014, Americorps assigned him to Focuspoint Family Research Center, which focuses on education from childhood to adulthood. His stipend just wasn’t enough.

“So I had to apply for food stamps,” Teske told Newsweek.

The application process was pretty confusing, he said, but Americorps helped him apply. Then, after about a year and a half, he was taken off.

“I got taken off by the government against my will because every six months I had to update my paperwork so they could see how much they were giving me,” Teske said. “And at one point, when food stamps and a stipend still wasn’t quite enough, I had help from my parents and family members to help me out in a pinch. When I put that down in the updated documents, they didn’t call it an income, but they said it was extra. So they cut me off.”

Teske worked for Americorps for the next six months and then moved to New Mexico for medical school. He said SNAP and food stamps made his life more livable.

Teske was taken off food stamps because his family helped him when he was needing a bit more. If Trump's budget proposal passes the Senate, as it has already passed the House, many more people will be bumped off SNAP—and a lot of them won't have the familial safety net that Teske did.

“SNAP is the first line of defense against hunger in the U.S.,” Ellen Vollinger, the legal director who directs SNAP work at the Food Research and Action Center, told Newsweek. “It’s the one program that’s available all over the country to serve people who need food. It’s the most accessible and available to people.”

But lately, for two big reasons, fewer people have been taking advantage of SNAP. First of all, the economy is doing better, which means fewer people are struggling with poverty and fewer people need the program.

“The unemployment rate has often been a pretty good indicator for the need for SNAP. As it comes down, there might be a bit of a lag, but we see SNAP come down,” Vollinger said.

The second reason, however, is that some states are cutting corners by making it more difficult to apply for SNAP so they make more room in their budget.

“A lot of people don’t know that they’re eligible,” Ginger Zielinskie, president and CEO of Benefits Data Trust, a company that connects people with the services they need, told Newsweek. “The first barrier is awareness. ... It can be a really complicated application process.”

Moreover, some state laws don’t allow people to stay on SNAP for longer than a few months unless they have jobs, are training for jobs or are doing community service. But in times of economic stress, there aren’t always jobs available for them.

Take, for example, Devon Bracher, who graduated from Vanderbilt with an engineering degree and was living with her two sisters in Portland, Oregon, when she applied to get on SNAP after not being able to find a job.

“Technically, my residency was in Virginia, but all my work experience was in Tennessee,” Bracher told Newsweek. “I didn’t have a job, I was looking for jobs. This was my first year after graduating. That was part of what's complicated. I wasn’t an Oregon resident, but I didn’t have an official job in Virginia. Virginia told me to apply to Tennessee.”

So Bracher went through the online application for SNAP. But the system had her call a SNAP representative because she wasn’t a Tennessee resident.

“I probably called maybe like five different times and the line was always busy,” Bracher said. Eventually, she just gave up.

“I benefitted a lot from being able to live with family,” Bracher said. “My sisters helped a lot.”

Not everyone has a family like Bracher’s, and if the proposed cuts to SNAP make its way through, the states will be responsible to keep families from starving.

In Alabama, for instance, the number of able-bodied people on SNAP has dropped from around 5,000 to 800. Most of it is because of the regulations states are forced to place on the benefits so that they can make their budget, a trend that's seen all over the U.S.

Californians have concerns people who need programs like SNAP won't be able to access them under Trump's new budget, according to Jared Call from California Food Policy Advocates.

“We try to think of people first, but this particular [budget proposal] … would really seek to shift a substantial share to the states or propose penalties to put states on the hook and that’s just not something that state budgets are prepared to absorb,” he told Newsweek.

“California would go down $1.8 billion to just keep even. So you’re faced with cutting other important services or education or other programs or cutting benefit amounts or cutting eligibility," Call said. "We want SNAP to go to the people who need it, but this proposal does not work that way. There is no way to cut SNAP without impacting benefit levels or eligibility. Ninety-four percent of these funds go directly to benefits, there’s no fat to cut.”

One in six people in America faces hunger, more than almost any other country in the developed world. If this budget goes through, and important programs like SNAP are axed, that number will be on the rise.