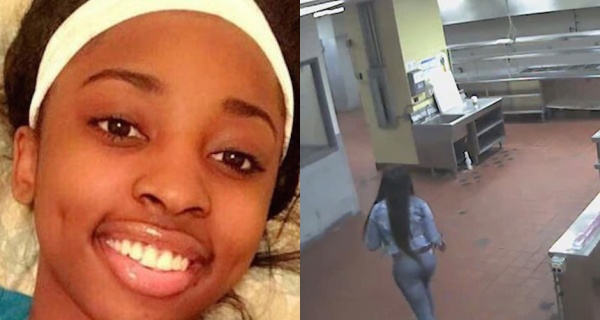 The Cook County medical examiner's office has determined that Kenneka Jenkins' death at a Rosemont hotel was an accident. She died of hypothermia from exposure to cold in a walk-in freezer, it said.

Alcohol intoxication and the use of a drug for treating epilepsy and migraines were "significant contributing factors," the office said.

The 19-year old was found inside the freezer on Sept. 10 after she disappeared from a room at the Crowne Plaza in suburban Rosemont. She had attended a party with as many as 30 other people on the ninth floor and wasn't found until nearly 24 hours after her disappearance, after repeated pleas to the hotel and police by the family.

Surveillance videos released by police days later show Jenkins, alone, wandering through a kitchen area near the freezer not long after she disappeared.

The initial lack of information released by authorities drew activists and sparked online conspiracy theories that she was attacked and killed. The speculation was fueled by a number of videos on social media appearing to show the party and some of Jenkins' friends.

The autopsy found mucosal erosions, a type of lesion, that indicated Jenkins had suffered from hypothermia, the medical examiner's office said in a statement.

There was an abrasion to her right ankle and a purple contusion on her right leg, but no other sign of external or internal trauma, the office said. Her brain was swollen, but that is not indicative of a specific cause of death, it said.

Comprehensive toxicology tests were conducted for hundreds of drugs of abuse, medications and other chemical compounds, and the office said it sought to see if "date rape drugs" were in her system. None were found, the office said.

The testing found alcohol, caffeine and the epilepsy/migraine medication topiramate in Jenkins' system, the office said. Her family said she had not been prescribed the drug, but the level was within the therapeutic range, the office said.

Her blood alcohol level was 0.112, higher than the legal limit of 0.08 for legally driving. The alcohol and the drug can enhance each other, the office said.

The office said it's not known when she died or how much alcohol she consumed.

The combination of alcohol and topiramate found in Jenkins's blood can cause "impaired memory and concentration, poor coordination, confusion and impaired judgement," among other adverse effects, the office said. This, plus cold exposure, could speed the onset of hypothermia and death, the medical examiner's office said.

On Sept. 27, the medical examiner's office went back for a follow-up investigation. A forensic pathologist assigned to Jenkins' case and the office's chief of investigations, a former New Orleans Police Department homicide detective lieutenant, went to the hotel and followed the path Jenkins took to a kitchen on the lower level of the hotel, the office said.

Rosemont police led the staff through the main kitchen area, up a set of stairs into a second kitchen area that was said to be unused at the time of Jenkins' death, the office said.

The freezer Jenkins was found in was capable of getting to a temperature of 8 degrees, the medical examiner's office noted.

The cooler and freezer were both outfitted with external handles that must be pulled to open, the office said. The inside of the freezer door was equipped with a circular release mechanism, the office said.

Rosemont police told the medical examiner's staff that the light inside the freezer was not on when Jenkins was found. There is a light switch outside the cooler door, the office said.

Video surveillance showed Jenkins entering the kitchen at approximately 3:32 a.m. on Sept. 9, but the recordings do not clearly show her entering the cooler and freezer because there are no cameras that directly show those doors, the office said.

Jenkins was discovered in the freezer approximately 21 hours after the video documented her entering the kitchen, the office said.

Citing the police investigation, the medical examiner said there's no evidence Jenkins was forced to consume the alcohol or the drug. There also was no evidence of another person near the kitchen with Jenkins, and there was no evidence of an altercation or interaction with another individual immediately prior to her death, the office said.

The autopsy results were released the same day that the family filed a legal document in Cook County Circuit Court, claiming several padlocks that could have prevented entry to the unused freezer were available nearby but not used.

The abandoned and unused upstairs kitchen had its cooking stoves and ovens removed, but for "an unknown reason" the empty walk-in freezer was still operating, according the filing by attorneys for Tereasa Martin, Kenneka's mother.

The points were made in a filing in which attorneys asked for evidence to be secured and not destroyed in anticipation of a lawsuit against CPO Hospitality LLC, Crowne Plaza Chicago O'Hare Hotel and F & F Realty Ltd.

The court filings also revealed that attorneys for Jenkins' family conducted a private investigation of the 19-year-old's death and found no evidence of injury from a physical attack or sexual assault.

Kenneka's mother had sought police assistance a few hours after her daughter disappeared, but a dispatcher told her Jenkins might have gone to a friend's place or passed out after drinking too much.

Crowne Plaza staff eventually searched public areas of the hotel, and were later joined by Rosemont police. At 12:24 a.m. Sept. 10, according to video released by the village, a hotel worker went around the corner in the kitchen and summoned police that Jenkins' body had been located.

The case prompted protests from demonstrators who converged on the hotel, stirred by the strange circumstances of the death and Martin's complaints about the initial response from hotel staff and police.

In Friday's filing, attorneys noted hotel staff was aware that a hotel party was taking place and "should have known that the 20 plus people that occupied the room exceeded the number of persons that could safely occupy the room at any given time."

In a statement released Friday night, Rosemont police said though “no sign of foul play appears to exist at this time,’’ they are continuing to investigate Jenkins’ death and are still looking for two people who originally checked into the hotel for the party.

One of the two is Shaniqua Watkins, who is wanted by police for theft or unauthorized use of a credit card and is being sought on four “active’’ arrest warrants, police said.

Four cellphones have been recovered from people at the party, including one that belonged to Jenkins and was obtained through a search warrant, police said. A forensic examination of the cellphones was conducted and they are being analyzed by detectives. Video surveillance from the hotel was sent out to be “enhanced for further examination,’’ and police are waiting for access to a Facebook account, to examine a video ''in its native format,’’ police said.

Police said they are working with the Cook County fugitive task force to locate Watkins but if anyone knows where she is, they are urged to call police, 847-823-1134, ext. 373.