A Look Inside The Downside Of For-Profit Schools 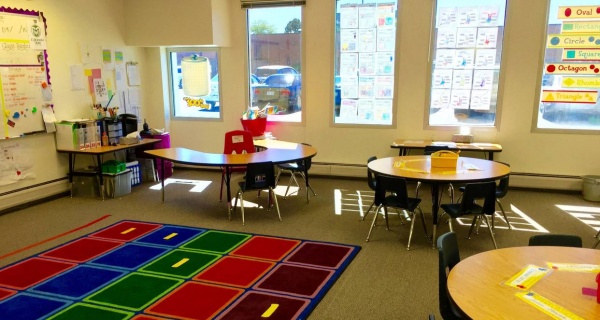 Last school year, Ohio’s cash-strapped education department paid Capital High $1.4 million in taxpayer dollars to teach students on the verge of dropping out. But on a Thursday in May, the storefront charter school run by for-profit EdisonLearning was mostly empty.

In one room, vacant chairs faced 25 blank computer monitors. Three students sat in a science lab down the hall, and another nine in an unlit classroom, including one youth who sprawled out, head down, sleeping.

Only three of the more than 170 students on Capital’s rolls attended class the required five hours that day, records obtained by ProPublica show. Almost two-thirds of the school’s students never showed up; others left early. Nearly a third of the roster failed to attend class all week.

U.S. Secretary of Education Betsy DeVos has championed charters and for-profit education, contending in Congressional testimony that school choice can lower absenteeism and dropout rates. But at schools like Capital, a ProPublica-USA Today investigation found, the drop-outs rarely drop in—and if they do, they don’t stay long. Such schools aggressively recruit as many students as possible, and sometimes count them even after they stop showing up, a practice that can generate hundreds of thousands of dollars in revenue for empty desks.

ProPublica reviewed 38 days of Capital High’s records from late March to late May and found six students skipped 22 or more days straight with no excused absences. Two were gone the entire 38-day period. Under state rules, Capital should have unenrolled them after 21 consecutive unexcused absences.

Though the school is largely funded on a per-student basis, the no-shows didn’t hurt its revenue stream. Capital billed and received payment from the state for teaching the equivalent of 171 students full-time in May.

In 2012, Ohio auditors examined a sample of former students and found Capital High had failed to withdraw 90 percent of them in “a timely manner.” Three years later, a state report placed Capital among seven schools with the largest variances between reported enrollment and actual attendance.

An EdisonLearning spreadsheet charting withdrawals and enrollments in 2015-2016 shows that, on average, the student totals Capital submitted monthly for funding exceeded its internal tally by at least 24 percent.

Told of ProPublica-USA Today’s findings, both Ohio’s state auditor and its Department of Education said they would investigate Capital.

Because enrollment is constantly changing, “a single snapshot of enrollment and withdrawals will more than likely not match” state totals, EdisonLearning said. The company conceded extended absences are a “persistent challenge,” but said it shares all student attendance records in “real time” with state education officials. If issues arise, the company said, it addresses and corrects them.

The school’s program director, Monica Scott, said she urges students, who often have difficult home lives, to come to class. “I’m telling them you have to get your instructional hours,” she said.

Corey Timmons, 19, who graduated from Capital this spring, said he had complained to Scott about students coming and going as they pleased. “It’s not really a school environment,” he said.

Across the nation, roughly six percent of young people ages 16 to 24 are considered dropouts. Many more teeter on the brink of leaving. Their challenges include homelessness, domestic violence, bullying, and learning disorders.

So-called “dropout recovery” schools are increasingly popular, with many setting up shop in poverty-stricken city neighborhoods. In Chicago this past year, about 8,000 students attended such schools. In Ohio in the 2014-2015 school year, more than 16,000 students did, including some who attended online-only programs.

For-profit school management companies like Capital’s parent, EdisonLearning, have rushed into this niche, taking advantage of the combination of public funding, an available population of students and lax oversight.

EdisonLearning and other for-profits sometimes sign contracts with local school districts to manage these dropout recovery schools. In Ohio and a few other states, though, companies have often operated them as charter schools, which are publicly funded but independently run.

After pulling in students long enough to tap public money, many of the schools fail to keep them in class. In Ohio in 2016, for-profit companies ran nearly a third of the state’s 94 charter schools for dropouts – but three-fourths of the 20 with the highest absenteeism rates.

“They were trying to get the children in, but didn’t know what the needs were,” said Monique Newburn, a former EdisonLearning teacher who worked at one of its dropout recovery schools in Chicago.

EdisonLearning and its competitors say their curriculum and instruction are well-designed to help borderline students earn diplomas and avoid the devastating consequences associated with quitting high school, such as lifelong unemployment and underemployment. Even detractors acknowledge that rescuing dropouts is difficult work, and a high rate of failure is likely.

Yet dropout recovery schools like EdisonLearning’s have incentives to inflate enrollment counts. Unlike traditional schools, they serve the most unreliable students. They must hustle to attract enough enrollees, while traditional schools get a steady stream of kids from their residential zone. In 2015, Ohio auditors found, for-profits ran five of the seven dropout recovery schools with the biggest gaps between reported and observed enrollment.

Ohio doesn’t have education money to spare for ghost students: This year’s state budget froze or cut funding for most school districts.

In 2011, NBA Hall of Famer Earvin “Magic” Johnson signed on to spread word of EdisonLearning’s newest enterprise: A chain of eight dropout recovery schools it had opened in Ohio the year before, calling them “Bridgescape” academies. Advertising urged students to “Join Magic’s Team” and included local events, ads on bus benches and direct mail – along with local radio, television and print spots.

“Let me help you achieve your dreams,” Johnson told radio listeners in Cleveland.

By 2013, the Bridgescape program had expanded to 17 schools in six states and secured a plum contract in Chicago.

Such strategies came up in a 2016 conference call on enrollment, according to an internal PowerPoint obtained by ProPublica. It recommended weekly “outreach to former schools of enrolled students (referrals).”

Hoffman said the efforts had mixed results. They succeeded more often in Ohio, which allowed traditional high schools to remove from their ledgers the test scores of students who transfer to charter schools. The pitches were less effective in Illinois, which held traditional schools accountable for students’ performance even after they switched to Bridgescape. With no benefit from letting students go, Chicago schools fought to retain students and the per-pupil funding they brought.

In a statement, EdisonLearning said “there has been no outreach to traditional schools” to boost enrollment. Contacts that Bridgescape initiated with former students’ schools consisted mainly of requests for documents and transcripts, it said.

In Chicago, like other dropout school managers in major cities, EdisonLearning made connections with politically powerful African-American pastors who helped with recruitment – including, Hoffman said, organizing door-to-door campaigns.

EdisonLearning turned students into marketers, too, with Ohio Bridgescapes rewarding them with gift cards for referring new enrollees while maintaining high attendance. And the company hired a call center. At one point, Hoffman said, its employees were calling potential leads three times a day for 45 days before marking the lead cold.

John Kuhn, a former Chicago Bridgescape teacher, said the recruiting tactics by some for-profit dropout recovery schools made him queasy. “It shouldn’t be a thing where we have to aggressively market them,” he said.

In 2014 and 2015, state auditors making unannounced visits to charter schools across Ohio discovered alarming differences between the number of students actually sitting in seats and the claimed enrollment levels. Dropout recovery schools like Capital fared the worst, leading State Auditor Dave Yost to warn they were at an “increased risk” of inflating student counts.

EdisonLearning said auditors in Ohio and Chicago – who also challenged Bridgescape’s numbers – at times have not grasped its schools’ unique challenges and non-traditional schedules.

Yost said recently that Ohio needs better security measures to prevent dropout recovery schools from manipulating enrollment data. “It’s just clear that the honor system of ‘trust us’ is not really working all that well,” he said.

In the summer of 2016, EdisonLearning ended its partnership with Magic Johnson and removed his name from schools’ signs. Officials with the company and Magic Johnson Enterprises said the five-year agreement “mutually concluded.”

“Mr. Johnson was personally committed to the Bridgescape program,” Magic Johnson Enterprises said in a statement, “and proud of the success the vast majority of students showed in their educational growth.”

In January, EdisonLearning bought a chain of six for-profit charters in Florida called Mavericks in Education.

Located in a weathered strip mall on Columbus’ high-poverty West Side, Capital High occupies a one-story storefront with mirrored plate-glass windows. Students sign in at a counter, on a sheet preprinted with their names, before walking through a metal detector. The first shift begins at 7:30 a.m., the second at 11. While the school employs seven teachers and offers some small classes, most students are supposed to work for the full shift on computers.

Scott, the program director, said her desire to make school accessible to students with commitments at work and home has led her to “allow them to flex a little bit more.”

On that unseasonably hot Thursday, students drifted out early in the afternoon. One was Sabrina Blevins, 18, who came to Capital as a sophomore when she had a hard time keeping her grades up at her previous high school.

Blevins has missed school for weeks at a time: “I’ve hit the limit a couple of times.” But she always came back without having to re-enroll, and hopes to graduate in December, she said, adding, “There’s a lot of kids, they just disappear.”