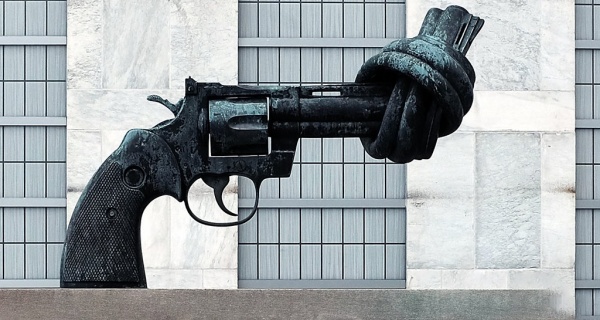 It's easy to call acts of horror "evil." It's comforting to ascribe an external, unknowable motive to events so terrible we can't imagine a motivation.

The human mind is incapable of imagining what would drive a man to haul an arsenal of high-powered weapons into a hotel room, knock out a couple windows, murder dozens of people and injure hundreds more by spraying them with gunfire. So we call it evil. That settles that.

President Trump called the shooting in Las Vegas that left at least 59 dead and more than 500 injured "an act of pure evil," and who's to argue with him? If evil exists in this world, surely indiscriminately murdering faceless strangers from 300 yards away qualifies. Whatever drove Stephen Paddock to that hotel room that night would fall under any reasonable definition of evil.

But what if evil doesn't exist in this world?

Of course people do terrible things. Examples are easy to find, from our own regrets to the most unimaginable cruelties. Paddock murdered dozens of people. The government of Myanmar, led by a Nobel Peace Prize winner, is engaged in a brutal genocide against an ethnic minority. Every day children are exploited and abused. The world is an abattoir of violence and cruelty if you choose to do nothing but focus on the terror we visit on each other.

But evil? Evil as an independent reality, a thing-in-itself that urges people to action? "Evil" not as judgment of Paddock's actions but as an explanation of them? That's a fantasy, and it absolutely will lead to more shootings like these, more deaths.

When elected officials like Trump rely on "evil" to explain away mass shootings, they are following a deliberate strategy. Republicans know wall-to-wall coverage of these events are the best opportunity gun control advocates have to draw attention to the issue and save lives. But the GOP – beholden to the overhyped power of the National Rifle Association – have just one goal: pass zero bills restricting gun sales in any way. (In fact, the Republican leadership in the House is currently considering a bill that would make it easier to purchase both silencers and armor-piercing bullets.) They follow a few strategies like clockwork.

There are calls not to "politicize" these tragedies. They say it's too soon, that it dishonors the victims and their families to bring politics into the discussion.

They claim specific gun laws wouldn't have stopped this individual tragedy, because it's not the right gun, or the perpetrator would have passed a background check – as though stopping some future mass shootings isn't worthwhile if we can't stop them all.

They claim criminals intent on breaking the law will just ignore gun laws anyway, as though that doesn't apply to every law ever passed.

And they call these events "evil" to make them seem random and unpreventable. You can't fight evil, after all. It's invisible, incorporate. It's the perfect foil for politicians who don't want to do anything. What are we going to do, pass a law to make evil illegal?

Trump isn't going to propose or support gun control legislation in the wake of the worst mass shooting in the nation's history. Calling what happened an act of evil is just one way to point the blame in another direction than the gun culture and lax laws that enable it. If Trump was too subtle about it, Kentucky Gov. Matt Bevins made it explicit:

Bevins believes in regulating the "evils" of abortion and marijuana, but when it comes to guns, well, you just can't regulate evil. And he's right – you can't.

But the problem here isn't evil. It's not the devil. It's us: human beings. We have motivations and justifications and rationalizations and reasons for everything we do. We don't know why Stephen Paddock murdered those people. Maybe we never will. And maybe the sensible laws we could pass, like universal background checks and a ban on all assault weapons, wouldn't have stopped someone so wealthy and motivated to commit horror. But it could stop someone else. It would save lives.

Blaming evil is an excuse to do nothing in the face of tens of thousands of gun deaths a year. Only a fraction of those deaths are the result of mass shootings like in Las Vegas. We can and should work to reduce all gun deaths, from suicides to accidents to crime-related deaths to massacres like Sunday's. That means passing laws that keeps guns out of the hands of people who shouldn't have them. The only other option is to do nothing.

And that would be evil.