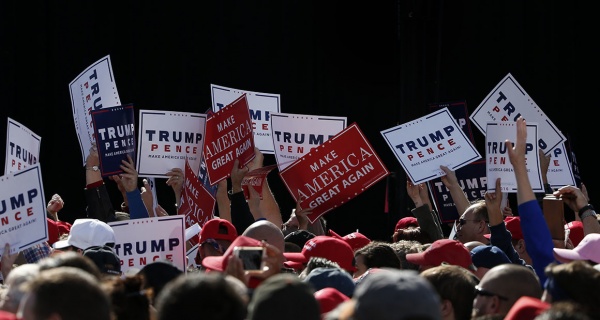 You know Paul Rudnick from his work on movies like Addams Family Values, The First Wives Club, In & Out, and the screen version of his play Jeffrey. He’s written many other things, all of them funny and smart.  His astute observations have turned to politics and Trump’s toxic influence on America. Here’s his latest…

“With each passing day and every fresh outrage, the country is growing more uncontrollably angry and divided. So I’ve asked myself: do I really believe that all Trump supporters are viciously racist, misogynist, LGBTQ-hating idiots, satisfied only by the most hollow forms of entitled, mindless, Middle American vengeance?

Or are these voters the innocent, unheard, overlooked masses, ignored by the elites as they lost their jobs, homes and futures?

None of this is what’s fueling my anger or, I suspect, the bitterness of so many people on the left. The anger isn’t the result of sour grapes or helplessness, either.

The anger is caused by a single basic fact. If I agree, or at least entertain the idea, that Trump voters had genuine grievances and hardscrabble lives, there’s still something I can’t forgive. They saw who Trump was, they knew exactly what he stood for, and they chose him.

When I’ve talked to Trump voters, they often explain that they were rolling the dice, that they were sick of politics as usual, and that Trump felt like something new. If Trump was a truly fresh face, someone who arrived from nowhere, as a genuine populist hero, I could understand this hope, this betting on change.

But Trump? Every American knew he was a blowhard, whose businesses constantly went bankrupt; they knew that he abused women and never thought of anyone but himself. They knew that his rallies were ignited by the worst lynch mob mentality, and that he celebrated not America, but hatred. And they excused these facts or ignored them or claimed they were manufactured, but they knew. They had a choice and they chose Trump.

Even if you hated Hillary or didn’t trust her or thought she was a political hack, she wasn’t Trump. She wasn’t worse. She wasn’t a proven, inept embarassment. If nothing else, her service to America was indisputable. Trump has never done anything for anyone: this was who you favored, to represent our country?

That choice is what can’t be forgiven, because every day, that choice erodes our nation’s stability and dignity. None of Trump’s actions have been even the slightest surprise: not the fact that he champions white supremacists, or busily provokes a possible nuclear war, or mocks people suffering from a hurricane’s devastation.

Trump’s supporters are too cowardly to admit their mistake, so they blame fake news, or the Democrats, or, as one guy told me,

“So what? It’s business as usual. Hillary would have been just as bad.”

Which isn’t true. No one would have been as bad. America isn’t being torn apart by policy disputes over taxes or healthcare, or an impasse between political parties; we’re suffering from the most sickening shame, and that can’t be healed by “understanding” or “reaching out” or “listening to the other side.”

With Trump, there is no other side.