Why Does The Media Try To Rationalize Trump's Out Of Control Behavior? 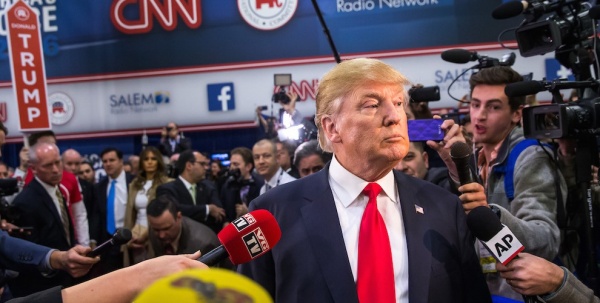 Whenever President Trump lashes out against someone or something in a way that defies traditional expectations for presidential behavior — for instance, his decision to criticize the mayor of San Juan, Puerto Rico, on Saturday morning after her town was just devastated by Hurricane Maria — it yields a debate about what was behind it. After Trump’s series of attacks on the NFL and its players earlier this month, for example, there were two major theories about what motivated his conduct.

The first theory is that it was a deliberate political tactic — or as a New York Times headline put it, “a calculated attempt to shore up his base.” We often hear theories like this after Trump does or says something controversial or outrageous. His response to the white supremacist rally in Charlottesville, Virginia, in August was sometimes explained in this way, for example. “Mr. Trump has always appreciated the emotional pull of questioning bias and fairness, especially with his white working-class base,” the Times wrote, portraying Charlottesville as an issue that drove a wedge between the Trumpian and the Republican establishment.

It’s also often claimed that Trump leans into controversies such as the NFL protests as a way to distract the media from other, more serious issues, such as the repeated Republican failures to repeal Obamacare, or the various investigations into Trump’s dealings with Russia. These claims also assume that Trump’s actions are calculated and deliberate — that he’s a clever media manipulator, always staying one step ahead of editors in Washington and New York.

The second theory is that the response was impulsive and primarily emotional. Trump initially began criticizing the NFL and NFL players at a rally last Friday in Huntsville, Alabama, including referring (although not by name) to former San Francisco 49ers quarterback Colin Kaepernick as a “son of a bitch” for protesting during the national anthem. Perhaps encouraged by the raucous response he received from the crowd, Trump went on a tweetstorm about the NFL, its owners and its players that lasted intermittently over the next several days. Somewhere along the way, he also disinvited former NBA MVP Stephen Curry from attending the White House ceremony scheduled to honor the NBA Champion Golden State Warriors. (Curry had already said that he didn’t like what Trump stood for and didn’t plan to attend.)

Not all of this — particularly not roping the popular Curry into the controversy — necessarily seemed all that “calculated” to me. Instead, it seemed to fit a different behavioral pattern: Trump is piqued by criticism and rarely backs down, especially when he’s challenged by women or minorities — such as Curry, the predominantly black NFL player pool, ESPN’s Jemele Hill, Khizr and Ghazala Khan, Judge Gonzalo B. Curiel, London Mayor Sadiq Khan, former Fox News anchor Megyn Kelly or Massachusetts Senator Elizabeth Warren, to take some of many examples.

I know what you, as an analytically inclined FiveThirtyEight reader, are probably thinking: Are these theories necessarily mutually exclusive? Couldn’t these responses reflect fits of emotional pique on Trump’s behalf — and yet also have the effect of pleasing his base, or distracting the media from health care and Russia?

Sure, they could. Trump’s base support isn’t quite as immovable as some pundits seem to assume — but public opinion on many issues such as Charlottesville quickly polarizes itself along partisan lines. And Trump’s tweets and insults often have the effect of upending the news cycle; covering Trump is in some sense covering one distraction after another.

But the theories are in conflict because they’re about the intent and motivation for Trump’s behavior and not necessarily its effects. The first theory says that Trump is calculating and rational; the second says that he’s impulsive and emotional. The first theory implies that Trump may be employing “racially charged” rhetoric and actions for political gain. The second implies that Trump himself may harbor degrees of racial resentment, and resentment toward women, and that it colors his response to news events. Either way, Trump’s actions could be politically effective or ineffective. (Trump’s approval rating declined slightly this week after his NFL comments, although it’s hard to know if they’re the reason why.) However, it seems important to know what motivates them. If Trump’s actions are driven by emotional outbursts more than calculated trollishness, that might predict a different response to how he deals with escalating tensions with North Korea, for example.

After Trump’s NFL remarks, you really could have argued either theory. In addition to the racial dynamics at play, Trump has some personal grievances with the NFL, including his failure to purchase an NFL franchise. But the protests from Kaepernick and others have been unpopular, and the response to them has been highly partisan. One can imagine Trump thinking it was effective politics to bring them up as a wedge issue, especially at a political rally in Alabama.

It’s much harder to describe some of Trump’s other outbursts — like those against the Khan family or Judge Curiel, for example — as representing a calculated political strategy. The same goes for Trump’s tweetstorm on Saturday morning about San Juan mayor Carmen Yulín Cruz, who had criticized the White House’s response to Hurricane Maria.

No matter how cynical one is, it’s hard to see what possible political benefit Trump could get from criticizing Cruz, whose city was devastated by Maria and remains largely without power and otherwise in crisis. Nor is the government’s response to Maria necessarily something that Trump wants to draw a lot of attention to. I’ve seen debates back and forth in the media over the past week about whether Trump’s response to Maria is analogous to the one former President George W. Bush had to Hurricane Katrina in 2005. Trump’s dismissiveness toward Cruz almost certainly won’t help his side of the argument; instead, it will amplify growing criticism about how the government handled Puerto Rico and why Trump seemed to be more interested in the NFL protests than in his administration’s hurricane recovery plan.

I’m happy to acknowledge that Trump’s responses to the news are sometimes thought-out and deliberate. His criticisms of the media often seem to fall into this category, for example, since they’re sure to get widespread coverage and Republican voters have overwhelmingly lost faith in the media.

But at many other times, journalists come up with overly convoluted explanations for Trump’s behavior (“this seemingly self-destructive emotional outburst is actually a clever political strategy!”) when simpler ones will suffice (“this is a self-destructive emotional outburst.”). In doing so, they violate both Ockham’s razor1 and Hanlon’s razor — the latter of which can be stated as “never attribute to malice that which is adequately explained by stupidity.” One can understand why journalists who rely on having close access to Trump avoid explanations that portray Trump as being irrational, incompetent or bigoted. But sometimes they’re the only explanations that make sense.