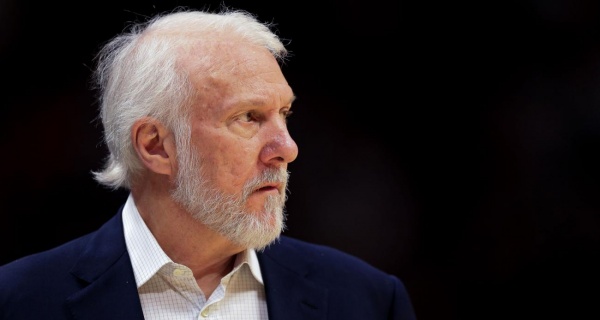 "Our country is an embarrassment in the world," Popovich said of Trump during his press conference at the onset of Spurs training camp Monday, ESPN reports.

"This is an individual that when people held arms during games, [Trump] thought that they were doing it to honor the flag. That's delusional. But it's what we have to live with. You've got a choice: We can continue to bounce our heads off the walls with his conduct, or we can decide the institutions of our country are more important, people are more important, [the] decent America we all have and want is more important – get down to business at the grassroots level and do what we have to do."

Popovich also slammed Trump's "childishness and the gratuitous fear-mongering and race-baiting [that] has been so consistent that it's almost expected."

During his press conference, Popovich deftly handled questions regarding athletes' right to protest social injustice ("There's no recrimination") and the upcoming Spurs season, as well as the factors that led to Trump's election. "A lot of people had a problem. He was the right guy at the right time to tap into that mood," Popovich said. "People overlooked one hell of a lot to be able to pull that trigger and vote in that direction. They wanted change, they felt ignored… But at what price?"

"I'm an individual. I live in this country. I have a right to say and do what I want. It has nothing to do with my position," Popovich added. "Obviously, race is the elephant in the room, and we all understand that unless it is talked about constantly, it is not going to get better. People get bored, 'Oh, is it that again? They are pulling the race card.' Because it's uncomfortable, there has be an uncomfortable element in the discourse for anything to change. Whether it is LGBT, women's suffrage, race, [it] doesn't matter. People have to be made to feel uncomfortable; especially white people."

Popovich added on racial inequality, which is the root of the anthem protests, "We still have no clue what being born white means. If you read some of the recent literature, there is no such thing as whiteness. But we made it up. Not my original thought, but it's true. Because you were born white, you have advantages systemically, culturally, psychology there. They have been built up for hundreds of years. Many people can't look at it. [It] can't be something on their plate on a daily basis. People want their status quo. People don't want to give it up. Until it's given up, it's not going to be fixed."

The coach also compared being born white to having a 30-meter lead on a 100-meter dash.

Following the 2016 election, Popovich spoke frankly Trump's victory, saying it made him "sick to my stomach."

"Not basically because the Republicans won or anything, but the disgusting tenure and tone and all of the comments that have been xenophobic, homophobic, racist, misogynistic," Popovich said. "I live in that country where half of the people ignored all of that to elect someone. That's the scariest part of the whole thing to me."