A Solution For The High Cost Of Prescription Drugs 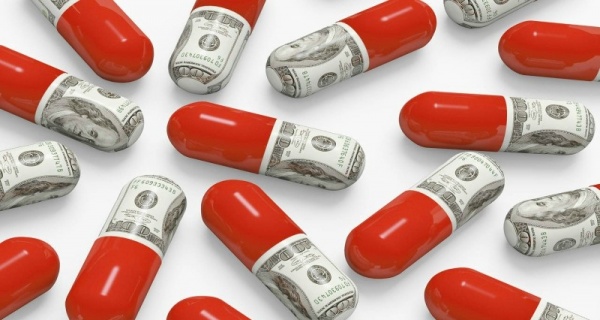 Date Posted: Monday, September 25th, 2017
In 2015, CEO of Turing Pharmaceuticals Martin Shkreli infamously raised the price of the life-saving drug Daraprim by 5,000%. Daraprim, developed more than 60 years ago, is used to treat the deadly parasitic infection toxoplasmosis. It was selling for $13.50 a pill; then Turing raised the price to $750. The move sparked massive backlash and Congressional hearings, and Shkreli himself was eventually arrested for, and convicted of, unrelated securities fraud charges. But the original, horrible problem didn’t get fixed. Turing kept the price sky-high; as of August 2016, many patients were paying $375 per pill.
Shkreli is not an outlier, according to Indiana University law professor Fran Quigley’s new book Prescription for the People. The pharmaceutical industry jacks up prices on life-saving drugs to extort windfall profits from desperate patients as a matter of course. That’s an immoral way to treat medicine, Quigley argues.
The solution? Stop treating treating medicine as private property—and start treating it as a public good, like education or infrastructure.

“Choice is not present when the good in question is life-or-death.”

It’s one thing to allow private companies and markets to set prices for items like big-screen TVs or cars, Quigley explains via email. In those cases, “purchasers can compare prices and walk away from the transaction if they wish.” But a patient with cancer or a child diagnosed with Type II diabetes can’t just walk away. “That kind of choice is not present when the good in question is life-or-death and there are no options for comparison shopping,” he writes.
Societies generally accept that it’s in the best interests of the public to ensure that patients have access to medicine. The US, for example, spends an enormous amount of money on developing new medicines and treatments. The National Institutes of Health spends $32 billion a year on medical research.
But the taxpayer dollars invested in medical research do not necessarily benefit Americans. For example, Quigley’s book explains that government research provided the basic breakthroughs in the creation of sofosbuvir, a drug that cures hepatitis C in 90% of patients. But Gilead, the pharmaceutical company which produces sofosbuvir, prices the drug at $1,000 per pill—1,000 times its manufacturing costs. American citizens paid to develop the drug, and now pharmaceutical companies sell it back to them at exorbitant prices. Many can’t afford it. A 2015 Senate study found that only 2% of Medicaid patients with hepatitis C receive the drug because of its high cost.
While patients suffer, the drug companies are thriving. Pharmaceutical companies were among the most profitable industries in the US in 2016. Drug companies claim they need to keep medicine prices high to invest in research. But, Quigley points out, they don’t actually funnel the bulk of their profits into research and development. In 2016, Reuters reported that Pfizer, which made $45.7 billion in revenue in 2014, spent $14.1 billion on sales and marketing that year. By contrast, it spent only $8.4 billion on research. Much of the money drug companies spend on research isn’t even on medicine that’s essential to patients’ health. Instead, companies focus their attentions on hair loss and infertility treatments, since those are surefire sellers to wealthy consumers. They let the government do the difficult, costly research on life-saving drugs for the global poor.
How did we get to this point?
“In the last 40 years, the pharmaceutical industry has deployed billions of dollars of lobbying and political campaign contributions” to change laws to their benefit, Quigley says. One of their most remarkable successes was the 1980 Bayh-Dole Act, which allowed corporations to patent publicly-funded research. This means that pharmaceutical corporations essentially receive monopolies to sell government-created products, “truly one of the most bullet-proof business models in modern history,” Quigley says.
The pharmaceutical industry has also used its influence to force other countries to acquiesce to the new drug regime through trade deals. The US has aggressively pressured countries like India and Brazil to stop legalizing generic versions of medicines patented by US companies. Much of the grassroots opposition to the Trans Pacific Partnership trade deal was due to its pharma giveaways, which forced foreign countries to accept drug company patent extensions.
All this means that US policy has brought about a global health crisis, in which pharmaceutical companies get rich while patients and public health suffer. As long as medicine is seen as the private property of massive corporations, there’s not much that can be done. Shkreli’s legal obligation was to his shareholders, who profited massively when he raised medicine prices as high as they would go. From a legal perspective, he did what he was supposed to. Businesspeople focus on the bottom line, not on people’s lives.
But if we are willing to see public health as more important than corporate profits, there are a great deal of policy changes to be made. For example, the US government has a right to permit companies to manufacture generic versions of any taxpayer-funded medicine, regardless of whether other corporations hold a patent on the drug. It could start doing so tomorrow, if it wanted. Congress could also repeal the 2003 law that prevents Medicare from negotiating to lower the cost of prescription medicine.

“The patent system fails miserably in making medicines available to those who need them.”

The US should even consider ending medicine patents altogether, Quigley argues. “The patent system fails miserably in making medicines available to those who need them,” he says. Studies show that 70% of newly marketed drugs make no therapeutic advances on existing medicines; they are “me-too” drugs that try to carve out a portion of already existing markets for things like cholesterol medication, without bringing any improvements to the table. Furthermore, patents prevent competitors from building on previous research. Expanding grants for patent-free, open-source research would focus medical research on innovation, and make research findings available to everyone immediately, Quigley argues.
This may seem like a pipe dream, given the pharmaceutical industry’s stranglehold on Congress. But the outrage at Shkreli shows that people do have a gut-level understanding that medicine should be treated like a public good. And looking abroad, there are examples of successful campaigns for change.
One activist in India won a recent victory to increase access to imatinib mesylate, a leukemia medication. Novartis, which holds the patent on the medicine, sold its version, Glivec, for up to $70,000 a year, while generic Indian versions were only $2,500 a year. Novartis wanted to extend its patent by making a small alteration to the drug. An Indian court ruled against it in 2006, prompting years of court and public battles, in which activists circulated petitions, enlisted the aid of international organizations like Doctors Without Borders, and obtained the support of the researcher who had originally developed the medication. In 2013, the Supreme Court of India ruled against Novartis, preventing drug companies from extending patents based on minor drug changes.
India’s court recognized that the public has a strong interest in access to medicine—an interest that is at least as important as a pharmaceutical company’s expansive property rights claims. It’s high time that the US began to face the moral implications of the way it treats medicine. In a 1955 interview with Edward R. Murrow, the medical researcher Jonas Salk, who developed a polio vaccine, memorably declared that he did not patent the vaccine because it belonged to the people. “Could you patent the sun?” he asked rhetorically. Pharmaceutical companies might indeed give patenting the sun a try. But there’s no reason the rest of us have to let them.