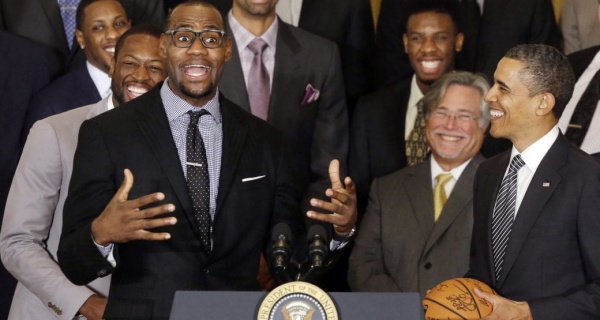 LeBron James responded Saturday to President Donald Trump's comments on the Golden State Warriors and Stephen Curry by calling Trump a "bum" and suggesting it was no longer an honor to visit the White House.

Trump tweeted Saturday morning that he had "withdrawn" his invitation to the Warriors to visit the White House and celebrate their 2017 championship win.

"Going to the White House is considered a great honor for a championship team.Stephen Curry is hesitating,therefore invitation is withdrawn!" Trump tweeted.

While it was unclear whether or not Trump actually extended an invitation to the Warriors, Curry told ESPN on Friday that he did not want to attend the ceremony if it happened. James pointed to those comments in his response to the president.

"U bum @StephenCurry30 already said he ain't going! So therefore ain't no invite," tweeted James, the three-time NBA champion. "Going to White House was a great honor until you showed up!"

James, whose Cleveland Cavaliers lost to the Warriors in the NBA Finals, was a vocal supporter of Democratic presidential nominee Hillary Clinton and visited the White House during President Barack Obama's tenure.

In the past, Trump has called James "a great player and a great guy."

Other NBA players also spoke out after Trump's tweet. James' teammate JR Smith implored Obama to come back to the White House.

"@BarackObama we need you back ASAP," Smith tweeted.

"With everything that's going on in our country, why are YOU focused on who's kneeling and visiting the White House??? #StayInYoLane," Paul said. "And I doubt he's man enough to call any of those players a son of a b---- to their face..."

Curry himself has not responded to the president's comments.