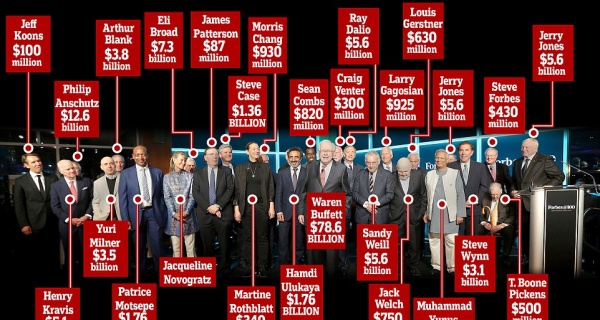 Date Posted: Thursday, September 21st, 2017
The place to be Tuesday night in Manhattan wasn't uptown near the UN - but rather downtown where dozens of the richest and most important people in the world were gathered at Chelsea Piers to celebrate the magazine that celebrates capitalism .
Billionaire Warren Buffett was joined by a roll call of the world's richest people on to celebrate Forbes' 100 anniversary.
Among those on stage were billionaires Hamdi Ulukaya, CEO of Chobani; Vegas tycoon Steve Wynn, CEO of Wynn Resorts; Cowboys owner Jerry Jones, former GE boss Jack Welch; entrepreneur and investor Philip Anschutz; Russian entrepreneur Yuri Milner and investor Ray Dalio.
Joining the billionaires on stage was Sean 'Diddy' Combs, who's worth $820million.
The net worth of the people on stage when Buffett spoke totaled $147billion.
Onstage was (from left in the picture above) Jeff Koons, Henry Kravis, Philip Anschutz, Yuri Milner, Arthur Blank, Patrice Motsepe, Jacqueline Novogratz, Eli Broad, James Patterson, Steve Case, Martine Rothblatt, Hamdi Ulukaya, Sean 'Diddy' Combs, Buffet, Craig Venter, Ray Dalio, Sandy Weill, Larry Gagosian, Jack Welch, Mohammad Yunus, Steve Wynn and Jerry Jones
The event on Tuesday at Manhattan's Pier Sixty was a celebration of the business magazine's 100th anniversary, as well as an annual philanthropy summit which had been held earlier in the day.
The gala coincided with the release of a special edition of Forbes honoring '100 of the world's greatest living business minds.'
The list includes some of the biggest names in the business world and philanthropy, including Sheldon Adelson, Jeff Bezos, Bill Gates, Michael Bloomberg, Bono, Michael Dell, Diddy, Giorgio Armani, Barry Diller, Rupert Murdoch, Elon Musk, Paul McCartney, Mark Zuckerberg, Oprah Winfrey, and Richard Branson.
Buffett is on the cover of the special centennial edition.
As part of the entertainment for the night, Buffett joined pop music legend Stevie Wonder for a duet at the star-studded gala. Wonder and Buffett sang a duet of the classic hit The Glory of Love, a single written by Billy Hill and first recorded by Benny Goodman in 1936.
In his remarks to those attending the gala, Buffett expressed optimism about the future of the United States in an era of global instability.
'Whenever I hear people talk pessimistically about this country, I think they're out of their mind,' the 'Sage of Omaha' said on Tuesday night.
The billionaire has transformed Berkshire since 1965 from a failing textile company into a conglomerate with more than 90 businesses in such sectors as insurance, railroads, energy and retail, and well over $100billion of stocks.
Buffett said he expects the Dow Jones Industrial Average to be 'over 1 million' in 100 years, up from Tuesday's close of 22,370.80.
He said that's not unreasonable, given how the index was roughly 81 a century ago.
But he knows he won't be around to see it happen.
'When I hear talking about making it to 100, I get excited,' he said. 'I'm 87.'
Buffett said he recently determined that of the 53,364 people in the United States who were at least 100 years old, the ratio of women to men was nearly 5-to-1.
'We should start thinking about a sex change,' Buffett said, prompting laughter.
Nonetheless, he said long-term investing remains the way to go.
He noted that since Forbes created its first list of the 400 richest Americans in 1982 -- Buffett was worth just $250 million then - some 1,500 different people have been included.
Among those in attendance was Sean 'P Diddy' Combs. The rapper and entrepreneur formerly known as Puff Daddy was named to Forbes' list of 100 most brilliant business minds. Besides hip hop music, Combs has branched out to other industries including fashion and liquor. Diddy couldn't hide his delight in being included in such esteemed company and planted a huge kiss on Steve Forbes' cheek when he was called to the stage
"You don't see any short sellers," he said, referring to people who bet stock prices will fall. "Being short America has been a loser's game. I predict to you it will continue to be a loser's game."
Also in attendance were actor and philanthropist Matt Damon; Malala Yousafzai, Co-Founder, Malala Fund; Stephen A. Schwarzman, Chairman, Co-Founder & CEO, Blackstone; James Simons, Chairman, Simons Foundation; Patrice Motsepe, Founder, Motsepe Foundation; and Muhammad Yunus, Founder, Grameen Bank. Damon and Gary White, who co-founded Water.org and WaterEquity, received a Forbes 400 Lifetime Achievement Award for Social Entrepreneurship. Eli Broad, founder of The Eli and Edythe Broad Foundation, received the Forbes 400 Lifetime Achievement Award for Philanthropy.