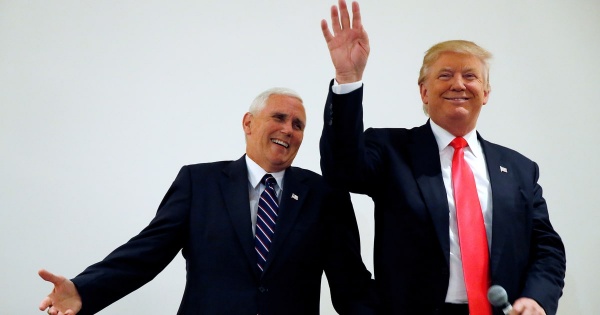 Despite his banal demeanor, Mike Pence's hands are just as unclean as those of anyone else in this administration regarding the multiple lies and deepening deceit around the Trump campaign, the White House, and Russia.

Standing up next to Donald Trump can be a good thing — in that basically anyone would look better in light of Trump’s ignorance, crassness, and blatant love for obvious and appalling lies.

Mike Pence has benefitted from that comparison in much of the corporate media coverage of the Trump campaign, now the Trump White House, regarding the Russia investigation in particular. Rather than Trump’s bluster and pomposity, Pence tells his lies with a calm and collected voice, and a carefully crafted facial expression to make you think you’re hurting his feelings if you question his honesty.

But behind that more pleasant façade, Pence has always been just as dangerous and despicable as his boss.

In fact, in many ways and because of the benefit of seeming more palatable, Pence is Trump’s worse half.

As all of Pence’s lies and deceit continue to pile up, and possibly seal his fate, his press secretary recently announced his resignation. The claim is that this will provide a “tremendous opportunity” to serve from “outside of the administration.”

Apparently, the timing, coming as the special counsel’s investigation gets closer and closer to Pence, is merely a coincidence.

But Rachel Maddow has had Pence’s number for a long time. Back in May, she ran through a litany of his biggest lies, calling him out for “blunt, direct, false statements” made both during and after the election.

Four months later, that list has grown exponentially, and Maddow is making sure that people do not let themselves be swayed by Pence’s placid voice into forgetting about his equal complicity.

“And for all the turmoil in this White House, and all of the scandals about various people quitting and the disappearances of all these senior staff, Vice President Mike Pence has been caught out in way more of these scandals than his bland beltway press coverage would have you believe,” Maddow noted.

And that involvement goes back to the beginning of the administration. From former National Security Adviser Mike Flynn’s departure in disgrace after being found out as a paid foreign agent, to discussions of sanctions with Russia during the transition, to contacts between the campaign and Russia before the election, to the firing of FBI Director James Comey — Pence has lied to the American people over and over, with glib ease.

And all of those lies Maddow delineated do not even give a complete picture, which takes an even darker turn when the subject of Mike Flynn, Jr., comes up.

“Oh, but wait, there’s more!” Maddow warns. Flynn, Jr., while he was serving on the Trump transition team, was one of the biggest peddlers of the repugnant conspiracy theory about a child sex abuse ring run by Hillary Clinton and John Podesta.

“Again and again and again, Vice President Pence really has made brazenly untrue public statements about some of the most controversial elements of this new administration, and the Russia scandal specifically,” Maddow declared.

That mountain of lies and deceit may have protected Pence from harsher media coverage.

But it won’t protect him from the special counsel, who is closing in on anyone in Trump’s circle who may have lied about connections to Russia. Indeed, Pence ought to be front and center in such a dragnet.

Pence has been implicated in the cover up of the Comey firing, he’s changed his story on Russia multiple times as it suited him, and he may already have set himself up for impeachment — which would sure put a damper on that shadow campaign for the presidency he insists he’s not running.

Pence may look like a nice guy when you compare him to Trump, but that is the lowest of low bars. The fact is, he’s just as skilled and insidious a liar as his boss, and everyone needs to keep their eyes — and ears — on him.