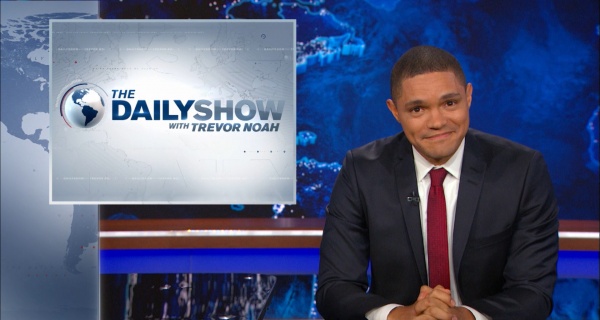 After President Trump made a debt-ceiling deal with Democrats last week, White House Press Secretary Sarah Huckabee Sanders praised his bipartisanship. "Wow, one deal, now he's Mr. Bipartisan?" Trevor Noah mused on Thursday's Daily Show. "You can't call someone a philanthropist just because they toss a quarter at a homeless person." Still, Trump was "so turned on by all of the positive press," he said, the president gave bipartisanship another go on Wednesday.

Trump, the "master negotiator" didn't "just give in to the Democrats" on DACA and not funding his border wall at Wednesday's night's dinner, "he came out sounding like they converted him," Noah said. So DACA stays, the wall doesn't, everyone's happy, he added. "Well, except for all the people who voted for him."

Trump must have noticed the outrage, because he spent all day trying to assure his supporters, not necessarily cogently. "There is an enormous wall between me and what President Trump just said," Noah said. "He sounded less like a president and more like a general contractor who's missed every deadline. Okay, from what I gather, there is no wall, but he's renovating a wall that, when complete, will become a fence, and then somebody else will pay for it?" he said, taking a stab. "I guess in many ways, Sarah Huckabee Sanders is right about Trump being bipartisan, because both sides of the country want to impeach his a**."