Lawless Sheriffs Free To Roam The Streets Of America 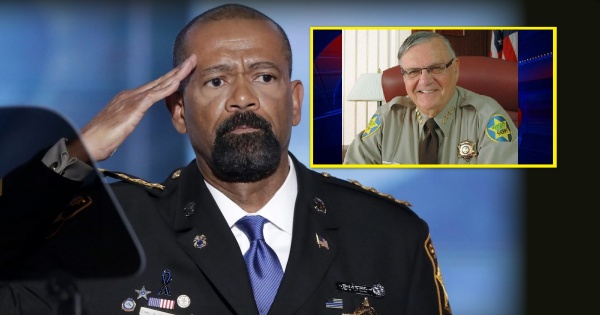 Trump's pardon of former Maricopa County Sheriff Joe Arpaio, who was criminally convicted for defying a federal court order, amounted to a presidential endorsement of Arpaio's longstanding unconstitutional practices of racial profiling and prisoner abuse. It also sent a less recognized message to a growing subset of the anti-government extremist movement: the self-proclaimed "constitutional sheriffs," among whom Arpaio is a prominent figure.

Arpaio helped found the Constitutional Sheriffs and Peace Officers Association, a group of county-level law enforcement officers who believe that, because they are elected, the authority they hold in their counties exceeds that of both the state and federal government. Led by fellow former sheriff Richard Mack, CSPOA promotes a dangerously wacky interpretation of the Constitution in which sheriffs have the authority to determine whether a law is constitutional, to decide whether to enforce or obey it, and to order federal or state law enforcement officials who try to enforce the law out of their counties. Mack has written that "the greatest threat we face today is not terrorists; it is our own federal government."

This unsupportable theory of county supremacy has its roots in the Posse Comitatus – meaning "force of the county" – movement of the Seventies and Eighties. The group was established to defend against perceived attacks on the rights of white Christians by the racist and anti-Semitic William Potter Gale, who went on to be a leader in the militia movement of the Nineties. Gale wrote – under the pen name Col. Ben Cameron, taken from a character in the infamous racist film Birth of a Nation – that "the county Sheriff is the ONLY LEGAL LAW ENFORCEMENT OFFICER IN THE UNITED STATES OF AMERICA!" He went on to explain that the sheriff must form a posse made up of citizens in his jurisdiction and that anyone opposing such "Christian posses" should be considered a "domestic enemy."

Arpaio's embrace of the Posse Comitatus ideology is evident both in the way he sought to enforce his preferred interpretation of the law, and in his open defiance of courts that fulfilled their duty to stop him. He referred to himself as a "constitutional sheriff" and established a 1,000-person force of civilian volunteers – many of them armed – who fundraised for their own law enforcement-like uniforms and patrol cars. Arpaio utilized his posse members for missions ranging from armed patrols of schools after the Sandy Hook shooting to investigating the authenticity of President Obama's birth certificate in Hawaii.

Arpaio further demonstrated his embrace of sheriff supremacy after a court ordered him to cease immigration patrols in which his deputies detained individuals appearing to be Hispanic on suspicion of being in the country illegally (which is a civil violation outside Arpaio's jurisdiction, not a crime). Arpaio responded by disparaging the court and repeatedly announcing his non-compliance with the order in public, bragging he would "never give in to control by the federal government."

When Arpaio was subsequently charged with contempt, he strangely suggested that defying the court order was not a violation of his oath of office. As law professor Robert L. Tsai has pointed out, this is in keeping with the bizarre legal theory of Arpaio and the CSPOA that a sheriff's oath of office gives him the right to ignore federal courts and enforce the laws and the Constitution as he sees fit, accountable to no one.

The CSPOA claims the support of about 400 of the country's more than 3,000 sheriffs. While this is likely an exaggeration, the group is certainly growing and expanding its efforts to train sheriffs in its constitutional theory of sheriff supremacy. Individual sheriffs have demonstrated they are increasingly emboldened to defy federal and state law. For example, one sheriff stood with armed civilians trespassing on federal land to protest the Bureau of Land Management. Others have thwarted enforcement of gun and tax laws.

Worse, the "constitutional sheriffs" are part of a larger movement that anti-government extremism expert JJ MacNab says is certain to feel legitimized by the Arpaio pardon and other steps Trump has taken that mainstream the movement.

The CSPOA shares management and board members with the Oath Keepers, a much larger subset of the anti-government extremist movement. Like the CSPOA, the quasi-militia group formed amid the surge of anti-government extremist organizing that followed the election of Barack Obama, and was further invigorated by fears of increased gun control after the Sandy Hook shooting. The CSPOA and Oath Keepers are compatriots in this larger movement with the militants who stood by white supremacists in Charlottesville, the Bundys and their supporters who engaged in armed standoffs with law enforcement, and "sovereign citizens" like Oklahoma City bomber Terry Nichols, whom the FBI currently considers one of the country's greatest domestic terrorism threats.

MacNab, whose upcoming book is titled The Seditionists: Inside the Explosive World of Government Extremism in America, tells Rolling Stone the actions of Trump and his associates will embolden the anti-government extremist movement. Beyond pardoning prominent movement figure Arpaio, the president elevated the profile of David Clarke, the CSPOA's 2013 "Sheriff of the Year," who has been accused of prisoner abuse. Trump embraced Clarke as a campaign surrogate, giving him a speaking slot at the Republican National Convention and considering him for a role in his administration. Trump confidante Roger Stone, who argued for the Arpaio pardon, has also advocated for pardons for the Bundys and the supporters who joined them in aiming weapons at federal officials during their occupation of the Malheur National Wildlife Refuge. These groups have adopted a theory of the Constitution to justify violence that MacNab says are "marginal and kooky – until you have someone like Trump elevate it to mainstream."

MacNab worries not enough attention is being paid to Trump's overtures to anti-government extremists, who are better established and could be even more dangerous as a group than the confederacy supporters and alt-right figures the president defended after Charlottesville.

Trump likely doesn't realize what a dangerous game he's playing by mainstreaming the constitutional sheriffs and their fellow travelers. Trump may share their view that Washington is overreaching and corrupt, but given his demonstrated belief that he enjoys nearly unlimited power, it's doubtful he's aware Arpaio and Clarke ascribe to a fringe theory of the Constitution that entitles them to defy the president and other federal officials. More likely, Trump appreciates their tough-guy policing but knows little about the movement from whence they came. The Trump administration's decision to take resources away from organizations focused on domestic extremism to focus solely on Islamic extremism suggests as much: Trump is undermining efforts to stop domestic terrorists while, perhaps inadvertently, emboldening them by blurring the lines between the fringe and the mainstream.

That could have serious consequences. MacNab points to the recent case of a member of the Three Percenter faction of the anti-government extremist movement whose hatred of the federal government drove him to try to blow up a building in Oklahoma. If anti-government extremists continue to be angered and emboldened in increasing numbers, eventually we'll see an attack the FBI isn't able to foil.