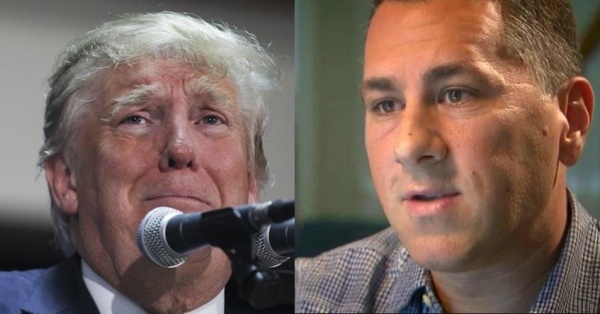 Progressive Pastor John Pavlovitz is making his life’s work calling out the hypocrisy of other “Christian” leaders as it pertains to their unwavering support of popular vote loser Donald Trump.

In his most recent post, he challenges evangelical leaders to “show us Donald Trump’s Christianity,” arguing that Trump’s behavior as President is incompatible with the Christian faith.

He points out that over the last year they endorsed Donald Trump’s campaign from their pulpits and social media platforms, and celebrated his election victory in sermons and in podcasts, then followed that up with 6 months of defending his policies, “sanctioned his behavior, and justified his tactics”, while at the same time claiming Trump is a man of God.

Here is the rest of Pastor John’s letter:

“Since you’ve been so vocal about Donald Trump being a Christian through all of this, care to tell us where you’ve actually seen it? Many of us have been wondering—as we’ve found evidence largely nonexistent.

– You could share the ways you seen him loving the least, or looking after the orphans and the widows in their distress, or showing compassion to the harassed and helpless, or welcoming the oppressed foreigner, or praying for his enemies— you know, basic reflecting Jesus kinda stuff.

– You might provide measurable evidence of the “fruit of the Spirit” (love, joy, peace, patience, kindness, goodness, faithfulness, gentleness, and self-control) that you see in him, in his Administration, his legislation, his treatment of people. (And by people, let’s say: those not white, wealthy—or you.)

– Maybe you’d care to unpack in detail how the blessed virtues of the Beatitudes are on display in his social media exchanges and his press conferences and his personal conduct—how he’s been a meek, merciful, pure in heart peacemaker.

– You could devote a 4-week sermon series at your church to reading the Sermon on the Mount, and highlighting how Donald Trump has replicated it all: how he’s shunned anger, how he’s avoided breaking promises, the way he’s turned his cheek in conflict, how he’s honored his (third) marriage, the way he hasn’t broadcast his prayers, how he’s avoided public boasting and quietly given to the needy, how he’s refrained from storing up earthly wealth, how he’s shown clear, tangible, beautiful fruit of his faith through a daily life that visibly resembles Jesus. (That would make for a great midweek small group study.)

You could try and do all that.

Or—if this proves to be too tall a task for you (which I imagine it probably will be), might I suggest a far easier route, reflecting a far more likely scenario:

Maybe you could just admit that nothing in him remotely resembles Jesus and never has.

You might confess that he’s never been a Christian by any measurement that matters—and that this fact has never mattered and still doesn’t matter to you.

Maybe you can admit that the Gospels tell the story of Jesus calling himself the Good Shepherd, defending the imperiled sheep from the wolves; from the religious opportunists who prey upon them—and that he and you probably aren’t the sheep or the shepherd in this story. You’re quite likely the wolves he stood in opposition to.

You could run through the 23rd chapter of the Gospel of Matthew and recall Jesus’ explicit, unrelenting condemnation of the hypocritical Pharisees who leveraged power and the fear of God to assail and exploit the faithful people entrusted to them—and you could cop to the fact that this is the probably the precarious place you’ve chosen to minister.

You might recall that the Bible tells of Judas betraying Jesus for a few pieces of silver—and admit that you may have sold your soul for a President’s ear and a Supreme Court Seat, and that you’re now lying in the bed you’ve made—that you’re probably more likely Judas in this story, than the other 11 who lived and died by emulating him.

You could remember that Jesus’ life was one marked by humility, compassion, and frugality; that he spent his time with the marginalized and the oppressed who were being victimized by a power-drunk Roman Government. You could admit that it’s fairly easy to see that Donald Trump and the Church and State conspiring with him in banning Muslims, taking away healthcare, gouging the environment, and expelling immigrants—they are Rome in this chapter of the story.

I’ve only been a Christian for forty years and a pastor for twenty of those, so forgive me if I’m missing some teaching resources you may have at your disposal that I don’t. It’s possible you have a gift of discernment that has yet eluded me. Maybe my eyes are still blind—and one day with your help I will clearly see.

Perhaps there’s some secret code I’m not cracking here that you can enlighten us all with.

And by us, I mean the great multitude watching all of this unfold; a disparate collection of Christians and non-Christians, of believers and Atheists, of people of every faith who smell something that really stinks here—like death it stinks.

We are all looking for Donald Trump’s Christianity.

We are Muslim families who were stranded at airports.

We are Transgender teens, terrified to use the bathroom in school.

We are Charlottesville marchers, violated by racial epithets, by steel pipes, and by vehicles—by supremacists the President defended.

We are mothers of children born ill, terrified of losing them because we lose the insurance that cares for them.

We are poor rural, suburban, and inner city kids wondering why we’re losing lunches, and arts programs, and aftercare.

We are families standing in waist-high water in Houston wondering why you’re he’s talking about building a wall.

We are terrified dreamers suddenly being ripped from the only home we’ve known and the country we’ve ever contributed to.

And we’re all here wondering what we’re missing; the supposed Jesus you see in this man, the Jesus you claim allows you to support him—the Jesus you’re selling while you do it all.

We don’t see anything in this man or his supporters, what looks like Jesus to us and we’d really like you to explain it in a way that makes any sense at all—and well, that might be a lot to ask.

Maybe you should pray why that is.

Maybe if you want to keep calling yourself a Christian leader—you can stop calling this President one.’