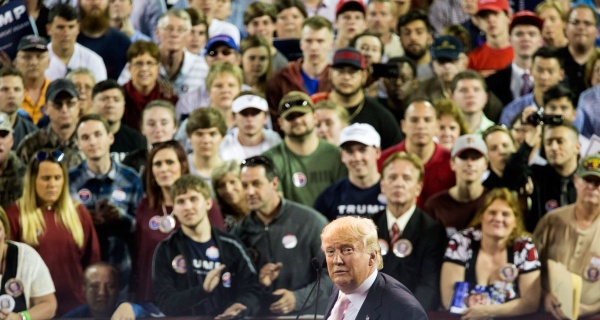 In what remains an infamous video clip more than a decade after it happened, Kanye West, in the midst of a televised fundraiser following 2005's devastating Hurricane Katrina, went off script (stunning his screen mate, Mike Myers) and proclaimed that then-President George Bush "doesn't care about black people." Now, as the effects of Hurricane Harvey come into full view in the Gulf, many Americans apparently think the same about the current president.

A new poll this week from The Economist/YouGov posed the question "How much do you think Donald Trump cares about the needs and problems of black people?" A majority of respondents—57 percent—said either "not at all" (38 percent) or "not much" (19 percent). Twenty-four percent said they believed Trump cared "some," while just 19 percent felt he cared "a lot."

It's worth noting that Trump recently came under fire for seemingly defending white supremacists who marched in Charlottesville, Virginia, by saying there were "very fine people on both sides" (among the marchers and counterprotesters). This came even after the right-wing marchers chanted Nazi slogans and a woman was killed after a reported white supremacist rammed a group of counterprotesters with a car.

Trump has said "racism is evil" but has regularly been accused of racism dating back to his real estate days—he was, for instance, sued twice by the Justice Department for not renting to black people. The president drew additional ire for his recent pardoning of Arizona Sheriff Joe Arpaio, who was convicted of racially profiling and was a brother-in-birtherism-arms with Trump.

The Economist/YouGov poll interviewed 1,500 U.S. adults from August 27 through 29. It had a margin of error of 3 percentage points