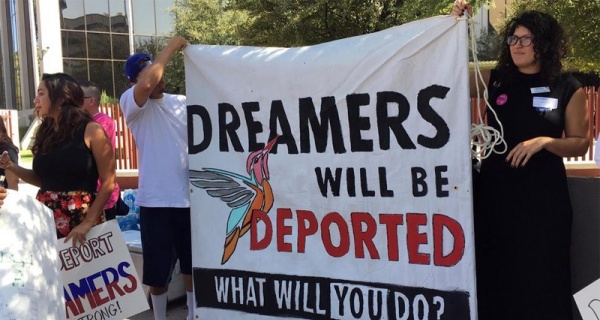 Date Posted: Tuesday, September 5th, 2017
The Trump administration is moving ahead with its retraction of the Deferred Action for Childhood Arrivals (DACA) immigration policy, which allowed people who’d immigrated to the United States as children the opportunity to receive work permits and two-year deportation deferrals. This is horrible, breathtakingly cruel, and of course a moral atrocity; like so much else this nightmare government has done or tried to do, it trades the well-being of millions of people for the good will of a hard core of vile racists. Everything about it is awful.
So maybe, like me, you found yourself reaching for “It’s political suicide!” as a form of meager consolation this morning. After all, poll after poll shows that something like eight out of 10 Americans agree with the basic premise of DACA: that people who come to this country as children ought to have the opportunity to stay and build lives and gain citizenship. Easier than listing all the vast swaths of voting-eligible Americans whom you could expect to be alienated from the Republican party by this decision is listing the ones that won’t: Nativists and pretty much nobody else. In absolute terms, that’s not a huge portion of the country’s population; it’s certainly smaller than the minority share of the vote Donald Trump received last November.
The problem is, the terms aren’t absolute. The context for all of this—not just the withdrawal of DACA, but the practical death of the Voting Rights Act’s enforceable protections; the innuendo about widespread voter fraud; the pardon of immigrant-brutalizing border sheriff Joe Arpaio, and what that signaled both to like-minded cops and to the communities they terrorize; the appointment of Confederate revanchist Jeff Sessions to head the Justice Department and his predictable gutting of its civil rights division; the immigration checkpoints along evacuation routes out of Houston; the assaults on equitable healthcare and the push to remove the tax burden from the wealthy; right-to-work laws; gerrymandering; the drug war; welfare reform; stop-and-frisk; and on and on and on—is a concerted effort to preserve the United States as a society in which only Nativist’s rights count for s**t, and where enough of them—us—can be counted upon to vote for whatever keeps it that way.
Donald Trump is a dog licking his own a**hole; he has no plan and could carry out no strategy more sophisticated than calling Richard Blumenthal a “total loser” on Twitter. All he knows how to do is jam the buttons that gratify him personally, and that always will be the surest way to interpret anything he does. But if you’re wondering why a career politician like Sessions will get behind a decision like this one, guaranteed to disgust most of the people who’ll be old enough to vote in most of the elections he will live to see, it isn’t only because he just loves racism that much. It’s because, in its own frenzied, cartoonishly villainous way, retracting DACA is entirely of a piece with the long game people like Jeff Sessions have been playing since before the 14th Amendment passed: making it harder, scarier, and more dangerous—if not downright impossible—for everyone but Nativist's and their kin get, keep, and exercise citizenship.
This has backfired once already, with the attempted repeal of the Affordable Care Act, an effort that, whatever noise anybody made about deficits or ideological preference for free markets, was first and fundamentally an attack on the security and well-being of groups despised by American conservatism. Regular people saved the healthcare program; as long as they speak out, political gravity still holds. But that result helps explain the larger project, and why Republicans by and large haven’t abandoned Trump even as he flails deeper into the toilet. How many fewer people might speak out against the next big legislative effort if they’re in prison, or if they live in fear that they might end up in another Joe Arpaio’s tent city just because a racist cop thinks they look Mexican, or if they’re afraid to take to the streets in protest because the cops might stand by while neo-Nazis literally shoot at them? How many fewer people might vote in 2018 or 2020?
Maybe they’ve got their math wrong; maybe, as even a dimwit like George W. Bush believed, their race identity voters simply don’t make up a large enough share of society to maintain power just by writing self-serving policy and scaring everybody else away from the polls. But for over 200 years it’s been pretty dependable math; even if it just barely delivered the 2016 election, it delivered it nonetheless. You don’t have to wait for the Walmart down the street to complete its transition into a concentration camp to see what the Republican vision for an ethno-state looks like; the signs of it are all around. It’s a society in which changing demographics don’t really count for anything, because practical access to democratic citizenship resides only with a certain class and everyone else lives in fear—of the police, of prison, of DHS, of losing their shi**y job, of an angry old man who can do what the television tells him to do with total impunity. Not to put too fine a point on it, it’s a society in which a white-nationalist failson can get elected president despite horrifying the majority of Americans badly enough to lose the popular vote altogether.
This is the actual Republican theory of government in action. It’s only political suicide if it doesn’t succeed as political murder first.
For more on this issue watch what Rachel Maddow has to say: