After Signing Order To Do More, Trump Cuts HBCU Support 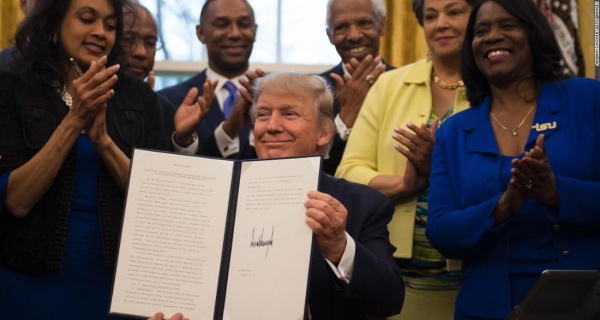 Date Posted: Sunday, September 3rd, 2017
The White House announced Friday it's switching up the format of an upcoming meeting between President Donald Trump and representatives of historically black colleges. The move comes as his administration continues to face deep criticism over its polarizing views on race relations in the U.S.
While the White House statement did not detail what modifications were being made, it did hint that the administration was looking to downsize Trump's meeting with the Historically Black Colleges and Universities (HCBUs). Trump found early success in reaching out to these schools, which were at times critical of his predecessor, but the Republican leader's attacks on their funding, controversial comments following last month's deadly white nationalist attack in Charlottesville, Virginia and his poor approval rating among black communities in general have strained this relationship.
"Responding to suggestions and feedback from many key stakeholders, the White House initiative on Historically Black Colleges and Universities (HBCUs) will modify its planned conference to best meet the current needs of HBCUs, their students and the broader HBCU community, " the administration said.
"This more intimate HBCU week will feature a series of strategic meetings for students and leaders to share their perspectives on the opportunities and challenges facing the HBCU community. The events will also focus on how the Administration can best work and support HBCU schools and students," it added.
Just over a month after coming to office earlier this year, Trump signed an executive order designed to boost federal funds for HCBUs. The move was seen as an opportunity for the Trump administration to win support of an influential black organization that often criticized his predecessor, President Barack Obama, for not sufficiently addressing the community's needs, despite him being the first black U.S. president. Trump's support, however, was short-lived.
The administration did not increase funds and actually cut Pel grant reserves and other crucial investment HBCUs had asked for, according to The Washington Post. In May, Trump signed a federal budget that controversially included language at the end suggesting he questioned the constitutionality of funding black colleges in the first place.
Recent national events have also highlighted the president's troubled relationship with a community he once famously tried to court on the campaign trail a year ago by asking "What the hell do you have to lose?"
On August 12, a man with white supremacist sympathies ran over a crowd of counter-protesters who were demonstrating against a massive far-right rally that swept the city of Charlottesville, Virginia. One woman was killed and over a dozen more injured. Trump condemned violence "on both sides" of the rally, remarks that garnered him considerable scorn even from within his own party.
These troubles have followed him to Washington. The Congressional Black Caucus may soon become one of the leading voices on the Hill calling for Trump's removal from office. Democratic Representative and Black Caucus leader Cedric Richmond of Louisiana said last month he was considering joining existing efforts to remove the president due to issues with Trump's "competency and fitness to serve."
He also vowed that the caucus would "keep its foot on the Trump administration’s neck by calling their racist and discriminatory policies what they are."
A poll released earlier this week by The Economist and market research company YouGov revealed that 57 percent of people in the U.S. think Trump doesn't care about the needs of black people. Among black respondents, three out of four said he either didn't care much or "not at all."