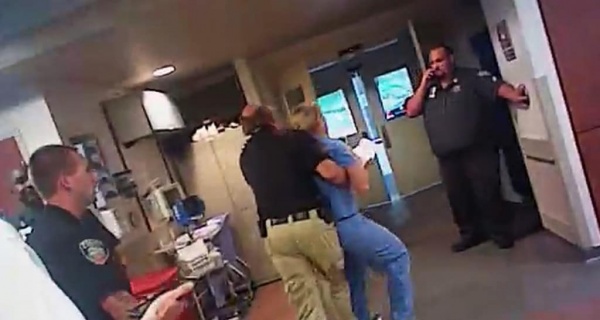 Date Posted: Saturday, September 2nd, 2017
Video from his body-cam was given to the news media by attorney Karra Porter during a press conference with nurse Alex Wubbels. She could be heard in the video screaming as she’s being hauled away, “You’re assaulting me, stop! I’ve done nothing wrong! This is crazy! This is crazy!”
Det. Payne came to the hospital to get a blood sample from a victim in a fatal car crash in Cache County that happened earlier in the day.
Wubbels, however, would not allow him to get that sample, saying he did not meet one of the three requirements for drawing blood. He didn’t have a warrant, the patient didn’t give consent and the patient was not under arrest.
Wubbels also had the backing of her bosses and many others in the hospital. One of them was on the phone with her and could be heard telling Det. Payne, “Sir, you are making a huge mistake right now.”
But Payne wouldn’t take no for an answer and that is when the arrest was made.
“I just feel betrayed, I feel angry and I feel a lot of things,” said Wubbels during the press conference. “The only job I have is to keep my patient safe. Blood is your blood. That is your property. When a patient comes in, in a critical state, that blood is extremely important. I don’t take it lightly.”
In the video, Payne’s partner was heard trying to calm his partner down during the arrest.
Another officer was heard saying, “I don’t think this arrest is going to stick.”
After the arrest, Payne said, “I wonder how this is going to affect my Gold Cross job.” Payne reportedly also works as an EMT with Gold Cross Ambulance.
He continued, “I bring patients here. I’ll bring them all the transients and bring good patients elsewhere.”
“I think there was definitely some alarm,” said Sgt. Brandon Shearer with the Salt Lake City Police Department about what happened. “We’ve been working with Ms. Wubbels and her attorney to make sure steps necessary so that something like this doesn’t happen in the future.”
Shearer says an internal investigation is now underway. He said Payne has been suspended for drawing blood, but no disciplinary action has been taken against him. He says that will all be resolved after the investigation is complete.
Wubbels said she’s very upset that none of the University of Utah officers came to her rescue and just stood by and watched it happen.
The University of Utah released the following statement:
“University of Utah Health supports Nurse Wubbels and her decision to focus first and foremost on the care and well-being of her patient. She followed procedures and protocols in this matter and was acting in her patient’s best interest. We have worked with our law enforcement partners on this issue to ensure an appropriate process for moving forward.”