A Peek Inside The Mind And Soul Of A Trump Supporter 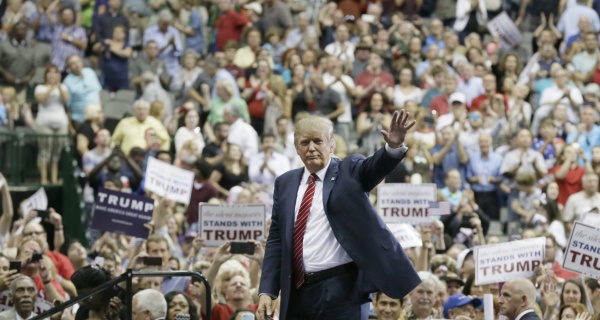 Tell me you are conservative. Tell me you are Christian. Tell me you are Republican. Tell me any of these things, and I won't make too many assumptions about you. Sure, I may assume you go to church every Sunday, eat red meat, and get most of your news from Fox and Friends, but beyond that, I will withhold judgment on the kind of person you are until I get to know you. In fact, as a Southern white male veteran who lives in a very rural area, most of the people in my circles are of the right-leaning variety. I can attest that most people are fairly decent when you get to know them.

This equation changes when you tell me unequivocally that you voted for Trump. Instantly, I know there are certain things about you and your character that I can assume that I wouldn't if you told me you supported any other GOP candidate. Ain’t none of them good.

Tell me you are a strong Trump supporter, then you are telling me:

1. You want to be ruled, not governed.

The single trait that predicts the Trump supporter has nothing to do with race, income, or education. A researcher at the University of Massachusetts found that the top predictor of whether a voter supported Trump is his or her proclivity towards authoritarianism.

Authoritarians obey. They rally to and follow strong leaders. And they respond aggressively to outsiders, especially when they feel threatened. From pledging to “make America great again” by building a wall on the border to promising to close mosques and ban Muslims from visiting the United States, Trump is playing directly to authoritarian inclinations.
So spare me your lectures about market freedoms or any constitutional rights you claim to hold dear. You want a dictator in the style of Putin, which pretty much makes you anti-American.

Seriously. You don’t. I’m sorry. I tried to revisit this one several times but I don’t know how to sugar-coat it.

It is NOT OKAY that Trump mocked a disabled person. If Hillary did that, it would be a deal-breaker for me. I'd go third-party, or write in my own name. I have standards. You apparently don't. Some people try to justify this by saying Trump didn't really do it. Except he really did, and it was awful.

No one even tries to defend Donald Trump mocking POWs, because he said it loud and clear: "I like people who weren't captured". It was that insult to John McCain that I thought would have killed his chances within the GOP ranks, since they claim to be pro-veteran. I grossly overestimated their character. By the time we get around to the part about Trump lusting after his own damn daughter or justifying statutory rape, I have already given up on you as a decent person.

And please. Don't tell me that you didn’t know about any of this. You know. You just don't care. Hence, my statement that you don't have class.

3. You are definitely not someone to do business with.

Yes, all politicians lie, but Trump is obscene with his falsehoods. He says whatever he feels like to whatever crowd he is speaking to, and then will deny ever saying it. I am not okay with someone who lies to me constantly. If you are, I have to wonder: would you fudge the numbers? If you caught someone on your team doing something unethical, would you be okay with that?

I already know that integrity is not high on your list. Furthermore, you clearly have no trouble with someone who has a long history of fraudulent business practices. Having a bumper sticker on your truck for any other conservative wouldn't be a problem for me—but Trump?

You might do good work, but this is a risk I would not take.

4. You are either a racist, or at best, have no problem with racism.

Trump threw out all the dog whistles and fully embraced the alt-right movement. He led the campaign to de-legitimize Obama's presidency. He constantly complains that black Americans are violent and stated that Mexican immigrants bring "crime" and are "rapists." He demanded that any judge who tries him be white! He retweets from handles like “@WhiteGenocideTM,” and goes to anti-Semitic websites for material to attack his opponents.

Your embrace of this kind of hate makes me wonder what things you say about my family behind my back. Going back to #3, if I was to hire you, you would be expected to work with people who don’t share your ethnic background or religion, and that might be a problem. Which brings me to #5.

5. You have an issue with women.

Trump has brought a level of vulgarity that we have never before seen in national politics. From his attack on Megyn Kelly, to insulting Rosie O’Donnell twice in national debates, to bragging about his genitalia on television in front of millions, to his suggestion that Hillary and Carly Fiorina are too ugly to be president. Anyone who supports a man who doesn’t think twice about calling women “pigs” or “dogs” is not someone I want to deal with.

I can say in all honesty that if it was the Democratic candidate who kept bragging about his sexual dominance and ranked all women he met by their looks, that person would not get my vote. I don’t give a damn who I think he might put on the Supreme Court. (And frankly, I wouldn’t trust him even if he claimed to share my party.) You see, I have children. I can’t very well raise them with a message of self-respect and decency if I overthrow my principles just because he decided to put a “D" after his name. Demanding that a man treat women with a basic level of respect is a pretty low bar. I have a problem with someone who can’t even meet that, along with this person’s supporters.

Update: If you have a boy or a girl, what kind of message are you sending them by making excuses for a man who brags about sexually assaulting women!

Sure, tell me you are. But if you read Scripture, it’s pretty clear on this. (Or if you can’t be bothered, there's always youtube). Trump, a man who refuses the fundamental tenet of asking God’s forgiveness, is the anti-thesis for everything Christianity is. As Christian author Philip Yancey says:

I am staggered that so many conservative or evangelical Christians would see a man who is a bully, who made his money by casinos, who has had several wives and several affairs, that they would somehow paint him as a hero, as someone that we could stand behind.
And now you find out that Trump, the top of the GOP ticket, sent you instructions at 3am to go watch a sex tape with a former Miss Universe who insulted him. And no, of course there is no sex tape. He lied about that too. (As it turns out, there was a sex tape that was uncovered, but it was a 2000 Playboy soft-core porn that starred Donald Trump!) Your candidate.

7. You don’t believe in the Constitution.

For eight years I have listened to your rabid rantings on how Obama doesn’t follow the Constitution. Yet you support a man who said the US government should shut down mosques, curb our First Amendment rights, and forego due process on people he doesn’t like. These protections are enshrined in our Bill of Rights, and you want to give them up. Trump also said he wants to end birthright citizenship, which is also in the Constitution. Maybe Mr. Khan should have made more copies for Trump’s supporters.

That’s the thing that really bothers me, though. I respect people who hold convictions, even if they are different than mine, but Trump supporters don't really believe in anything. They are authoritarian-prone sheep who will justify anything Trump says or does. Unfortunately, once you decide to sell your soul, there is no limit to how low you will go. Kimmel proved this in a bit that was both funny and horrible. He had someone ask Trump supporters on the street about the surprises on Trump's fictitious tax returns. Trump supporters vigorously defended everything they thought he did--writing off his wives as entertainment expenses, buying Putin a tiger, donating large sums of money to Jared Fogle—nothing they could come up with remotely bothered any of them.

Now, I will always be nice, but I won’t respect you. How could I? Suffice it to say, if you tell me you are in the tank for Trump, please end your conversation there. I already know everything I need to know about you.