Storms Around The World Worsen As Flooding Kills 1200 In Asia 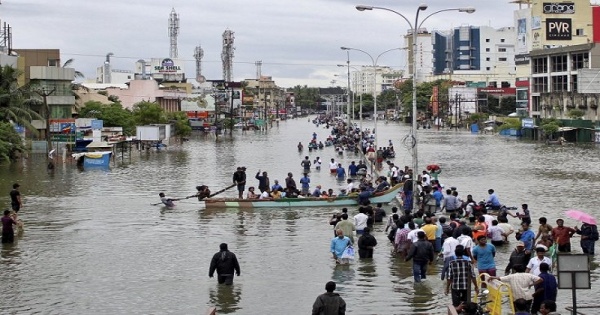 Date Posted: Wednesday, August 30th, 2017
The death toll from floods in India, Bangladesh and Nepal has climbed above 1,200, officials said on Friday (Aug 25), as rescue workers scramble to provide aid to millions of people stranded by the worst such disaster in years. All three countries suffer frequent flooding during the June to September monsoon season, but international aid agencies say things are worse this year with thousands of villages cut off and people deprived of food and clean water for days.
Government officials in India's eastern state of Bihar said at least 379 people had been killed over the past few days, with thousands sheltered in relief camps away from their inundated homes.
"This year, farming has collapsed due to floods and we will witness a sharp rise in unemployment," said Mr Anirudh Kumar, a disaster management official in Patna, the capital of poor Bihar state, which is known for the mass migration of its residents to cities in search of jobs.
In neighbouring Uttar Pradesh, at least 88 people were killed when floods swamped nearly half of the vast state of 220 million people.
Mr Rajan Kumar, a federal interior ministry official in New Delhi overseeing the rescue and relief operations, said at least 850 people had been killed in six flood-affected states in the past month.
"A second wave of floods led to widespread destruction," he said. "We will have to provide immediate rehabilitation aid to help millions affected directly."
In Nepal, 150 people have been killed and 90,000 homes destroyed in what the United Nations is calling the worst flooding there in a decade.
In Bangladesh, at least 134 people have died and more than 5.7 million been affected directly as monsoon flooding submerged more than a third of the low-lying and densely populated country.
Crops on 10,583ha have been washed away while another 600,587ha of farmland have been partially damaged, according to the Disaster Ministry, in a big blow to the farm-dependent country, which lost around 1 million tonnes of rice in flash floods in April.
"I could not find a single dry patch of land," said Mr Matthew Marek, head of disaster response in Bangladesh for the International Federation of Red Cross and Red Crescent Societies, who made an aerial assessment of the worst-affected parts of the country. "Farmers are left with nothing, not even with clean drinking water."