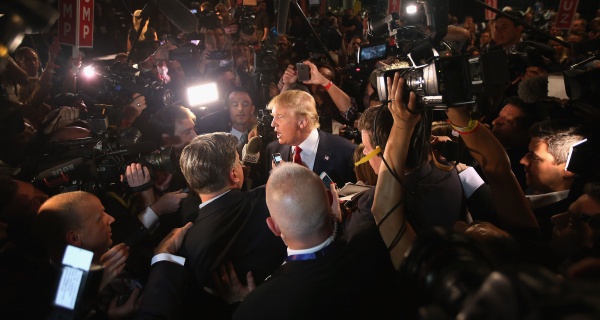 The craziest part of Donald Trump's 77-minute loon-a-thon in Phoenix earlier this week came when he rehashed his shtick about the networks turning off live coverage of his speech. Trump seemed to really believe they were shutting the cameras off because "the very dishonest media" was so terrified of his powerful words.

"They're turning those lights off so fast!" he said. "CNN doesn't want its failing viewership to see this!"

Trump is wrong about a lot of things, but it's hard to be more wrong about any one thing than he was about this particular point.

No news director would turn off the feed in the middle of a Trump-meltdown. This presidency has become the ultimate ratings bonanza. Trump couldn't do better numbers if he jumped off Mount Kilimanjaro carrying a Kardashian.

This was confirmed this week by yet another shruggingly honest TV executive – in this case Tony Maddox, head of CNN International. Maddox said CNN is doing business at "record levels." He hinted also that the monster ratings they're getting have taken the sting out of being accused of promoting fake news.

"[Trump] is good for business," Maddox said. "It's a glib thing to say. But our performance has been enhanced during this news period." Maddox, speaking at the Edinburgh TV festival, added that most of the outlets that have been singled out by Trump are doing a swimming business. "If you look at the groups that Trump has primarily targeted: CNN, The New York Times, The Washington Post, Saturday Night Live, Stephen Colbert," he said, "every single one of those has seen a quite remarkable growth in their viewing figures, in their sales figures."

Everyone hisses whenever they hear quotes like these. They recall the infamous line from last year by CBS chief Les Moonves, about how Trump "may not be good for America, but he's damn good for CBS." Moonves was even cheekier than Maddox. He laughed and added, "The money's rolling in, and this is fun. They're not even talking about issues, they're throwing bombs at each other, and I think the advertising reflects that."

For more than two years now, it's been obvious that Donald Trump is a disaster on almost every level except one – he's great for the media business. Most of us who do this work have already gone through the process of working out just how guilty we should or should not feel about this.

Many execs and editors – and Maddox seems to fall into this category – have convinced themselves that the ratings and the money are a kind of cosmic reward for covering Trump responsibly. But deep down, most of us know that's a lie. Donald Trump gets awesome ratings for the same reason Fear Factor made money feeding people rat-hair tortilla chips: nothing sells like a freak show. If a meteor crashes into jello night at the Playboy mansion, it doesn't matter if you send Edward R. Murrow to do the standup. Some things sell themselves.

The Trump presidency is like a diabolical combination of every schlock eyeball-grabbing formula the networks have ever deployed. It's Battle of the Network Stars meets Wrestlemania meets Survivor meets the Kursk disaster. It's got the immediacy of a breaking news crash, with themes of impending doom, conflict, celebrity meltdown, anger, racism, gender war, everything.

Trump even sells on the level of those Outbrain click-addicting photos of plastic surgery failures. With his mystery comb-over and his great rolls of restrained blubber and the infamous tales of violent fights with his ex over a failed scalp-reduction procedure, Trump on top of being Hitler and Hulk Hogan from a ratings perspective is also a physical monster, the world's very own bearded-lady tent.

Trump's monstrousness is ironic, since the image of Trump as the media's very own Frankenstein's monster has been used and re-used in the last years. Many in the business are of the opinion that, having created Trump and let him loose in the village, we in the press now have a responsibility to hunt him down with aggressive investigative reporting, to make the world safe again.

That might indeed be a good idea. But that take also implies that slaying the monster will fix the problem. Are we sure that's true?

Reporters seem to think so, and keep trying to find the magic formula. Just this week, staffers at the Wall Street Journal rebelled against editor-in-chief Gerard Baker. Baker, who has long been accused of being too soft on Trump, blasted his people for going too negative on the president in their coverage of the Arizona speech. He sent around a letter asking staff to "stick to reporting what [Trump] said," rather than "packaging it in exegesis and selective criticism."

Reporters fought back by (apparently) leaking the memo to the rival New York Times. This followed an incident in which a transcript of Baker's recent interview with Trump was leaked to Politico earlier this month. In it, Baker mentions being glad to have seen Ivanka Trump in Southampton, and small-talks with Trump about travel and golf. The implication here is that it's improper or unseemly for a newspaper editor to have a chummy relationship with this kind of a president.

And it is, sometimes. Reporters who should be challenging presidents and candidates are pretty much always cheating the public when they turn interviews into mutual back rub sessions.

But these intramural ethical wars within our business may just be deflections that keep us from facing bigger problems – like, for instance, the fact that we have been systematically making the entire country more stupid for decades.

We learned long ago in this business that dumber and more alarmist always beats complex and nuanced. Big headlines, cartoonish morality, scary criminals at home and foreign menaces abroad, they all sell. We decimated attention spans, rewarded hot-takers over thinkers, and created in audiences powerful addictions to conflict, vitriol, fear, self-righteousness, and race and gender resentment.

There isn't a news executive alive low enough to deny that we use xenophobia and racism to sell ads. Black people on TV for decades were almost always shirtless and chased by cops, and the "rock-throwing Arab" photo was a staple of international news sections even before 9/11. And when all else fails in the media world, just show more cleavage somewhere, and ratings go up, every time.

Donald Trump didn't just take advantage of these conditions. He was created in part by them. What's left of Trump's mind is like a parody of the average American media consumer: credulous, self-centered, manic, sex-obsessed, unfocused, and glued to stories that appeal to his sense of outrage and victimhood.

We've created a generation of people like this: anger addicts who can't read past the first page of a book. This is why the howls of outrage from within the ranks of the news media about Trump's election ring a little bit false. What the hell did we expect would happen? Who did we think would rise to prominence in our rage-filled, hyper-stimulated media environment? Sensitive geniuses?