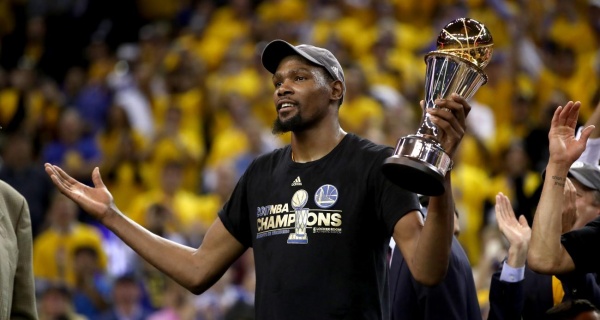 Kevin Durant may be from the Washington area, but he has no intention of visiting one of the city’s most famous landmarks anytime soon.

On Wednesday, Durant, who grew up in Seat Pleasant, Md., said he will not attend a White House reception to celebrate the Golden State Warriors’ NBA championship if President Trump invites the team.

“Nah, I won’t do that,” Durant told ESPN’s Chris Haynes on Thursday. “I don’t respect who’s in office right now.”

Speaking of Trump, Durant said, “I don’t agree with what he agrees with, so my voice is going to be heard by not doing that.”

The 2017 NBA Finals MVP added that he doesn’t suspect any members of the team will attend.

“[I]f I know my guys well enough, they’ll all agree with me,” he said, underlining that each member of the team will decide individually whether to attend.

Durant is not the first athlete to opt out of a White House visit, nor the first to specifically say Trump is the reason.

Several New England Patriots steered clear of the White House in April, when the team visited to celebrate winning Super Bowl LI. Those who skipped the visit included running back LeGarrette Blount, defensive end Chris Long, tight end Martellus Bennett and safety Devin McCourty. All said they boycotted the event because of their political differences with the president.

For Durant, it appears Trump’s recent controversial rhetoric regarding last weekend’s “Unite the Right” march, which gathered white supremacists, neo-Nazis and Ku Klux Klan members together in Charlottesville, and resulted in the death of a counterprotester, made his decision to decline the invite more clear.

“I feel ever since [Trump’s] got into office, or since he ran for the presidency, our country has been so divided, and it’s not a coincidence,” Durant said, referring to last weekend’s march, which was supposedly organized to protest the removal of a statue of Confederate Gen. Robert E. Lee.

“When [Barack] Obama was in office, things were looking up. We had so much hope in our communities where I come from because we had a black president, and that was a first,” he continued. “So to see [what happened in Charlottesville] and to be where we are now, it just felt like we took a turn for the worse, man. It all comes from who is in the administration. It comes from the top. Leadership trickles down to the rest of us. So, you know, if we have someone in office that doesn’t care about all people, then we won’t go anywhere as a country. In my opinion, until we get him out of here, we won’t see any progress.”

Durant is the latest athlete to speak out this week.

On Thursday, Durant commended James for being one of the more outspoken athletes about Trump and racism in America, and noted the world may soon be hearing more of his own opinions on social issues, as well.

“A lot [of] guys with platforms have drove the conversation in a good direction. And what’s going on in Charlottesville, that was unfathomable,” Durant told ESPN.

“For us to move forward, we need more athletes and people of power and influence to come out and speak,” Durant continued. “It’s great to see a lot of athletes coming together and trying to direct a positive path for a lot of kids and a lot of people in this country who look up to us.