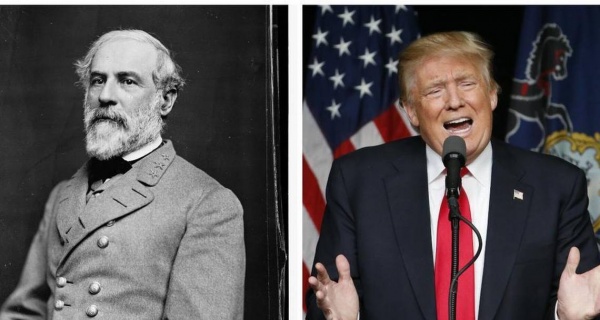 In a series of Tweets, the idiot-in-chief continued the process of unveiling his true colors as a white nationalist that he started in the wake of the tragic events that took place this weekend around the removal of a statue commemorating Robert E. Lee. Trump opined in the Tweets that it is "Sad to see the history and culture of our great country being ripped apart by the removal of our beautiful statues and monuments". In another Tweet he added, "So foolish."

"So misguided" General Lee might have tweeted if he was alive today. Following the end of the Civil War he objected to raising monuments to the Confederacy writing that it would be wiser "not to keep open the sores of war but to follow the examples of those nations who endeavored to obliterate the marks of civil strife." Why then does Trump continue to double down in his defense of maintaining these s"sores of war"? We think we know.

It is not surprising that in venerating the commanding general of the Confederacy that Trump would be willing to overlook Lee's slave ownership. After all, Trump's father was arrested for participating in a KKK rally the in New York in 1927 (see "1927 News Report: Donald Trump's Dad Arrested In KKK Brawl With Cop's" in the News section) . While it is not right to visit the sins of the father against the son, Trump has made it clear that the apple didn't fall far from the tree when Fred gave birth to Donald.

Although Trump may not care, Mr. Lee was a particularly pernicious slave owner.  Historical documents show that Lee was a cruel figure, encouraging his overseers to severely beat slaves captured after trying to escape. One slave said Lee was one of the meanest men she had ever met.

Lee wrote in a letter to his wife about their slaves that "The painful discipline they are undergoing is necessary for their instruction as a race". In this short sentence, Lee was laying out a creed asserting the inferiority of blacks for white supremacists to follow from then till now.

While it is not surprising that Trump is not interested in Lee's treatment of slaves, we would not have thought that someone who is so concerned with winning and making America great again would stand up to defend the honor of a general with a losing battlefield record and who was guilty of treason.

Lee lost the bloodiest battle in our nation's history at Gettysburg by employing a dubious military strategy that resulted in the loss of the Civil War for the South. Historians say Lee's massed infantry assault across a wide plain was a gross miscalculation. Under his leadership more than 50,000 Confederate soldiers went to their deaths.

Trump famously said about John McCain's prisoner of war status, "I like people who weren't captured". You would think Trump would apply this logic to Lee and declare, "I like generals who win".

How does the man who has declared his intent to Make America Great Again argue against removing statues that celebrate a man who was leading an army that was trying to destroy this already great country?

Lee was offered the opportunity by Lincoln to lead the Union forces, but made the conscious decision to lead the enemy in a war against the United States. The New York Times wrote in in 1865, "He has levied war against the United States more strenuously than any other man in the land". His citizenship was revoked and at the end of the war he was indicted for treason.

Can you imagine a statute of the Emperor of Japan, the leader of the only other nation to attack the United States on its own shores, being erected anywhere within the confines of the fifty states? No! Can you imagine Trump tweeting how "sad" or "foolish" it would be to remove such a monument? NO!

Why, then, is the idiot-in-chief bent on honoring this slave owning, war losing traitor to Amercia? Could it be because Trump's sympathy for Lee's core belief in white supremacy outweighs his distaste for losers and traitors?