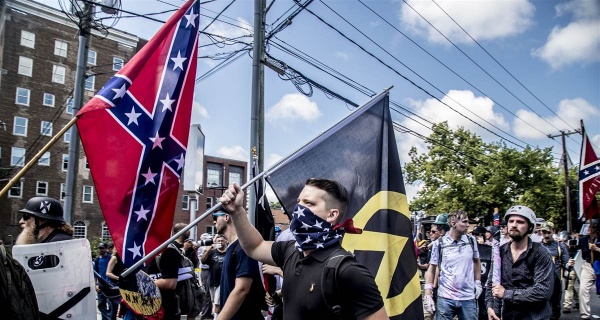 A leader in the white nationalist movement said he remains emboldened and warned, "We will be back Charlottesville," days after groups espousing racist ideologies rampaged through the city.

Matthew Heimbach, chairman of the Traditionalist Worker Party, said Wednesday that members are upset by the way state and local government "restricted our constitutional rights" during a rally Saturday when white nationalists clashed with activists protesting racism.

"They are the ones that lead to the violence because they did not do their job to ensure that not only us, but also the opposition, could have their constitutionally protected freedom of speech," Heimbach said, adding, "We will be back Charlottesville, and we will be back with more men. More women."

His unbending position is in direct defiance to the wave of politicians and civil rights groups who have condemned the hateful rhetoric used by neo-Nazis and white supremacists who were in Charlottesville, where marchers carried Confederate and swastika-emblazoned flags and shouted racial and anti-Semitic epithets.

But even as Charlottesville looks to heal its divisions — with hundreds of people gathering Wednesday night at the University of Virginia with a message of peace — Heimbach said he's ready for the next potential flashpoint: Lexington, Kentucky.

The Lexington-Fayette Urban County Council will vote Thursday on Mayor Jim Gray's proposal to relocate two Confederate-era statues from the front of the former Fayette County Courthouse to Veterans Park, which is owned by the city. The Kentucky Military Heritage Commission must ultimately approve the move.

Heimbach said his Traditionalist Worker Party — which the Southern Poverty Law Center brands as a white nationalist group advocating for "racially pure nations and communities" — is building a "grassroots" base that plans to eventually rally in Lexington against city leaders' efforts.

"They will not replace us. They will not take down our statues. For every statue they tear down, we will put another one up," he added.

The Lexington NAACP chapter said in response to reports that white nationalists plan to rally in the city that "we have only one message: Lexington is a welcoming, inclusive and compassionate city and you are not welcome here."

Senate Majority Leader, Mitch McConnell, R-Ky., said white supremacists, the KKK and neo-Nazis groups "are not welcome in Kentucky and should not be welcomed anywhere in America."

Berkeley Mayor Jesse Arreguin said this week that the city has been inundated with calls against any such demonstration.

"We want to reiterate that the city has not approved this gathering," Arreguin said in a blog post. "It is an event organized online. No one has tried to obtain a permit nor has one been granted."

Christopher Cantwell, a white nationalist who spoke at Charlottesville's "Unite the Right" rally, said he wants supporters to lay low for now to "de-escalate" the tension — coming after city officials announced plans to take down a statue of Confederate Gen. Robert E. Lee.

"Right now things are too hot. It's looking bad for a lot of things and we need to calm down," said Cantwell, a self-described "shock jock" also featured in a Vice News report about the rally.

He denied, however, that President Donald Trump is at all associated with the white nationalist movement, although its supporters and other white supremacists have praised the president after he doubled-down on blaming "both sides" for the violence in Charlottesville that led to one counter-protester's death.

Trump's assertion Tuesday that the "alt-left" was just as much to blame for the brawling triggered outrage from both Democrats and Republicans who say he has failed to adequately denounce white supremacist ideology and call the incident "domestic terrorism." The president ended up dissolving two of his economic advisory councils Wednesday after a spate of business leaders dropped out in protest.

But former Ku Klux Klan leader David Duke tweeted after Trump's news conference to thank him for "your honesty & courage to tell the truth about Charlottesville & condemn the leftist terrorists."

Ultimately, white nationalists such as Heimbach and Cantwell said they will continue to organize to get their message across that white Americans are undergoing a "genocide" in the United States. They point to Census and demographic data that indicates non-Hispanic whites were the minority of births for the first time in 2012 and that minority groups will outnumber white Americans by 2050.

Heimbach added that he wants his group — what he calls "community organizers" — to address another pressing societal problem: the opioid epidemic, which Trump last week declared a national "emergency" and the Centers for Disease Control and Prevention say heavily hits rural, majority-white counties.

"We as whites in America deserve our own nation, our own home for our own culture, our faith, our family and our folk," Heimbach said.