The KKK Is Currently Active In 22 States Throughout America 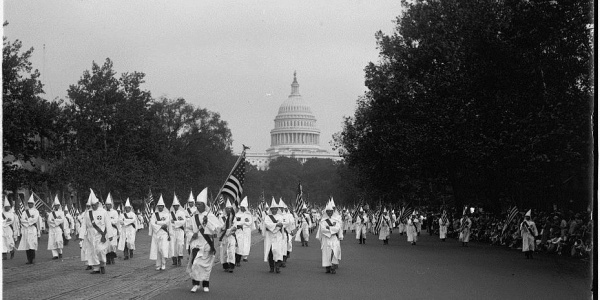 The organized Ku Klux Klan movement saw a boost in its membership in 2017.

In fact more than half of today's Klans formed in the last three years.

Some 42 different Klan groups were active in 22 states as of June 2017, a slight increase from early 2016, according to a report from the Anti-Defamation League, a nonpartisan civil rights advocacy group. The Klan, known for promoting white supremacist and white nationalist ideas, has captured recent public attention amid fallout from a weekend marked by race-fueled clashes.

President Donald Trump mentioned the movement by name on Aug. 14 during a speech from the White House in response to the violent white nationalist rally in Charlottesville, Virginia, to protest the removal of a statue of Confederate Gen. Robert E. Lee. The rally resulted in clashes with counterdemonstrators that left one woman dead and more than a dozen injured.

"Racism is evil, and those who cause violence in its name are criminals and thugs, including the KKK, neo-Nazis, white supremacists and other hate groups that are repugnant to everything we hold dear as Americans," Trump said.

The president's comments followed mounting criticism of what many considered a weak initial response to the weekend violence, and several politicians called on Trump to explicitly name the KKK and other white nationalist groups. Current KKK groups have continued to be linked to criminal activity and violence reminiscent of the earliest waves of the Klan.

In addition to the more than 40 identified Klan groups, the ADL tracked Klan activity to 11 other states during that same time, including some states perceived to be more liberal, like California. The ADL tracked the movement from January 2016 to June 2017.

Nationwide, there are still an estimated 3,000 Klan members and unaffiliated people who "identify with Klan ideology," according to the ADL. Membership, though, remains spread across dozens of groups. The largest Klans reportedly don't have more than 50 to 100 active members, and most have fewer than 25.

Keeping with historical trends, the ADL noted the groups and activity are largely concentrated in the southern and eastern parts of the nation. Mississippi was found to house the most with five groups, followed by Alabama with four.

The group over time has proved outspoken on a number of issues, pushing anti-immigration and anti-antisemitic views and advocating for "purification" of American society. Most recently, the Klan has denounced other activist social movements, such as Black Lives Matter.

The viewpoints are often publicly permitted under free speech protections.

Among its recent activity, the KKK movement has included small rallies and protests in parks, at courthouses and during LGBT pride marches. In some cases, groups have joined forces to bolster numbers at different events.

[MORE: Ronald Reagan, George W. Bush and Bob Dole Spoke Out Against Racism in the Past]

Still, some groups have promised marches that haven't materialized, and the organized movement has rarely proven stable, according to the ADL.

"The organized Ku Klux Klan movement continues to struggle due to several factors, including infighting, the perception among adherents that current Klan groups (or their leaders) are not authentic, as well as competition for membership from other white supremacist movements," the ADL notes. "These include the surging 'Alternative right' and a rising number of white supremacist prison gangs."

Here's a look at the states that have housed KKK groups, based on a June 2017 analysis from the Anti-Defamation League. The number indicates the amout of known groups: