Under Siege: The Brutal Week Of Lies, Deception And Dysfunction 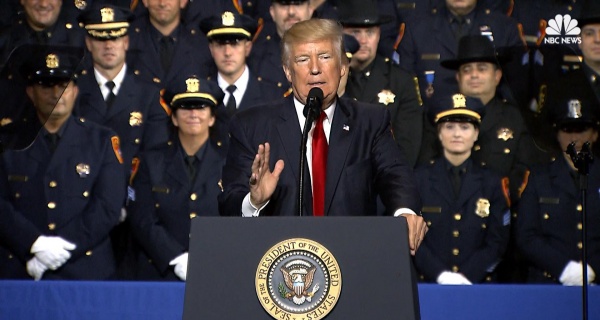 Date Posted: Sunday, August 6th, 2017
Donald Trump's in front of law enforcement officials last Friday was littered with dubious claims. That's no surprise. Just this week, the president lied about consulting with generals before he Twitter-issued a ban on transgender troops, about the Mexican president calling him to say he was doing a great job on immigration, and he's still lying about the Boy Scouts.
Outside of Trump ignoring political protocol again, the last two are petty, even superficial falsehoods. Things that make it appear Trump is likable, stroking his inflated ego. But last week's claim that police officers are not protected by the law is dangerous rhetoric that can further endanger those who stand to be affected by state violence — Black people.
An egregiously false statement, Trump insisted that the legal system was stacked against police officers. “For years and years, [laws have] been made to protect the criminal...These laws are stacked against you. We’re changing those laws.”
Please be specific Mr. President — which laws specifically are stacked against police officers? Due process? The right to a trial? The examples of police misconduct in the past few weeks and literally countless others, have shown that police officers often escape the justice promised by the legal system.
What changes does the president plan on making to our legal system to further protect officers while violating the rights of American citizens?
We can look to embattled Attorney General Jeff Sessions for a hint at the kind of changes Trump would like to make. Since being confirmed, Sessions recommitted to the criminalization of and stigmatization of marijuana, reinstated the use of privately owned prisons, and put a pause on police oversight and reform while removing restrictions on questionable police seizures. All of these actions point to an increase in unchecked police brutality and a decrease in the rights promised to us by the 8th Amendment of the Constitution which states that “excessive bail shall not be required, nor excessive fines imposed, nor cruel and unusual punishments inflicted."
Trump will continue to lie. And we must not be desensitized to his rhetoric. For many of us, calling him out on these falsehoods and holding him accountable is an important matter.
A matter of life or death.