GOP Senator Urges Party To Speak Out Against Trump 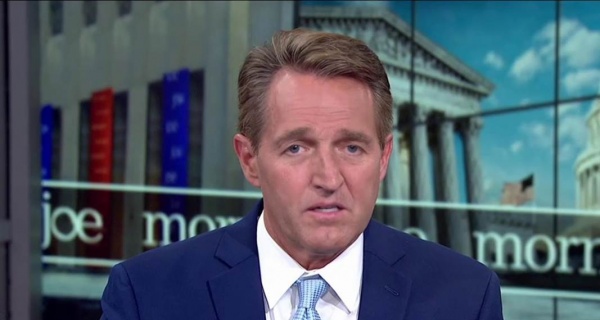 Who could blame the people who felt abandoned and ignored by the major parties for reaching in despair for a candidate who offered oversimplified answers to infinitely complex questions and managed to entertain them in the process? With hindsight, it is clear that we all but ensured the rise of Donald Trump.

I will let the liberals answer for their own sins in this regard. (There are many.) But we conservatives mocked Barack Obama’s failure to deliver on his pledge to change the tone in Washington even as we worked to assist with that failure. It was we conservatives who, upon Obama’s election, stated that our No. 1 priority was not advancing a conservative policy agenda but making Obama a one-term president—the corollary to this binary thinking being that his failure would be our success and the fortunes of the citizenry would presumably be sorted out in the meantime. It was we conservatives who were largely silent when the most egregious and sustained attacks on Obama’s legitimacy were leveled by marginal figures who would later be embraced and legitimized by far too many of us. It was we conservatives who rightly and robustly asserted our constitutional prerogatives as a co-equal branch of government when a Democrat was in the White House but who, despite solemn vows to do the same in the event of a Trump presidency, have maintained an unnerving silence as instability has ensued. To carry on in the spring of 2017 as if what was happening was anything approaching normalcy required a determined suspension of critical faculties. And tremendous powers of denial.

I’ve been sympathetic to this impulse to denial, as one doesn’t ever want to believe that the government of the United States has been made dysfunctional at the highest levels, especially by the actions of one’s own party. Michael Gerson, a con­servative columnist and former senior adviser to President George W. Bush, wrote, four months into the new presidency, “The conservative mind, in some very visible cases, has become diseased,” and conservative institutions “with the blessings of a president … have abandoned the normal constraints of reason and compassion.”

For a conservative, that’s an awfully bitter pill to swallow. So as I layered in my defense mechanisms, I even found myself saying things like, “If I took the time to respond to every presiden­tial tweet, there would be little time for anything else.” Given the volume and velocity of tweets from both the Trump campaign and then the White House, this was certainly true. But it was also a monumental dodge. It would be like Noah saying, “If I spent all my time obsessing about the coming flood, there would be little time for anything else.” At a certain point, if one is being honest, the flood becomes the thing that is most worthy of attention. At a certain point, it might be time to build an ark.

Under our Constitution, there simply are not that many people who are in a position to do something about an executive branch in chaos. As the first branch of government (Article I), the Congress was designed expressly to assert itself at just such moments. It is what we talk about when we talk about “checks and balances.” Too often, we observe the unfolding drama along with the rest of the country, passively, all but saying, “Someone should do something!” without seeming to realize that that someone is us. And so, that unnerving silence in the face of an erratic executive branch is an abdication, and those in positions of leadership bear particular responsibility.

By signing up you agree to receive email newsletters or alerts from POLITICO. You can unsubscribe at any time.
There was a time when the leadership of the Congress from both parties felt an institutional loyalty that would frequently create bonds across party lines in defense of congressional prerogatives in a unified front against the White House, regardless of the president’s party. We do not have to go very far back to identify these exemplars—the Bob Doles and Howard Bakers and Richard Lugars of the Senate. Vigorous partisans, yes, but even more important, principled constitutional conservatives whose primary interest was in governing and making America truly great.

But then the period of collapse and dysfunction set in, amplified by the internet and our growing sense of alienation from each other, and we lost our way and began to rationalize away our principles in the process. But where does such capitulation take us? If by 2017 the conservative bargain was to go along for the very bumpy ride because with congressional hegemony and the White House we had the numbers to achieve some long-held policy goals—even as we put at risk our institutions and our values—then it was a very real question whether any such policy victories wouldn’t be Pyrrhic ones. If this was our Faustian bargain, then it was not worth it. If ultimately our principles were so malleable as to no longer be principles, then what was the point of political victories in the first place?

Meanwhile, the strange specter of an American president’s seeming affection for strongmen and authoritarians created such a cognitive dissonance among my generation of conservatives—who had come of age under existential threat from the Soviet Union—that it was almost impossible to believe. Even as our own government was documenting a con­certed attack against our democratic processes by an enemy foreign power, our own White House was rejecting the authority of its own intelligence agencies, disclaiming their findings as a Democratic ruse and a hoax. Conduct that would have had conservatives up in arms had it been exhibited by our political opponents now had us dumbstruck.

It was then that I was compelled back to Senator Goldwater’s book, to a chapter entitled “The Soviet Menace.” Since the fall of the Berlin Wall, this part of Goldwater’s critique had seemed particularly anachronistic. The lesson here is that nothing is gone forever, especially when it comes to the devouring ambition of despotic men. As Goldwater wrote in that chapter:

Our forebears knew that “keeping a Republic” meant, above all, keeping it safe from foreign transgressors; they knew that a people cannot live and work freely, and develop national institutions conducive to freedom, except in peace and with independence.

So, where should Republicans go from here? First, we shouldn’t hesitate to speak out if the president “plays to the base” in ways that damage the Republican Party’s ability to grow and speak to a larger audience. Second, Republicans need to take the long view when it comes to issues like free trade: Populist and protectionist policies might play well in the short term, but they handicap the country in the long term. Third, Republicans need to stand up for institutions and prerogatives, like the Senate filibuster, that have served us well for more than two centuries.

We have taken our “institutions conducive to freedom,” as Goldwater put it, for granted as we have engaged in one of the more reckless periods of politics in our history. In 2017, we seem to have lost our appreciation for just how hard won and vulnerable those institutions are.