Heroin-Assisted Treatment Works, But The U.S. Prohibits It 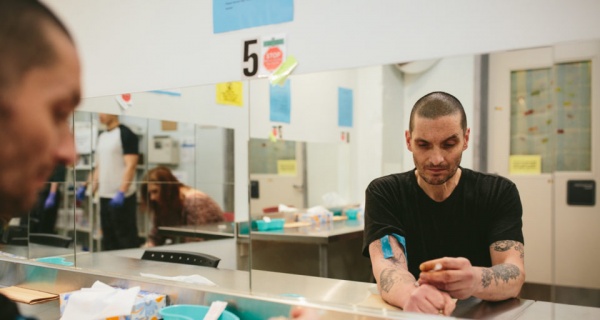 The opioid epidemic has gripped the United States, worsening day by day. Overdose deaths caused by opioids nearly tripled in a 15-year period. According to the U.S. Centers for Disease Control and Prevention, opioids, including heroin, accounted for about 63 percent of fatal overdoses in 2015.

But in a recent article for the Houston Chronicle, drug policy expert Katharine Neill Harris argues for bringing heroin-assisted treatment to the United States. Germany, Belgium, Denmark, the Netherlands and the United Kingdom have all launched heroin-assisted treatment programs, commonly referred to as HAT, that have shown to have a significant impact on reducing opioid use and overdoses, as well as related diseases such as HIV and hepatitis C.

"For certain people, heroin is preferable," Neill Harris tells Rolling Stone. "It could help them stay in treatment for longer."

What is heroin-assisted treatment and how does it help fight opioid addiction? Here is everything you need to know about the controversial treatment.

How does heroin-assisted treatment work?
People who are addicted to opioids can visit a specialized clinic, where they would get pharmaceutical-grade heroin – referred to as either diacetylmorphine or diamorphine – up to three doses a day, in most cases. A person in an HAT program would use medically-prescribed heroin on site, under careful supervision of a health care professional who would watch out for side effects. But it's not a standalone therapy; HAT is often given in conjunction with psychotherapy and other social services. All together, this reduces the risk of overdose, as well as the demand for street heroin and criminal activity associated with scoring drugs, says Neill Harris, a drug policy fellow at Rice University's Baker Institute for Public Policy.

Researchers also found that, although both methods led to improved mental and physical health outcomes, the results of HAT were more pronounced — findings replicated in a 2011 German study. A 2010 randomized trial and a 2015 meta-analysis also confirmed that illicit drug use was greatly reduced among people in heroin-assisted treatment as compared to those taking methadone. "There's also evidence that heroin is associated with a greater reduced involvement in criminal activity and also a lower risk of incarceration," Neill Harris says.

That's because people who don't respond to other treatments require very high doses of heroin, says NIDA Director Dr. Nora D. Volkow, an expert on medication-assisted treatment. "By providing that heroin at very specific times, at very specific doses to try to sustain that stability," Volkow tells Rolling Stone, "these programs are helping them not to crave and not to go into withdrawal."

Most heroin-assisted treatment programs follow the same basic tenets: Current heroin users who enroll must do so of their own free will, must have tried multiple other treatments without success and must be legal adults. But HAT also has a "tremendous" disadvantage, Volkow notes: High doses of heroin carry a greater risk of overdose, which requires doctors to monitor use "very very closely," she says.

If there's evidence that these treatment options could be helpful, why aren't they being considered in the U.S.?
Heroin is illegal in the United States, except when used for research purposes, so it would be hard to develop a heroin-assisted treatment without jumping through political and cultural hoops. Still, the country does have a way to make pharmaceutical-grade heroin available for scientific studies that are federally sanctioned. To this end, Neill Harris suggests launching a pilot program that would study the safety and the efficacy of the program and its impact on the U.S. opioid epidemic.

Overcoming the taboo of using heroin for treatment will be difficult, though. After all, medication-assisted treatment — a legal and accessible therapy in the United States — is still considered controversial, despite research proving its effectiveness time and time again. For example, a 14-year study out of Baltimore found that deaths from heroin overdose fell dramatically as MAT became more widely available in the city — from a record 312 deaths in 1999 to 106 deaths in 2008. In 2000, the University of California at San Francisco released a study that showed methadone-based therapy decreased illicit heroin use and kept people in treatment more so than drug-free detox programs; similar findings came out of a U.K. analysis in 2009.

"The data is clear," Volkow tells Rolling Stone. "Medication-assisted therapy is very effective – much more effective than any other treatment."

Still, misconceptions prevail, says Tom Hill, vice president of Addiction and Recovery at the National Council for Behavioral Health. One pervasive myth is that, with MAT, you're only substituting one opioid for another. Tom Price, secretary of the U.S. Department of Health and Human Services (HHS), parroted this disinformation in May, at a drug overdose crisis event in May. When asked about his view on drug treatment, Price said medication-assisted treatment is "not moving the dial much;" rather, he added, "folks need to be cured." (STAT reported that an HHS spokesperson later back-pedaled on Price's comment.)

But that's not how opioid addiction treatment works, Hill says. Taking these pharmaceutical-grade drugs in a safe environment helps reduce relapse by meeting cravings and staving off withdrawal symptoms. "Lots of people have been using methadone for years and years [and] live full, functioning normal lives," he tells Rolling Stone.

So what needs to change?
Experts believe there needs to be a shift in how we think about addiction and recovery.

Think of addiction in terms of diabetes or heart disease, Hill offers. You wouldn't expect a diabetic person to treat their disease by only eliminating sugary foods from their diet. Instead, Hill says, it's widely accepted that someone living with diabetes would also need prescription drugs to manage their condition. "We wouldn't ask those people with those chronic conditions to get off their medication," he says.

But society treats addiction as a moral failing, rather than a chronic disease with a relapsing nature, Neill Harris says. Such as view, then, frames abstinence as the only acceptable form of recovery. But, Neill Harris counters, abstaining from drugs doesn't work for everyone dealing with substance abuse. So a drug-free detox program may not have a positive effect.

"Abstinence is a great goal, but it's not a realistic goal for everybody," Neill Harris tells Rolling Stone. "That's something we have to come to grips with as a country."