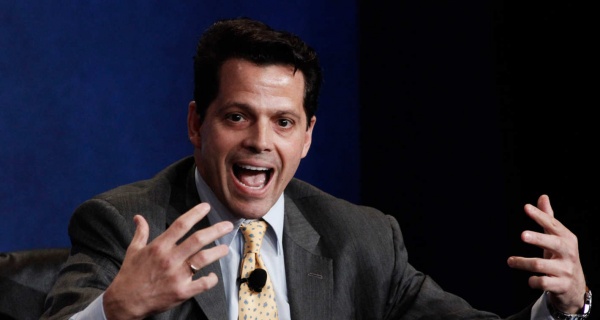 I already miss Anthony Scaramucci. Of course, he hasn't officially been fired yet (checks Twitter), or committed suicide by jumping into boiling steak fat at his Gotti-esque Hunt and Fish Club restaurant in Manhattan (checks Twitter again). But it sure seems like he's not long for this earth. Even by Trumpian standards, has any federal official had a more disastrous rollout?

The big headline this morning is that the new White House Communications Director got upset and decided to call Ryan Lizza at the New Yorker and go full-on Glengarry Glen Ross without asking for background or off-the-record privileges.

In the call, Scaramucci hounded Lizza to give up his sources, threatened to fire the entire White House communications staff, and gave what Saddam Hussein would have described as the mother of all quotes in an effort to bash fellow backstabbing Trump insider Steve Bannon:

Bannon declined to comment on Scaramucci's charge that he s**** his own c***.

It's hard to believe that it was barely a week ago, on July 21st, that Scaramucci was given Trump's top press job. It feels like it was millions of years in the past, back when Africa was still connected to Brazil, and Sean Spicer was still our idea of a national embarrassment. This is the way time works in the Trump era. Days seem like centuries, and weeks seem like millennia.

In that short period of time, Scaramucci has already accomplished a lot:

He began by announcing cheerfully that he wanted a "fresh start" with the media, pledged an "era of new good feeling," and promised to "create a positive mojo." As he was doing this, the press was seizing on the fact that he was deleting old tweets that supported gun control, called climate science "irrefutable," and described Trump as an "odd guy… smart with no judgment." One tweet even committed ultimate Trump-heresy by saying of Hillary Clinton, "She is incredibly competent." Even if the media had wanted to give the guy a break, he all but forced them to beat him like a mule minutes into his appointment.

While speaking of fellow White House spokesperson and new department subordinate Sarah Huckabee Sanders, “Mooch” delivered a line that read like a Mad Men screen test: "Sarah, if you're watching, I loved the hair and makeup person that we had on Friday." By the next day he was like a man with a sackful of ants turned over on his head, so many were the news stories denouncing him as sexist.

He got caught talking out of school in between TV segments: "In the back of my mind I have to call on CNN and send a message to [CNN President Jeff] Zucker that we are back in business." He added that Zucker wasn't "getting a placement fee," but had "helped me get the job by hitting those guys," referring to three CNN reporters who had to resign over a botched report claiming Scaramucci had inappropriate contact with Russians.

He appeared to confirm a Washington Post report his boss Donald Trump had called "fake news." Trump lawyer Jay Sekulow had told ABC that "pardons are not being discussed and are not on the table," but Scaramucci told Fox News Sunday that, hell yes, he'd discussed pardons with the chief: "I'm in the Oval Office with the president last week, we're talking about that," he said. "He brought that up, he said but he doesn't have to be pardoned there's nobody around him that has to be pardoned he was just making the statement about the power of pardon."

In the space of a week, Trump's new press expert demonstrated that he a) didn't know how to hold off-the-record conversations b) didn't understand that cameras and microphones keep rolling even when the red light is off and c) doesn't bother to check the other public statements made by administration officials before he makes statements of his own. An alien crashed on earth and given a two-minute tutorial on dealing with reporters would have done a better job.

On the other hand, it sort of worked! The least successful Trump administration officials to date have been the ones who have labored in public to act like real presidential aides. Scaramucci on the other hand is like Trump himself: ridiculous, ham-brained, unapologetic, disdainful of Washington pieties, and bursting with reasonless confidence.

His hire horrified even hardened mutants like Bannon ("Over my dead body will you get this job!" Bannon is reported to have yelped, when he heard the Scaramucci news). Spicer, who for months had effortlessly gulped down Trump administration lies like a vulture guzzling battery acid, resigned in protest at Scaramucci's arrival (an "unusual choice of hills to die on" was the New Yorker's comment).

Priebus, who kept his nerve even as the loathsome Bannon groped his inner knee in public, reportedly flipped his lid at the news "Mooch" had been hired.

The conventional explanation for all of this outrage was that Beltway hacks were revolting against the arrival of a condescending Wall Street operator. As Scaramucci explained to New York magazine reporter Jessica Pressler in January:

"And the other thing I have learned about these people in Washington ... is they have no money. So what happens when they have no f****** money is they fight about what seat they are in and what the title is. F****** congressmen act like that. They are f****** jackasses."

A hilarious and true observation! Mencken himself would have approved of Scaramucci's take on Washington's jobholder class. Of course, the rest of that article included Scaramucci laying a Seventies come-on on Pressler at his garish Hunt and Fish club restaurant:

"How old are you?" he asked. "You look good. No lines on your face. What are you, a Sagittarius?"

Scaramucci is a hedge funder – a fund-of-funds guy to be exact, who charges modestly massive fees to funnel your money to other hedge-funders who do the actual thinking.

He is said to be good at his job, in a field that is mostly about mesmerizing high net worth individuals with cannon-bursts of shmaltzy bullshit just long enough to get them to write huge checks. He is a yammerer and a glad-hander and apparently also a guy who genuinely likes talking to reporters, or at least he did before he got this job.

He supposedly got the White House post for the most important reason that exists in the Trump administration: the president likes the way he looks on TV. This was as opposed to 45's take on Sean Spicer's famously ill-fitting attire: "Doesn't the guy own a dark suit?"

Making Scaramucci Communications Director because he dresses like the owner of a Lamborghini dealership fit like a glove with the Trump ethos. After spending his early presidency stuck with a standard-issue Beltway prevaricator as his chief public spokesperson (Spicer was just a year removed from denouncing Trump on behalf of the RNC for his remarks about John McCain), Trump was getting back to his roots.

The Communications Director job in the Trump administration is a no-win job, because the real Communications Director is Trump's Twitter feed. The job that Scaramucci technically occupies is a thankless and redundant position that involves standing before reporters and reconciling avalanches of already-circulated lies, contradictions, and insulting/ignorant statements.

Even a genius of the highest order couldn't make this work. Of course, Trump hasn't had geniuses available to him. The fourth-rate minds he has instead had in his employ just started raging trash-fires whenever they tried to logically explain Trump's utterances.

They gave us statements like Kellyanne Conway's "alternative facts," or Katrina Pierson's bit about how Trump wasn't changing his position on immigration, but rather "changing the words that he is saying."

An actual smart person given this job wouldn't bother with any of this. He or she would simply take the podium each day and say, "What can I say? The president said that shit." Then just no-comment everything but schedules and staff announcements. Over time, reporters might actually respect the work. Probably not, but maybe.

Scaramucci represents a third strategy, one that's similar to Trump's own campaign tactics. That is, don't ever react to the news or attempt to explain it, but continually stay ahead of it by making new news of your own.

There are thousands of reporters in America, and if Scaramucci has the stomach for it, he should call a new one every night and just rant his brains out. It might not save America from being the laughingstock of the planet – that ship has sailed for us – but at least it will be entertaining. At this point in our relationship with the Trump administration, we have to take what little enjoyments we can. And remember, the next press chief could be Alex Jones.