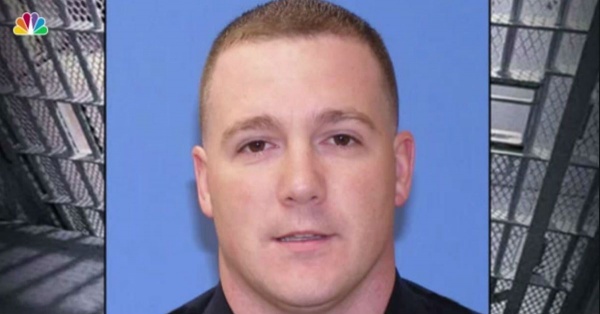 A Suffolk County officer forced a woman wanted for traffic violations to perform a sex act in a secluded room of a Long Island police precinct, prosecutors said Thursday.

Officer Christopher McCoy, 38, was arrested on federal charges for the March incident in a Wyandanch station house that’s also the subject of a $40 million lawsuit.

While processing the woman wanted for outstanding traffic and vehicle offenses, the Sayville cop brought her to an isolated room and exposed himself, Brooklyn federal prosecutors said. When she refused the proposition, McCoy held her head down, court filings show.

At one point, someone walked by the door and McCoy "quickly zipped up his pants and took her out of the room."

In the course of the act, semen fell on the victim's shirt, court papers state.

More than a week later, McCoy texted the victim — who at first couldn't figure out who was contacting her.

At first, he denied sexual contact. When the feds said they were prepared to take a DNA sample to compare it to the semen, McCoy admitted there had been sexual contact, prosecutors said.

McCoy is scheduled to be arraigned in Central Islip federal court Thursday afternoon. The woman had previously filed a $40 million lawsuit against Suffolk County and McCoy.

FBI officials are asking anyone else to contact them if they believe McCoy victimized them.

The officer faces up to 10 years if convicted on charges he deprived the woman of her civil rights. McCoy has been suspended without pay since the police department received the complaint, according to Suffolk County Assistant Police Commissioner Justin Meyers.

"Law enforcement officials are duty-bound to uphold the Constitution and protect all of our citizens, and certainly not to abuse them. No dereliction of this duty will be tolerated," Brooklyn U.S. Attorney Bridget Rohde said.

McCoy's lawyer could not be immediately reached for comment.