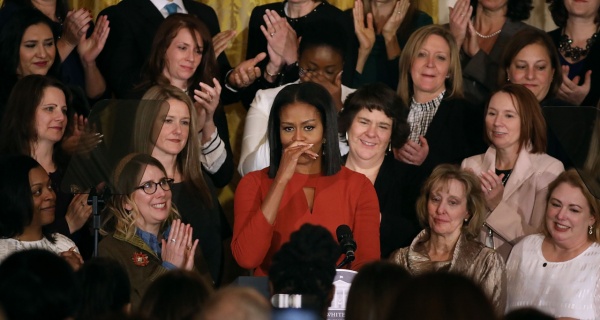 In her first public appearance in Colorado since leaving the White House, former first lady Michelle Obama had a message for women: Seize your power and don’t let go.

Sitting for an armchair conversation in front of 8,500 people, Obama was relaxed, personable and playful but still serious as she talked on a range of topics around education for girls, health and nutrition and female empowerment — all things she worked on as first lady — at the Women’s Foundation of Colorado’s 30th anniversary Tuesday night at the Pepsi Center.

The crowd was a mix of young and old and predominately women. The event’s popularity forced organizers to open up more seats. Obama was greeted by an extended standing ovation and a few calls of “we love you.”

WFCO President and CEO Lauren Casteel commented that Obama broke a glass ceiling by becoming the first black first lady. She then asked which of the falling glass shards cut the deepest.

“The shards that cut me the deepest were the ones that intended to cut,” she said, referencing being called an ape and people talking about her bottom. “Knowing that after eight years of working really hard for this country, there are still people who won’t see me for what I am because of my skin color.”

She said she can’t pretend like it doesn’t hurt because that lets those who do the hurting off the hook.

“Women, we endure those cuts in so many ways that we don’t even notice we’re cut,” she said. “We are living with small tiny cuts, and we are bleeding every single day. And we’re still getting up.”

But Obama said women should own their scars. Referring to failure, she said those wounds hurt deeply but they heal with time. If women own their scars, they can encourage younger girls who are getting their first cuts.

Although Obama largely stayed away from politics, she took a few thinly veiled shots at the current president — receiving cheers from the crowd. She reiterated that she would not be seeking public office, much to the crowd’s verbal dismay. But she said she and Barack Obama intend to stay in public service.

She warned people against the notion that the nation is falling apart. Instead she said it’s a young country that will learn from its mistakes and successes.

“The people in this country are universally good and kind and honest and decent,” she said. “Don’t be afraid of the country you live in. The folks here are good.”

Instead of waiting on national policies, she said women need to take charge every day in their own lives and their community. And for the men in attendance, she said it’s important for them to be in girls’ lives, valuing their thoughts and voices.

She criticized a one-size-fits-all education system that values speed of learning, pushing out women who learn differently than men from STEM fields.

Michelle and Barack Obama have been on speaking tours after a post-presidency vacation. Similar to Tuesday’s conversation, Michelle Obama has largely steered clear of politics, focusing instead on topics that she advocated for as first lady, including education for women and health and nutrition for schoolchildren.

She spoke at the American Institute of Architecture’s annual conference in April, The Partnership for a Healthier America summit in May and the Pennsylvania Conference for Women in October.

The WFCO event served as a fundraiser for the organization. Among the speakers were Lt. Gov. Donna Lynne, former first lady of Colorado and WFCO co-founder Dottie Lamm and Denver Mayor Michael Hancock.

WFCO was founded in 1987 to address the “feminization of poverty” as Colorado and areas across the world saw women more likely to live in poverty.