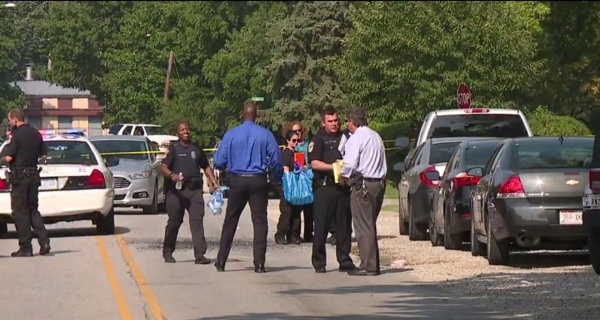 Police say three people were shot at a northeast side cemetery Thursday during a funeral procession for a recent murder victim.

Police responded to the 4000 block of Millersville Road around 4 p.m. Thursday after at least 20 shots were fired.

The shooting happened during the procession for Jasmine Moore, 28, who was killed last week in a shooting on the west side outside of Long's Bakery. As the procession approached Southerland Park Cemetery, men in a white GMC or Chevrolet pickup truck opened fire.

One of the victims has been identified as Richard Grundy III, the alleged leader of a local drug gang. He is Moore's cousin.

Two women were also injured in the shooting. Police say one was shot in the head and the other was shot in the leg. They were later identified as Renee Fisher, 32, and Barbara Jayce Wilson, 62.

Property damage was also reported to homes and at least four cars.

"How dare you not respect his family?" Asked witness Jordan Easton. "Give them some peace and let them breathe. Respect them. Respect their privacy."

Easton said children and their mothers were hitting the ground as shots rang out.

"This city is wicked. This city needs to be prayed over. This city needs help," said Easton. "I’m thankful that I go to school out of town but I would just tell anybody that has the opportunity to leave Indianapolis, leave."

In 2014, Grundy was jailed along with several associates as investigators sought to break up what they described as a murderous drug ring.

Those murder charges against Grundy were dropped and other charges against his associates were reduced. Grundy still faces counts of drug dealing, corrupt business influence and criminal gang charges. He's currently free on bond on a related case and drug charges out of Texas.

Grundy was thought to be the target of that shooting as retaliation for the murder of a man in Zionsville this spring.

"This is something that will not be tolerated anywhere in the city, said IMPD officer Jim Gillespie. "When we have multiple people shot it raises concerns that we are not going to slide by in any case, so they can expect quick justice on this."

"Yesterday we witnessed another senseless act of violence in our community. The shooting of three individuals during a funeral procession was a heinous act that cannot be tolerated. We simply cannot sacrifice our streets and community to this kind of irrational behavior.

We encourage all who may have witnessed this crime or have information regarding it, to contact IMPD and share what you know. We also call upon our community to stand committed and united in our continual fight against violence on the streets of Indianapolis.

Remember the adage 'an eye for an eye leaves both men blind.' Let’s work together for peace in our city!"