Like His Father, Donald, Jr., Has No Moral Compass 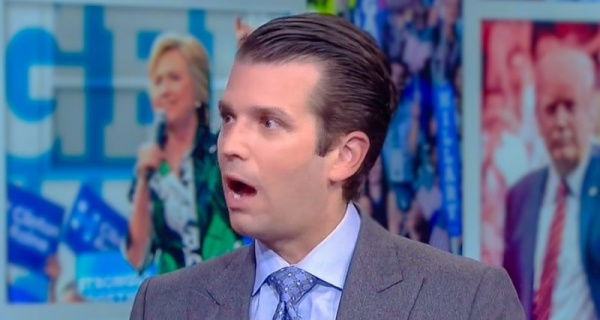 It was not a hard call. When someone says the Russian government wants to give you secret intelligence on your opponent in a presidential campaign, you don't take the meeting, at least not without the FBI alerted and listening in.

Whether you're an experienced campaign hand like Paul Manafort or a novice like Donald Trump Jr., that decision should be a simple one. I'll leave it up to Robert Mueller to determine what laws were broken, but illegality aside, the immorality of working with a foreign adversary to win a race for the White House should be obvious on its face.

But it wasn't obvious to Trump Jr., who wasn't just willing to listen to a supposed "Russian government attorney" but was so excited he wrote "if it's what you say I love it."

What happened in the meeting itself is hardly relevant. The email chain Trump Jr. eagerly released on Twitter proved once and for all the campaign was delirious at the opportunity to work with the Russian government to beat Hillary Clinton. After months of denials that there were any meetings with Russian officials, followed by months of denials that there were any inappropriate meetings with Russian officials, we now know the truth.

The truth is Donald Trump Jr. lacks the most rudimentary moral compass. One that worked, even crudely, would have resulted in a very different email chain from the one revealed Tuesday. Instead, he gleefully went down the wrong path and even now doesn't seem to recognize he's done anything wrong.

He's a real chip off the old block, isn't he? His father's defining quality, other than a need for attention so desperate it borders on pathetic, is his inability to admit a mistake of any sort, at any scale. Trump's been caught in simple lies, but he's never copped to a single one. He still claims to believe 3 to 5 million people voted illegally in November's election. At best he'll shift the blame to someone else, like when he famously said "someone gave me the wrong information" about the historical nature of his election victory.

His inability to see he has done anything wrong is also perhaps one of the most dangerous vices President Trump enjoys. A president who is congenitally unable to learn from his mistakes is one who will never learn to fix them. Trump is constantly mad at some senior West Wing staffer or another, blaming Reince Priebus or Sean Spicer or Steve Bannon for whatever pickle he's in, totally unable to realize no staff shakeup will ever solve his fundamental problem: Donald J. Trump.

That same quality is what keeps fueling the Russia collusion story. (And after Trump Jr.’s email release, we can comfortably call it a collusion story – at the very least, they tried.) Trump can't admit he made a mistake telling Comey to lay off Flynn. He can't admit his campaign had inappropriate contacts with Russian officials. The entire investigation must be a hoax concocted by a vicious media and his political enemies because the alternative – his judgment being questionable – is unthinkable.

Admitting you're wrong is losing, and Trumps never lose – not when they drive their businesses into bankruptcy, not when they're caught in a lie and certainly not when the Russians want to serve you victory from a gold-plated samovar.

That's the lesson Trump passed down to his children. The man who scammed millions of dollars out of people with a fake university and regularly refused to pay contractors the full amount he had promised them wasn't teaching his oldest son how to treat people with decency or fairness. Donald Trump Jr. learned from his father that life is a zero-sum game, that winning always means someone else loses and that winning is the only thing that matters.

Of course Trump Jr. took the meeting. It never would have occurred to him to turn down information that could help his father succeed, no matter where it came from. The eldest Trump child asked himself what his father would do, and no doubt the answer was clear as a cloudless summer sky reflecting off the windows of Trump Tower.

He did what his father would do. And it tells you everything you need to know about them both.