Obama’s Tweet To McCain Shows Trump What True Class Is 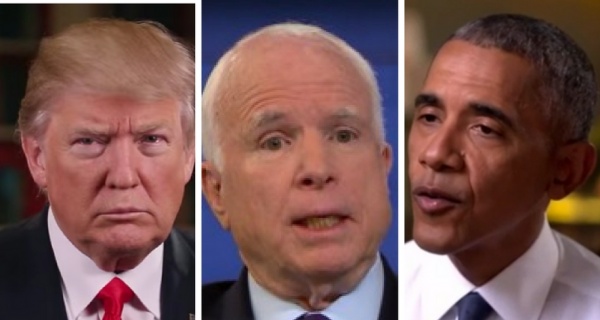 Sen. John McCain (R-AZ) was diagnosed with brain cancer following a surgery to remove a two-inch blood clot from above his left eye. Amateur president Donald Trump has failed to deliver a message on his always-busy Twitter timeline, but former President Barack Obama did to show solidarity with the 80-year-old Senator. It is, after all, not a partisan issue to show you have a person’s back when they need it most. To show that politics doesn’t have to be bitter when someone’s life might be on the line. Obama and McCain go way back to his first election. When a woman in the audience at a rally called Obama an “Arab,” McCain shut her down. In contrast, Donald Trump launched the birther conspiracy theory in order to delegitimize our country’s first black president.

President Obama tweeted, “John McCain is an American hero & one of the bravest fighters I’ve ever known. Cancer doesn’t know what it’s up against. Give it hell, John.”

Obama’s tweet has gone viral with over 373,000 likes so far. In 2015, Trump crossed the line with McCain, going where no person should go.

“He’s not a war hero,” Trump said of McCain. “He was a war hero because he was captured. I like people who weren’t captured.”

Just In: Tomi Lahren Doesn’t Understand How Walls Or Immigration Works; We Happily Let Her Know
Subscribe to our Youtube Channel
McCain, a former Navy pilot, spent approximately five-and-half years in a notorious North Vietnamese prison known as the “Hanoi Hilton,” where he was repeatedly tortured. John McCain spent two of those years in solitary confinement.

Unfortunately, Donald Trump hasn’t mentioned McCain’s health yet. The former reality show star failed to contact former President Jimmy Carter after he collapsed on Thursday while working on a Habitat for Humanity home in Winnipeg, Canada. Prime Minister Justin Trudeau did call Carter, though, to wish him well. That’s what leaders do. They lead by example.