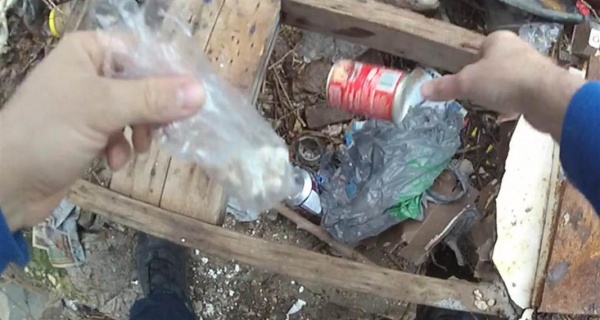 Police and prosecutors in Baltimore have launched investigations after being alerted to body camera footage that the public defender’s office says shows an officer planting drugs.

One officer has been suspended and two others have been placed on administrative duty, police said. Police said they have not reached any conclusions as to the conduct depicted in the video. Other cases in which the officers are involved are now under review as well, police and prosecutors said.

The public defender’s office, which released the footage, said it was recorded by an officer during a drug arrest in January. It shows the officer placing a soup can, which holds a plastic bag, into a trash-strewn lot.

That portion of the footage was recorded automatically, before the officer activated the camera. After placing the can, the officer walks to the street, and flips his camera on.

“I’m gonna go check here,” the officer says. He returns to the lot and picks up the soup can, removing the plastic bag, which is filled with white capsules.

Police cameras have a feature that saves the 30 seconds of video before activation, but without audio. When the officer is first in the alley, there is no audio for the first 30 seconds.

The public defender’s office flagged the video for prosecutors last week, prompting prosecutors to drop the heroin possession charge against the man arrested.

The man, unable to post $50,000 bail, had been in jail since January, according to attorney Deborah Levi, who is leading a new effort to track police misconduct cases for the public defender’s office.

Levi said prosecutors called the officer just days later as a witness in another case — without disclosing the allegations of misconduct on the officer’s part to the defense attorney in that case.

“You can’t try a case with that guy and not tell anyone about it,” Levi said.

The Baltimore state’s attorney’s office defended its handling of the case in a statement late Wednesday. After being alerted to the video, the office said, it “immediately implemented established protocols to not only refer this matter to the internal affairs division of the Baltimore Police Department but began identifying active cases involving these officers.”

It did not dispute Levi’s claim that prosecutors had put the officer back on the stand in another criminal case after being alerted to the video.

Melba Saunders, a spokeswoman for the office, said prosecutors are looking into the video, which she called “troubling.” The office did not respond to questions about the case and its handling of it.

The footage, which garnered national attention Wednesday, comes as prosecutors and police continue to deal with the fallout from the federal indictment of seven members of an elite police gun squad.

Those officers are accused of robbing citizens, filing false court paperwork and claiming overtime they had not earned.rosecutors have since dropped dozens of cases that depended on those officers’ testimony.

The officer in the body camera footage was identified by the public defender’s office as Officer Richard Pinheiro.

Pinheiro could not be reached for comment Wednesday. City records show he was hired by the department in 2011, and in 2016 earned a salary of $62,676, with a net income of $67,570. Officers in Baltimore routinely earn overtime pay.

Two other officers seen in the video observing Pinheiro are Officers Hovhannes Simonyan and Jamal Brunson, according to public defender and court records obtained by The Baltimore Sun.

The public defender working the case first alerted prosecutors last week, the public defender’s office said. Police Commissioner Kevin Davis said police only learned of the video “over the last day or so.”

Davis said his department has “not reached any conclusions, because that’s what an investigation is for.” But he noted — and released portions of — other body-worn camera videos from the incident in question that he said provided “other perspectives” than the one provided in the video flagged by the public defender’s office.

“To let that initial video that was released by the public defender's office stand all by its lonesome I think doesn't paint as clear of a picture as we would like to offer to the community right now,” he said.

Davis said officers were conducting surveillance of an area known for drug dealing when they observed an exchange. The department released three additional videos: one of a traffic stop of the alleged buyer of drugs in the exchange; one of the arrest of the suspect of the case in a convenience store; and a third of multiple officers searching the backyard lot featured in the video flagged by the public defender’s office.

Davis said the officers found drugs in each of the other three videos: on both the buyer, on the seller, and in the backyard. The drugs found in the backyard in the third video were in a knotted bag, he said.

“If I'm engaged in the distribution of drugs, I'll probably have two bags: one with a knot at the top, and one that's unknotted at the top that allows me access to the drugs inside the bag so I can easily retrieve them and then sell or distribute them,” Davis said. “So when these experienced detectives found a bag with a knot at the top, that suggested to them that there's probably an un-knotted bag nearby, because the drug dealers won't unknot and then re-knot a bag every time they go retrieve drugs from it to distribute.”

Davis said police were investigating whether the video flagged by the public defender’s office showed the officer “re-creating” his discovery of the second, un-knotted bag of drugs.

“It's certainly a possibility that we're looking into, to see if the officers in fact replaced drugs that they had already discovered in order to document their discovery with their body-worn cameras on,” he said.

Lt. Gene Ryan, president of the local police union that represents rank-and-file officers, urged people not to “jump to conclusions.”

“Everyone needs to take a deep breath, take a step back, and let the investigation run its course,” he said. “First impression, it doesn’t look good. But that’s not the complete investigation. There’s going to be a lot more done to get to the bottom of what really happened.”

The public defender’s office said the state’s attorney’s office needs to do more in response to the discovery of the video. It said in a statement that the officer seen handling the plastic bag in the video is a witness in 53 other active cases. The other two officers in the video also are listed as witnesses in pending cases, the office said.

David Rocah, senior staff attorney with the ACLU of Maryland, said that even “a faked recreation of officers finding the untied bag of drugs” would still be “potentially criminal” and should be a violation of police rules.

Rocah criticized the state’s attorney’s office for “the total lack of any apparent systemic response” to the incident, including putting the officer on the stand in another case after the video was flagged.

Rocah said it was “insane” that state laws that bar the disclosure of disciplinary records for police officers would prevent the public from seeing the results of the Police Department’s investigation or knowing how it punished the officers internally.

Rocah also said “there is zero reason to trust any video or any statement from any of these officers” given what was clearly observable in the video flagged by the public defender’s office.

“So even if it is indeed true that they simply staged a re-creation of finding the drugs, these officers have not only destroyed their own credibility, they have single-handedly destroyed the credibility of every piece of video where BPD officers find contraband without a clear lead-in that negates the possibility of it being staged,” Rocah said. "That’s quite a day’s work.”

Police discuss body camera video of possible planting of drugs
Baltimore police announce that they are investigating after being alerted to body camera footage that the public defender’s office says shows an officer planting drugs. (Karl Merton Ferron, Baltimore Sun video)
Levi said in the statement that officers should not be able to turn their cameras on and off.

“Officer misconduct has been a pervasive issue at the Baltimore Police Department, which is exacerbated by the lack of accountability.” Levi said. “We have long supported the use of police body cameras to help identify police misconduct, but such footage is meaningless if prosecutors continue to rely on these officers, especially if they do so without disclosing their bad acts.”

The Police Department conducted more than 250 inspections of body camera videos last year to assess compliance by officers with the rules governing the technology, according to records obtained by The Baltimore Sun under a Public Information Act request.

The inspectors found many officers were using the devices appropriately, but others were violating the rules — often because they failed to record. Officers saved 3,290 recordings from arrests, car stops, field interviews and other incidents, out of 3,441 incidents in which recordings were mandatory, the inspections found.

Inspectors forwarded 47 videos to internal affairs for further review of possible officer misconduct, according to the records. Those incidents were not described but included relatively minor infractions — such as an officer cursing at a person on the street, officials said.

Officers are supposed to start recording “at the initiation of a call for service or other activity or encounter that is investigative or enforcement-related in nature,” and during any other confrontational encounters. They can also stop recording under certain circumstances, such as when civilians request to not be recorded in encounters with officers and during exchanges with confidential informants.