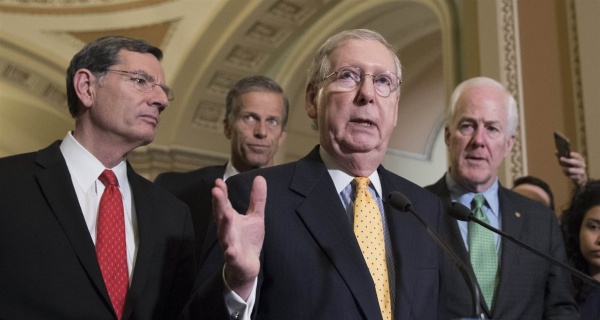 When you look at them together, there's no doubt that the Trump White House and GOP Congress are showing a consistent and dangerous pattern of going around existing rules, precedents and procedures to enact their preferred policies.

At least so far, their highly novel interpretations and uses of the policymaking process haven't been illegal. More than anything else, the ways the GOP is applying the rules appears to be designed to prevent House and Senate Democrats and even dissident Republicans from having any impact on the outcome.

They also appear to be desperate attempts to expedite the process so that the changes can be put in place without too many people knowing exactly what's being changed.

But six months after the start of the Trump administration and this Congress, the GOP's pattern of ignoring established legislative procedures is so persistent that it now has to be assumed to be its preferred way of doing business.

Consider the following, all of which have occurred since just January.

1. The year started with the GOP's unprecedented plan to do two budget resolutions and two reconciliation bills in the same year so both healthcare and tax reform could be adopted without any worry about Senate Democrats getting in the way with a filibuster.

2. Worried about the impact it would have on the outcome of the debate, the House Republican leadership decided to vote on its repeal and replace legislation before the Congressional Budget Office completed its scoring of the bill. Rather than wait to find out the bill's impact and, if necessary, make modifications based on that analysis, the House GOP barrelled forward.

3. House Speaker Paul Ryan's (R-WI) decision to move ahead without the score came after months of GOP and Trump administration efforts to discredit CBO because it's highly regarded nonpartisan analysis on everything from healthcare to taxes to the budget itself might show that the plans wouldn't come close to accomplishing what was being promised.

4. The Trump fiscal 2018 budget included a witches' brew of overly optimistic economic growth assumptions, substantial unspecified future spending cuts and near-term spending reductions even the Republican House and Senate majorities are highly likely to reject so the White House could claim the deficit would be eliminated in 10 years. As CBO showed last week in its analysis of that budget and as reported by Alan Rappeport in The New York Times, without that diabolical fiscal concoction, Trump's policies will leave a $720 billion deficit in 2027. Even that number is likely to be optimistic because it assumes that Congress will agree to all of the Trump-proposed spending cuts, which it has already shown it's not going to do.

5. Rather than go through the normal process (the one you learned by watching Schoolhouse Rock) to develop an Affordable Care Act replacement, Senate Majority Leader Mitch McConnell (R-KY) is using a bastardized procedure that completely bypasses the committees that actually know something and have legislative responsibility for...wait for it...health care.

6. Trump has tweeted that Senate Republicans should forget about reconciliation and just do away with the filibuster altogether.

7. House Republicans let it be known last week that they are seriously considering combining the 12 fiscal 2018 appropriations into a single omnibus appropriation and doing it before the start of the August recess. While omnibus appropriations are relatively common, passing one three months before the start of the fiscal year is virtually unprecedented. It's typically the last step rather the first step in the appropriations process, after one or more individual bills have been adopted and the time needed to debate the others has run out. Doing an omnibus first seriously limits the scrutiny of what's being proposed and hides changes that would never be acceptable if each appropriation was considered individually.

So far the Trump/GOP bull-in-a-china-shop legislative process strategy has only been successful in one sense: Democrats have almost totally been excluded.

But the expedited approval the White House and congressional leadership had hoped for or expected hasn't yet happened. We're now six months into an ACA repeal and replace effort that was expected to be over quickly. The fiscal 2018 budget resolution hasn't even been marked up by either budget committee let alone considered by the full House or Senate, tax reform hasn't started yet, and it's completely unclear how the fiscal 2018 appropriations and debt ceiling increase will get done by the time they are needed.

But, meanwhile, the federal legislative process is almost scandalously in a shamble.