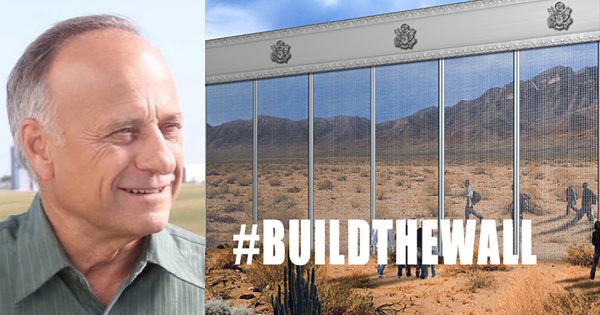 King was responding to a question from CNN’s Alisyn Camerota about whether he’s “comfortable with providing $1.6 billion of taxpayer money—not from Mexico—to build that wall?” On Tuesday, House Republicans signaled they may force a government shutdown unless Democrats agree to spend that amount on a physical border wall in the 2018 budget.

“Absolutely yes?—?and more,” King said. “And I’d throw another $5 billion on the pile, and I would find half of a billion of dollars of that right out of Planned Parenthood’s budget. And the rest of it could come out of food stamps and the entitlements that are being spread out for people who have not worked in three generations.”
An incredulous Camerota pushed back.

“You want to take food from people who are on the lowest rung in terms of the nation’s safety net and their children, in terms of foot stamps—you’re happy to take money from them in order to give the $1.6 billion for the border wall?”

King replied by asserting that the border wall will create jobs before pivoting to talking about Michelle Obama’s school lunch initiative.

“I would just say let’s limit it to that—anybody who wants to have food stamps, it’s up to the school lunch program, that’s fine,” he said.

The Supplemental Nutrition Assistance Program feeds more than 22 million low-income households containing 45 million people. Its annual budget is about $71 billion. The budget proposal Trump released in May already proposed a 25 percent cut to it over the next decade.

Trump’s border wall could end up costing as much as $40 billion and is opposed by the majority of Americans. Trump repeatedly promised Mexico would pay for the wall during the campaign, but has walked that back since taking office.

Planned Parenthood is the largest reproductive health service in the country and serves nearly 5 million people each year. Its federal funding is already in danger as Republicans push health care legislation that would defund it.

King has a history of making inflammatory comments that echo and receive praise from white nationalists.

Last month, the Democrat who was running to unseat King during next year’s election dropped out, citing death threats. King accused her of making them up, citing no evidence.