RussiaGate Is Stopping The Trump Train In Its Tracks 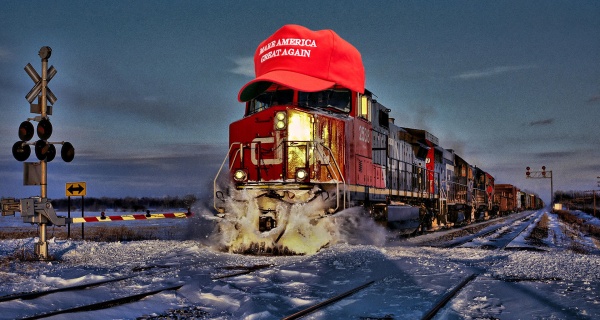 Returning from Europe last weekend, White House aides had hoped to spin Donald Trump’s divisive meeting with President Vladimir Putin as a turning point for an administration whose agenda has been overshadowed by allegations of campaign collusion with Russia. “Let’s talk about how to move forward,” Secretary of State Rex Tillerson told the press on Friday, explaining that Trump had raised the issue of Russian election interference but was prepared to move on as partners in the war on terror and, improbably, on cybersecurity. “The question is, what do we do now?”

Instead, as the U.S. delegation flew back to Washington on Saturday, Trump’s inner circle reportedly found themselves huddled in the back of Air Force One, crafting a statement for Donald Trump Jr. to give to The New York Times, explaining why he had met with Kremlin-connected Russian lawyer Natalia Veselnitskaya last June. According to people with knowledge of the discussion, the airborne group debated how transparent the statement should be, according to the Times’ Maggie Haberman and Peter Baker.

Not very, as it turned out.

The president signed off on a sparse statement that claimed the meeting was primarily focused on the issue of U.S.-Russian adoption—an explanation that had to be amended as the Times raced forward with a series of follow-up reports revealing that not only had Trump Jr. been promised dirt on Hillary Clinton, but that he knew the information was said to come explicitly from the Russian government. Seeking to get ahead of the story, the president’s son on Tuesday released four pages of communications with Rob Goldstone, the intermediary who brokered the meeting with Veselnitskaya. In the e-mails, Goldstone says that the lawyer has negative information about Clinton that is part of the Russian government’s efforts to bolster Trump’s campaign. Trump Jr. responded with unfortunate enthusiasm: “I love it.”

Blindsided staffers were reportedly in panic mode after the latest revelation, which appears to substantiate some of the worst fears about the Trump campaign’s unsavory relationship with Russia. Many people within the White House had dismissed the Trump-Russia affair as “conspiracy bullshit,” one Trump adviser told Politico. Now, aides are “essentially helpless” to contain the fallout from a story that has its origins in the heady “anything goes” days of the campaign. Members of Trump’s inner circle are reportedly filled with paranoia and suspicion over the identities of the “three advisers to the White House” who were the sources for the blockbuster Times story.

On Capitol Hill, the Republican legislative agenda has once again been sidelined by the Kremlingate melodrama. Trump has encouraged senators to complete their work on health-care reform this summer, and thus fulfill a party promise to voters, but as Russia saturates the national narrative, there is mounting concern they will have nothing to offer their constituents when they return home. One outside Republican ally called the story a “Category 5 hurricane,” according to The Washington Post. Lee Zeldin, the Republican representative from New York who called Trump Jr.’s meeting a “nothing burger” in a tweet Monday, abruptly reversed course. “I voted for @POTUS last Nov & want him and ISA to succeed, but that meeting, given that email chain just released, is a big no-no.”

Amid the furor, Trump has been conspicuously absent from the public eye since he returned from Europe on Saturday, the day the story broke. The only official comment he has made on the matter came in a brief statement via spokeswoman Sarah Huckabee Sanders, who said Tuesday that the president believes his son is “a high-quality person.”

Privately, however, Trump is said to be raging: at the media, at Democrats, and even at members of his own team whom he blames for failing to defend his family. Three people with knowledge of the situation told the Times that the president is frustrated with his own attorney, Marc Kasowitz, who leads his squad of private lawyers. The strain, apparently, is mutual: Kasowitz’s camp is said to be equally vexed, particularly with the involvement of Trump’s son-in-law, Jared Kushner, who attended the Veselnitskaya meeting and has allegedly sidestepped Kasowitz’s team by consulting with the president about Russia directly. While no decision been reached, there is speculation that Kasowitz might resign.

This latest West Wing drama unfolds against the continual prospect of a wider staff shake-up, which has hung over the White House for weeks. The most vulnerable figure is said to be Reince Preibus, the long-beleaguered chief of staff—a perennial target, especially for Kushner and Ivanka Trump and even, according to the Post, Melania Trump, who are concerned about the steady steam of leaks that have plagued the White House. But, even if the rumor is unquashable, Trump’s advisers privately believe major changes are unlikely to happen any time soon, partly due to the controversy that would ensue while special counsel Robert Mueller’s Russia investigation is ongoing.

A handful of Republican operatives are said to be clambering to Trump Jr.’s defense and, before this story broke, there had been talk among top officials about the prospect of the White House setting up its own review structure to identity problematic, Russia-related incidents and release the information preemptively. But, with nobody wanting to become targets of Mueller’s probe, the preference is reportedly to remain silent on the Russia front. Now, according to the Post, some have begun considering an offensive against the press, trawling through reporters’ work for mistakes, biases and inaccuracies to use as ammunition.

One advisor accepted that such a campaign could be pointless. “The meeting happened. It’s tough to go to war with the facts.” Still, as the White House descends into unabbreviated turmoil, the Trump clan continue to offer a self-conscious front of familial and political unity. To boost their cause, Eric Trump turned to stalwart supporter Nigel Farage, who admires the Trumps with all the adulation that the president once held for Putin, before their relationship inconveniently turned into the spectre he cannot shake off. In a show of fraternal solidarity, Eric retweeted Farage’s astute insight that Trump Jr. was under attack because he is “the best public supporter” of the president. “This is the EXACT reason they viciously attack our family!” he wrote, enthusiastically, echoing his father's literary cadence. “They can’t stand that we are extremely close and will ALWAYS support each other.”

He might well be onto something. The domestic intimacy of the Trump brood has led to a scandal in which practically every member seems linked: the namesake son who met with the Russian lawyer; his brother-in-law, who sat in on the meeting and is connected by marriage to the president’s special adviser, his daughter, Ivanka; and the president, himself, who has called his son “innocent” even as investigators presumably search for evidence that the Trump patriarch, too, was aware of the Russian government’s concerted effort to see him elected. The only thing less jarring than the tangled inter-family power matrix is the emergence of a scandal that threatens to sink the whole lot.