Could Poppa Trump Pardon Lil' Trump If He Is Convicted? 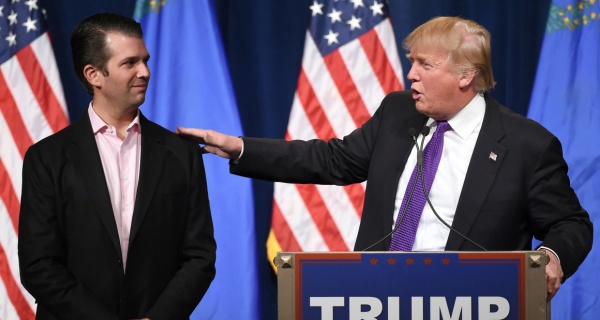 After The New York Times told Donald Trump Jr. Tuesday morning that it was going to publish emails indicating he was excited by the possibility of Russian operatives having dirt on Hillary Clinton, Trump Jr. preempted the paper by tweeting out the emails himself. Those emails are damning, to say the least. They almost certainly indicate that Trump Jr. was aware he was obtaining valuable information from a foreign source, something that is a clear violation of federal laws regarding campaign contributions from foreigners. As Jens David Ohlin, a Cornell law professor, told Vox, "It's a shocking admission of a criminal conspiracy."

So then why would Trump Jr. post the emails on Twitter, with the whole world watching? I'm not here to speculate about any possible long-game he and the president's crew are playing. Rather, what I can say is that there is a pretty clear reason why he may have felt comfortable, if Professor Ohlin is correct, admitting to a criminal conspiracy on Twitter: His dad holds the pardon power.

The president's pardon power is extreme – it applies to any federal crimes, is entirely within the president's discretion and is completely unreviewable (with one important exception that I'll get to in a bit).

The Constitution is quite clear about this. Article II, section 2 states, "The President ... shall have power to grant reprieves and pardons for offenses against the United States, except in cases of impeachment." No one else has this power – not Congress, nor the federal courts.

This pardon power has limits, but not any that are relevant here. For instance, Trump would not be able to pardon someone for a state, local or foreign crime. He also could not protect someone from having a lawsuit brought against him, either in federal or state court.

But for federal crimes, such as accepting campaign contributions from foreigners, Trump has the power to pardon anyone without restriction. The president's reasons for pardoning someone can be wise or stupid, noble or self-serving, serious or silly. He can pardon as many or as few people as he likes. Moreover, the president can pardon anyone, whether that person is a complete stranger or, for instance, his son. There's no limit on familial pardons.

The president's power even extends to people who have not yet been charged with a crime. The Supreme Court made this entirely clear in 1866, when it wrote that the power "extends to every offence known to the law, and may be exercised at any time after its commission, either before legal proceedings are taken, or during their pendency, or after conviction and judgment." (Emphasis added.) Famously, President Ford used this power to pardon President Nixon, less than a month after Nixon resigned. In "Proclamation 4311 – Granting Pardon to Richard Nixon," Ford wrote:

"Now, Therefore, I, Gerald R. Ford, President of the United States, pursuant to the pardon power conferred upon me by Article II, Section 2, of the Constitution, have granted and by these presents do grant a full, free, and absolute pardon unto Richard Nixon for all offenses against the United States which he, Richard Nixon, has committed or may have committed or taken part in during the period from January 20, 1969 through August 9, 1974."

So is it really any surprise that Donald Trump Jr. felt comfortable tweeting his emails Tuesday morning? After all, his father now holds the power that Ford used to pardon Nixon. Even though Trump Jr. hasn't been charged with a crime, his father can pardon him. If he does, Trump Jr. will be free and clear.

All that being said, there is one way in which the president's pardon power is reviewable. It's not in the legal sense of the term, as no court is ever going to review a pardon from the president. Rather, it's in the political realm. Some presidential powers are, to use language from one of the Supreme Court's earliest and most famous decisions, Marbury v. Madison, "only politically examinable."

This means that, if pardoned, Trump Jr. would never face any criminal charges, and no court or other politician could change that.

But the people of the United States could hold President Trump accountable for the outrageous act of preemptively pardoning his son. If there are enough people enraged by such an action – as there should be, if it were to happen – they could demand their representatives stand up to Trump and maybe even impeach him over the matter. Or, if they won't do anything about it, vote them out of office. In other words, if Trump uses the presidential pardon power in a way the people don't like, the people can vote against his party in 2018 and against him in 2020. That's the one and only limit on the pardon power.

Right now, however, it's hard to imagine that being an effective limit. Trump would no doubt spin a pardon as standing up to the liberal, fake-news media, satisfying the anti-left urges of a sizable portion of the electorate. And Republicans in the Senate and House would almost certainly express their consternation – while continuing on their merry way toward ripping health insurance away from 22 million Americans.

Political limits are powerful, but difficult. Which is exactly why, given the immense power his father has, Trump Jr. can seemingly admit to a crime on social media.