Koch Brothers Are Trying To Tilt Courts Toward Conservatism 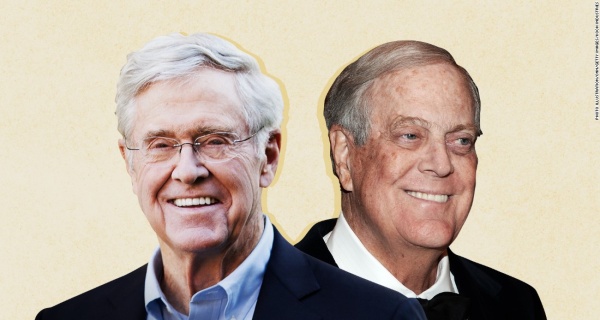 The influential donor network tied to billionaire Charles Koch is taking aim at a longstanding Senate tradition that allows Democratic senators to block judicial nominees from their states, as conservatives race to seize on one-party control of Washington to rapidly reshape the federal judiciary.

Their target: The “blue-slip” process, which keeps judicial nominees from moving forward in Senate confirmation if a home-state senator raises an objection. Since Republicans hold a narrow 52-48 majority in the Senate, honoring the practice could give Democrats significant power to delay confirmation of President Trump’s nominees.

“Having a home-state senator have the ability to slow down the process, in our opinion, doesn’t make sense under the Constitution,” Mark Holden, a top official in the Koch network, told USA TODAY. “If you look at why (President) Trump won, he wanted to change the culture of D.C. and what’s going on there.

“Some of these arcane rules in the Senate, they don’t make a lot of sense,” Holden said.

At a recent private retreat in Colorado for some 400 of the network’s donors, Koch officials distributed a one-page document, explaining the blue-slip practice and urging attendees — many of them big players in Republican politics — to press the issue with the Senate’s GOP leadership and “other Republican senators you know.”

“Tell them not to allow needless delay tactics and obstruction of the process,” the document read.

The stakes are high.

Trump entered office with more 100 vacancies on the federal bench — an opportunity, created, in part, by Senate Republicans blocking many of President Barack Obama’s nominees before he left office. Removing the blue-slip obstacle could help Trump reverse, in a single term, the Democrats’ advantage on the nation’s 13 federal appeals courts and shape the federal judiciary for decades.

Currently, nine of the 13 appellate courts have a majority of Democratic presidents’ nominees. As of Thursday afternoon, Trump had announced 22 nominees tor the lower courts, including nine to the appeals courts, considered a pipeline to the Supreme Court. Federal judges have lifetime appointments.

More lower-court nominations are on the way.

Leonard Leo, the executive vice president of conservative Federalist Society who has advised the White House on judicial picks, told USA TODAY that Trump already has signed off behind the scenes on a “few dozen” more still-to-be-announced nominees to the federal bench.

Holden's network plans to spend as much as $400 million to advance its free-market, limited-regulation agenda ahead of the 2018 elections. He called the lower-court nominations a “huge priority” for the political empire associated with Koch and his brother, David Koch.

The Supreme Court typically takes only about 80 cases a year, so the group is focused on shaping the lower courts that "are rendering all the decisions,” Holden said.

The Koch's Kansas-based industrial conglomerate, Koch Industries, is among the corporate donors to the Federalist Society, and Leo attended the June donor conclave.

Other Republican-aligned activists are weighing in, too.

On Friday, the conservative Judicial Crisis Network, which spent $7 million promoting Justice Neil Gorsuch for the Supreme Court, began a $140,000 ad campaign in Michigan to push another Trump pick. Its 30-second commercial calls on the state’s Democratic Sens. Debbie Stabenow and Gary Peters, who could use their blue slips to veto Michigan picks, to back Joan Larsen, a Michigan Supreme Court Justice nominated to the U.S. Court of Appeals for the 6th Circuit.

The blue slip is a century-old practice of senatorial courtesy and refers to the blue-colored form that the chairman of the Senate Judiciary Committee sends to a nominee’s home-state senators. Senators can send it back with a positive response to move the nomination along. If senators object, they either don’t return the form or return it with a negative response.

Iowa Sen. Chuck Grassley, the Republican chairman of the Senate Judiciary Committee, has said he expects to abide by the blue-slip tradition. But he and other top Republicans also say home-state senators should have less say about nominees to regional appeals courts, which cover multiple states.

Holden said many of the Koch donors are "incensed by the obstruction in D.C. and think this is a key issue and are going to make their opinions known to their senators" and key players, such as Grassley.

For their part, Democrats and liberal groups have accused Trump of outsourcing the judicial vetting process conservative organizations, such as The Federalist Society and The Heritage Foundation think tank.

In a May memo, California Sen. Dianne Feinstein, the top Democrat on the Senate Judiciary Committee, said ending the blue-slip practice would allow “nominees to be hand-picked by right-wing groups.”

Nan Aron, president of the liberal Alliance for Justice, said stripping Democrats’ power to a “have a meaningful conversation” with Republicans about nominees could undermine an independent judiciary

“The administration, together with ultra-conservative groups, will pack individuals who will rubber-stamp President Trump’s agenda across a range of issues,” Aron said. “That’s what so dangerous about doing away with the blue-slip process.”

Leo of the Federalist Society said every president consults with outside organizations about nominees, but the final decision rests with Trump.

“The president and his advisers are making the picks,” he said. “This outsourcing thing is a canard. It’s basically the Senate Democrats' way of avoiding responsibility for moving the process along.”