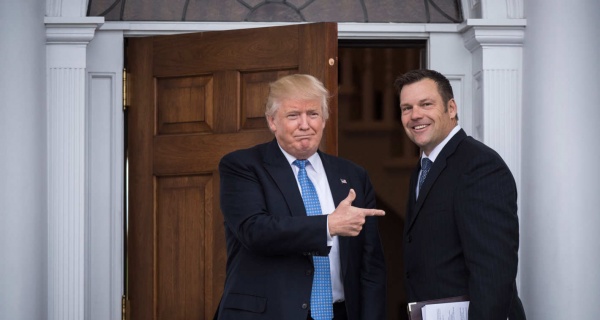 Almost no one in the United States commits voter fraud. This is backed up by numerous studies, and also makes logical sense: Defrauding the voting system entails a lot of risk and no reward, so there's little incentive to risk a felony conviction to cast an extra vote that is virtually certain not to change the outcome of an election. This is especially true for undocumented immigrants who would risk deportation to vote. And, in general, Americans are hardly so committed to voting that they're breaking the law to cast extra ballots – the turnout rate among the voting-age population is, in fact, pretty dismal.

But Donald Trump expects the American people to believe he lost the popular vote because three to five million people so fervently desired to vote for Hillary Clinton that they were driven to commit felonies.

During the campaign, Trump warned that he might not accept the outcome of the election if he lost. But it turns out that even though he won, and secretaries of state from both parties have denied any significant voting irregularities, he's willing to question the legitimacy of the nation's electoral system. In the months since he first tweeted that millions of people voted illegally, Trump has provided no evidence for his absurd claim, and in a saner world it would be written off as the rantings of a habitual liar with a bruised ego. But Trump's lie or delusion concerning his popular-vote loss is built upon a myth of voter fraud that Republicans have carefully cultivated to justify regulations – such as voter-ID and proof-of-citizenship requirements – that make it harder to vote for Democratic-leaning populations like minorities, young people and low-income individuals.

And now, Trump's new Presidential Advisory Commission on Election Integrity appears to be aimed at ginning up support for further voter-suppression efforts.

Trump's commission is led by Kris Kobach, the Kansas secretary of state who's now running for governor. Kobach is the legal mind behind a slew of anti-immigrant and anti-voter laws implemented across the country, many of which have been struck down by courts. He's been called "the king of voter suppression" by the ACLU and "the most racist politician in America" by Kansas' Senate minority leader. Kobach was such a dedicated birther that he demanded even more information after Obama released his birth certificate before placing him on the Kansas ballot. He was recently fined by a federal court in a case challenging his state's voter restrictions for making "patently misleading representations to the court" regarding a memo he provided to Trump about such restrictions.

Though the commission has yet to meet, Kobach sent letters to all 50 states and the District of Columbia requesting an unprecedented amount of voter data, including voter addresses, birth dates, partial social security numbers, voting histories and party affiliations (even though one's party affiliation has no relevance to one's eligibility to vote). The letters requested that the data be provided by July 14th, via email, and explained that the information would be made available to the public.

Responses from red and blue states alike have ranged from politely explaining that their state laws forbid the release of some of the requested information to more emphatic refusals to comply – for example, Mississippi's Republican secretary of state advised Trump and Kobach to "go jump in the Gulf of Mexico." Forty-eight states and D.C. have responded that they will not or cannot provide some or all of the requested information. The other two have not yet responded.

As states began to decline to provide the requested data, Trump tweeted, "Numerous states are refusing to give information to the very distinguished VOTER FRAUD PANEL. What are they trying to hide?" States don't have anything to hide, but they do have an obligation to protect the privacy of their citizens and obey the law.

Kobach's request is legally problematic in many ways. It likely violates the Privacy Act, which limits the kinds of data the government can ask for and includes procedural requirements aimed at preventing data breaches and misuse. It's also a likely violation of the Paperwork Reduction Act, which requires federal agencies to give notice of and seek approval for potentially burdensome information requests. Furthermore, collecting that much data in one place is a recipe for a national security disaster, and the Electronic Privacy Information Center has sued the commission alleging statutory and constitutional violations.

The data request also makes no practical sense. Kobach has called reports that nearly all states have declined to provide some of the requested information – you guessed it – "fake news." The reports are factually accurate, but Kobach argues that the request is only for information that is publically available (under certain circumstances), so most states are complying. Indeed, even Kobach isn't providing all the requested information from Kansas' voter rolls because state law limits what he can disclose. The same is true of other secretaries of state serving on the commission. This means the commission's database will be a hastily compiled hodgepodge of voter information useful only for comparing states' voter rolls to each other and to federal databases – a process that will result in thousands of false positives – in order to produce junk analysis to support Kobach's claims that people are voting in multiple states and noncitizens are voting in large numbers.

Kobach has played this game before. He was an avid proponent of the Crosscheck program, which compares the voter rolls of more than 30 states looking for people registered in two states based on names and birth dates. Crosscheck produced thousands of false positives, resulting in purges of eligible voters from the rolls. Beyond the problem of John Smiths who share birthdays – an estimated two million people – being being confused for one another, being registered in multiple states does not indicate the intention to commit voter fraud. All it indicates is that the voter has moved. Trump associates who have been registered in more than one state at some point include Steve Bannon, Ivanka Trump, Jared Kushner, Tiffany Trump, Steven Mnuchin and the dude who apparently inspired Trump's wacky claim that millions of people voted illegally – which Kobach has since endorsed.

Kobach should know better than anyone that voter fraud isn't a real problem, because the Kansas legislature gave him the authority – unique among secretaries of state – to prosecute the crime. Though Kobach claimed there were as many as 18,000 noncitizens registered to vote in the state, he had a tough time finding anyone to prosecute. He obtained nine convictions, mostly of confused older voters who owned property in two states and made honest mistakes.

As frightening as it is that the Kobach commission appears to be aimed at gathering evidence to support the bogus premise that millions of people are voting illegally, there may be a silver lining to this debacle. Republicans, having realized their preferred policies are deeply unpopular with growing segments of the population, have resorted to impeding those likely to vote against them. Until now, the party that claims to oppose burdensome regulations has been able to do this largely under the radar through overregulation at the state level that may seem reasonable to the casual observer.

Overregulating the voting process at the state level has been a very effective way for Republicans to keep lower-income people from exercising their constitutional rights without being open about what they are doing (similar to the strategy of attacking abortion rights through the overregulation of clinics). But Trump's tweets and the elevation of Kobach illuminate the strategy in ways that will make it hard for anyone who genuinely cares about the integrity of elections to believe Republicans are acting in good faith.

Trump won the Electoral College thanks to tiny margins in three states. Demographic trends are not in his favor. Having opted not to appeal to minority voters, suppressing their vote is his best hope for reelection and maintaining GOP control of Congress in the midterms. But the attempts to justify his outlandish million-illegal-votes claim may stretch the voter-fraud myth to the point of breaking.

The U.S. has an ugly history of racially discriminatory voting laws. Trump and Kobach have made it impossible for anyone who cares about empirical evidence to deny this is the latest chapter. But whether state Republican officials will continue to protect voters in defiance of Trump, or join him in winning elections by any means necessary, remains to be seen.