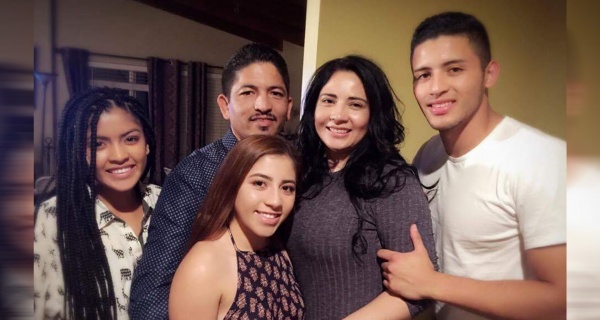 Jorge Ramirez, an Oceanside minister and unauthorized immigrant, didn’t think he would end up in line for deportation when he encouraged his U.S. citizen daughter to vote for now-President Donald Trump.

In line with his conservative religious beliefs, Ramirez considers himself a Republican, he said in an interview at Otay Mesa Detention Center, where he is awaiting deportation proceedings. Border Patrol picked him up after staking out his house early one May morning, and he’s been in the detention facility since.

Ramirez said he does not know why he is being targeted for removal from the U.S. The Trump administration has said that it is targeting criminals and those who have already been ordered deported. Ramirez said he falls into neither category.

“Trump said, ‘Let’s keep all the good people here and all the bad people out,’” Ramirez said.

“That’s great, but I’m here,” Ramirez said of his detention situation. “If I’m here, anybody can be here. I’m not saying I’m the best person in the world, but I’ve tried to live a good life.”

Ramirez worked as a satellite television technician, and frequently went to Camp Pendleton. Issues with his security clearance brought him to the attention of authorities in December.

He said he supports the Republican agenda on both fiscal and social issues and that he still supports Trump.

“Everything that he’s said against immigrants — it’s not that I’m in favor, but bad people don’t belong here,” Ramirez said. “In order to make America great, you have to have people contributing to this country.”

Ramirez said he also encouraged his youngest daughter to volunteer with the campaign of Rep. Darrell Issa, R-Vista.

Ramirez came to the U.S. with his family when he was 11 and was raised in North County. In high school, Ramirez joined the Junior Reserve Officers’ Training Corps for the Marines, and when the Gulf War began, he tried to enlist. The military would not let him fight because of his immigration status.

“I’m USA all the way,” Ramirez said. “It’s that American spirit. It just gets into you.”

He said wearing his uniform twice a week helped him to feel like he belonged. He recalled his earliest experiences in school in the U.S., when he didn’t understand what anyone was saying and other students would make fun of him.

When he worked as a satellite television technician, always tried to show the Marines he encountered how grateful he was for their service, he said.

“They sacrifice so much for freedom and for us,” he said.

The issue he has with the way immigration policy is currently being implemented, he said, is that since he’s been in immigration detention, he’s seen good people in there.

“To think that undeserving people are coming here makes me sad,” Ramirez said.

Ramirez believes that going to immigration detention is part of God’s plan for him. He prayed for a way to sort out his immigration status not long before he was arrested by Border Patrol.

Inside the detention facility, he’s been counseling and supporting other detainees with a message of hope and love, he said. Since he began attending a daily Bible study group in the facility, its numbers have grown to around 25 from about 10, he said.

Ramirez has spent his life as part of the Apostolic Church, where he is a music minister. His father served as a pastor, a post that led to the family coming to the U.S.

Ramirez said he met his wife, Silvia, through church. They married 22 years ago.

Being away from her has been one of the most difficult parts of being in detention, he said.

Ramirez hoped to get released on bond Thursday at an immigration court hearing. His three children, all U.S. citizens, came with Juan Hernandez, the pastor for their church, to watch. They prayed in the waiting room as they waited their father’s turn.

His attorney, Ruben Salazar, said he felt positive about Ramirez’s potential for bond and for getting relief from deportation when he presents his full case in immigration court.

“He’s the kind of immigrant America seeks to have,” Salazar said.

As the family was escorted into the courtroom, Judge David Anderson was telling Salazar that he would need more time to read through the 210-page packet that Salazar had submitted that morning to show Ramirez’s ties to his community. It included several letters of support, records of Ramirez’s tax filings, his school achievements and the awards that his children have won.

Anderson rescheduled the hearing for August, so Ramirez will have to wait in detention for at least six more weeks. Salazar objected, unsuccessfully arguing that the delay violated Ramirez’s constitutional rights.

As his children filed out of the courtroom, Ramirez’s face remained tight, not seeking eye contact or showing emotion.

Outside the courtroom, their pastor consoled the Ramirez children. He reminded them that there must be a greater purpose in this moment. They rehearsed lines to say to the Spanish-speaking media waiting for them outside. The youngest, Abisag, 17, volunteered to call their mother, who was waiting at home for news. By the time Ramirez has his rescheduled hearing, Abisag, will be in New York for her freshman year of college.