Trump's Tweets Are A Serious Problem For America 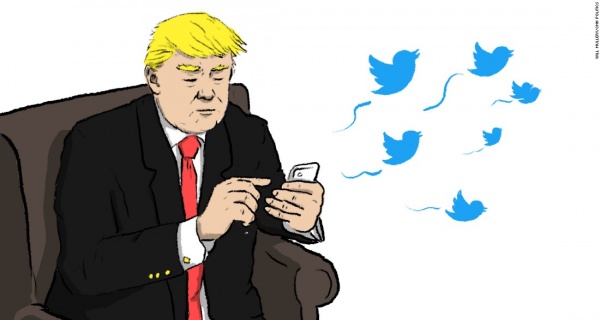 At the end of a week when the head of the EPA openly questioned climate science, the Muslim travel ban came back to life, Senate Republicans floated new strategies to repeal Obamacare, and a White House “voter fraud” commission requested the personal data of every voter in the country, many people were most shocked by Trump’s tweets – especially insults directed at Mika Brzezinski and a video depicting the President literally bodyslamming CNN – and the damage they might do to the legacy of the Oval Office. Are Trump’s tweets worth the press and public attention, or are they a useful ploy for a White House eager to distract from bad news?

I don’t buy the periodic refrain that the media must minimize (or even stop) coverage of Trump’s tweets because they distract from the even greater horror stories of his White House. First, the tweets are news in themselves. Second, the media (and this includes non-Fox cable news) are covering the other stories. Third, it’s a condescending conceit of some liberals to assume that while they can follow Trump’s tweets and the other news threads at the same time, the great unwashed public can’t. In the Sunday Times roundup of the “most read, shared and discussed posts” in the paper last week, the taste testing of hot dogs ranked higher than the coverage of the healthcare bill. Does that mean that Times readers didn’t follow healthcare while ogling Hebrew National franks or following the Mika Brzezinski fracas? Of course not. The same is true of most voters who try to keep up with the news, however spottily at times, regardless of their politics.


Trump’s tweets aren’t aimed at news consumers. They are intended to rally his base, which would dismiss mainstream media coverage of health care and the other stories as “fake news” even if their leader were not offering them the bread and circuses of daily Twitter tantrums. The base will keep the faith no matter what outrages he commits online or in the Oval Office. As I write in my current piece in the magazine, Richard Nixon’s populist right-wing base, in many ways analogous to Trump’s and similar in size as a percentage of the populace, remained loyal right through his resignation: polls showed Nixon still had a quarter of the country behind him when he was not only on track to be convicted of impeachable charges by the Senate but also in jeopardy of criminal charges that could have sent him to prison had he not been subsequently pardoned by Gerald Ford. Trump’s base would remain loyal to the bitter end even if the press stopped covering his most distracting stunts and focused only on his most catastrophic official actions.

Meanwhile, the news value of last week’s tweets should not be underestimated. There’s nothing new in Trump letting loose with a nasty misogynistic blow like the one he landed on Brzezinski. What is new is the back story of an alleged blackmail effort by Trump and/or Jared Kushner to use the threat of a National Enquirer expose on Brzezinski and Joe Scarborough as a cudgel to win favorable Trump coverage on “Morning Joe.” Scarborough has tweeted that he has phone records and texts from Trump’s “top aides” to prove this. It is incumbent on him and MSNBC to release that evidence now, particularly given the prominent role “Morning Joe” played in boosting Trump’s candidacy when it counted most, in the early stages of the campaign.

As for the Trump tweet of his “wrestling” CNN to the ground, it is not news that he hates the press, hates CNN in particular, and has called for violence against his critics. Nor is it a novelty that the imagery in a Trump tweet was lifted from a post by an alt-right thug known for anti-Semitism, Islamophobia, racism, and homophobia. But the new level of Trump mental instability dramatized by this tweet is notable. The escalating violence of his tweets at a time when his and the GOP’s entire agenda is on life-support makes you wonder if a complete breakdown is arriving sooner than I and others have thought. The wrestling tweet is batshit crazy, comparable to a drunk Nixon talking to the pictures on the White House walls during his final meltdown.

Unable to pass their Obamacare repeal-and-replace before the holiday weekend, Senate Republicans have begun talking about an outright repeal of the health care law, gaming a new Congressional Budget Office score, and even bipartisan compromise. Will they eventually succeed?

The Senate health care bill, which has an approval rating in the high teens (at best) in polls, is most likely dead. The GOP cannot agree on what it should be, and there is no evidence to suggest that Mitch McConnell’s last-ditch attempts to buy off wavering members of his caucus (with a pitiful $45 billion for opioid treatment, for instance) have had any effect. Meanwhile, Trump has undermined every conceivable GOP effort to find unity by electing to use his bully pulpit to attack the press rather than sell a health-care plan. He hasn’t even stated an opinion of what such a bill should be. His most concrete statement during the campaign — “insurance for everybody” that would be “much less expensive” and “much better’ — has long since been defunct (until it’s revived in Democratic television ads). He has even dismissed as “mean” the House health-care bill he celebrated in the Rose Garden after it was passed. At the end of the week Trump also reversed his campaign claim that he would repeal and replace Obamacare simultaneously after watching a Republican Senator, Ben Sasse, on Fox News calling for a repeal without a replacement. That’s not going to happen unless the GOP wants to risk an even bigger trainwreck in the American health care system as voters head to the polls for the 2018 midterms.

Meanwhile, Republican Senators are going home for the holiday to find (or hide from) angry constituents in heightened panic about their medical care. Under government rules, insurers must give their customers 180 days notice if their plans will no longer be offered at the end of a calendar year. As a consequence of the Trump administration and Congress’s destabilization of Obamacare, the Wall Street Journal reported on Friday that “hundreds of thousands” of such letters are going out right now to those who purchased plans under the Affordable Care Act in such states as Nevada, Indiana, Iowa, Virginia, Tennessee, Kentucky, Mississippi, Ohio, Georgia, and Wisconsin. It’s against this backdrop that a divided Republican caucus will return to Washington to “fix” heath care in the brief window before August recess— even as other pressing issues (raising the debt ceiling, for instance) start slapping Congress in the face. If there is any happy ending to this story for either the GOP or the country, it eludes me.

In the run-up to Trump’s first meeting as President with Vladimir Putin this week, his national security advisor noted that the President has done little strategic preparation and will approach Putin with “no specific agenda.” What do you think they’ll talk about?

At least one person will arrive at that meeting with an agenda: Vladimir Putin, who already has plenty of reason to regard the American president as an intelligence asset rather than an adversary. And after seeing Trump unravel on Twitter last week, he is probably feeling more empowered than ever to play Trump for everything he can get. Given the latest public evidence pointing to collusion between the Trump campaign and Russia — Shane Harris’s investigative reports in the Journal further tying Trump’s circle, especially Michael Flynn, to dissemination of the hacked Clinton emails — you’d think Trump’s number one agenda item would be to put as much distance as possible between himself and Putin, to call Russia out on its interference in the 2016 election, and to assert America’s alliance with NATO. But if there’s anything we know about Trump, it’s that he is irrational, he listens to no one except talking heads on Fox News, and that he’s a liar. Anything can happen, and we can be certain that whatever does will be misrepresented in 140 characters profusely littered with exclamation points.