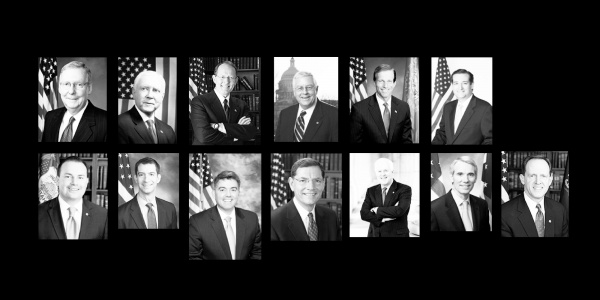 All are Republicans; McConnell did not even make a token gesture toward bipartisanship. All are well off economically; most are multimillionaires. All are men, even though there are 21 women in the Senate, including five Republicans. And all are white.

The Senate has always been a club of privileged white men. But the composition of the task force is not just a mindless repetition of old habits. Instead, it is McConnell's way of saying to the country, "White men are back in charge."

To be fair, several of the 13 have qualities that are important to addressing an issue as big and important as health care. Three are members of the Senate's GOP leadership: Cornyn, Thune, and Barrasso (who also is a physician). Three others serve as chairs of the standing committees that would be heavily involved in drafting the legislation — if the Senate were following regular order. Alexander chairs the Health, Education, Labor and Pensions Committee; Enzi chairs Budget; and Hatch chairs Finance.

The other six do not appear to have any special knowledge about health care, health care finance or the insurance business. McConnell pointedly excluded three female Republicans (Susan Collins of Maine, Deb Fischer of Nebraska, and Lisa Murkowski of Alaska) who serve on relevant committees and who have longstanding interests in health care. He also excluded the only black Republican senator, Tim Scott of South Carolina, who had been in the insurance business before entering politics and serves on the Health, Education, Labor and Pensions Committee.

McConnell surely did not expect his 13 appointees to produce a bill that would improve health care for all Americans. He certainly did not expect them to identify with the millions of Americans who, prior to the passage of Affordable Care Act in 2010, could not get decent, affordable health insurance. Rather, McConnell was indulging in this nation's oldest form of identity politics. Nothing says "this is a white man's country" more clearly than the group he assembled.

The presumptuousness is breathtaking: 13 well-heeled white men pretending to design a health care system for 300 million Americans. It is not surprising that their product, which was released on June 22, shows so little understanding or sympathy. These men have the best health care money can buy, courtesy of the American taxpayer. It is not likely that any of them has suffered chronic illness or been forced to choose between buying medicine and buying food. None of them has gone bankrupt providing medical care for a sick child, and none of them can fully understand the agony of a problem pregnancy. By dispensing with committee hearings, McConnell ensured that the worries and diverse experiences of ordinary Americans would not interfere with his group's secret deliberations.

McConnell, Cornyn and other members of the task force have benefited greatly from a system of white male privilege, so that's how they think things should be. There is no way to change their minds. What they produced, however, shows how badly we need to change who controls the levers of power in Washington. That is what we should be working on.