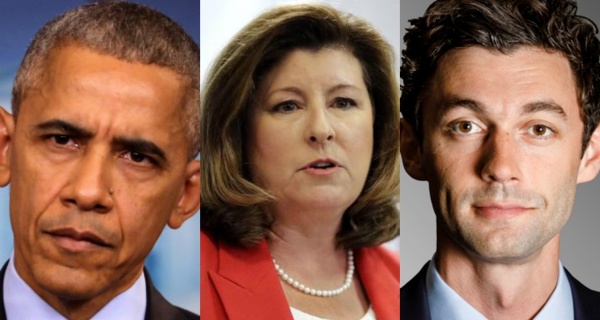 In a normal year, this district wouldn’t be competitive at all. But this isn’t a normal year. We have the least popular president in our history in office and he happens to be dragging the rest of the party down with him — at least that will be the argument if Ossoff manages to win the squeaker election.

Because the election is being seen as a referendum on Trump, a Trump Super-PACs are aggressively targeting voters with some pretty awful tactics, including associating Ossoff with the gunman who shot Rep. Steve Scalise during a baseball practice. Another Trump Super-PAC is using President Obama’s voice to mislead voters into voting against Ossoff.

Great America Alliance, which calls itself the “largest and most effective pro-Trump Super PAC,” took a passage from Obama’s book “Dreams From My Father” to use it against Ossoff. The passage describes Obama’s first haircut after arriving in Chicago to become a community organizer.

Obama’s barber, named Smitty, speaks in the passage of the racial and political tension in Chicago before the city elected Harold Washington as its first black mayor in 1983, and the neglect African Americans felt from the Democratic Party at the time.

In the paperback version of the book, Obama directly quotes Smitty’s words. In the audio version, Obama reads them aloud.

Only instead of using the real meaning of the passage, Great Alliance turned it on its head as a way to get African-American voters to not vote for the Democrat.

In the ad, an African-American man named Autry Pruitt says, “Hi, my name is Autry Pruitt, a fellow black American working hard every day, just like you. It may seem out of season, but all of a sudden, Democratic politicians have started coming around again. We normally only see them every other November, swarming around and making promises to get our vote. But nothing ever changes for us, does it? Here’s what President Barack Obama had to say about it.”

Then, President Obama’s voice comes on with the out of context quote:

“A plantation. Black people in the worst jobs. The worst housing. Police brutality rampant,” Obama says. “But when the so-called black committeemen came around election time, we’d all line up and vote the straight Democratic ticket. Sell our souls for a Christmas turkey.”

Then Pruitt tells listeners not to “sell out for another Christmas turkey.”

The real passage, though, had nothing to do with the Democratic Party. Instead, it laments a time before Chicago elected its first black mayor, Harold Washington.

The misinterpretation is so blatant that Politifact ranks it a “pants on fire” lie.