In Georgia, This Family Of Republicans Will Vote Democrat In The Special Election 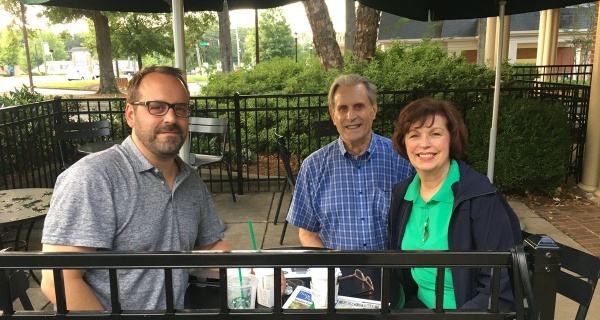 But on Tuesday, the Pilger family plans to cross party lines to do something they once considered unthinkable — voting to elect a Democrat to Congress.

“[Handel] is a Republican, and I don’t want a Republican representing my district in this era and in these times,” said Abigail Pilger, 73, in an interview at a Starbucks.

Traditionally Republican voters like the Pilgers are essential for understanding why Democrat Jon Ossoff, 30, even has a chance Tuesday in a district that Rep. Tom Price won by more than 20 points this fall, and that Democrats haven’t held for decades.

Though in the heart of ruby-red Georgia, Hillary Clinton came within a point of winning the district. That’s largely thanks to the affluent, educated suburban voters who swung away from the Republican Party across the country in 2016 and do not like Donald Trump. In the Republican primary, Trump lost every county in the Sixth District — one of the wealthiest and best-educated in the state — even as he won the state overall.

These anti-Trump Republicans are also key for Ossoff’s hopes on Tuesday. This weekend, I had coffee with the Pilgers and their son Joel at a Starbucks in the city of Alpharetta, one of the wealthiest parts of the district, to better understand why they were breaking party ranks.

A transcript of my conversations Sunday with the Pilger family follows.

The three of us are all Republicans who are now recovering and are more independent than ever. That doesn’t mean I would have voted for Hillary — I didn’t — but Trump is ruining this country. This time, we’re all for Ossoff.

We did vote for Tom Price, every time. Tom Price’s stated positions and his performance more or less coincided with the way I look at things: in particular, being fiscally conservative.

What changed to make you now skeptical of the Republican Party?

I’m very libertarian; we both are. Neither of us voted for the mainline candidate in 2016; we both voted for the Libertarian, Gary Johnson. Why were we skeptical of Trump? As soon as he announced in 2015 — and we read the New York Times, the Wall Street Journal, the AJC, and many other things online — but we had started telling friends that we thought he was, if not in the clutches of the Russian government, then too enamored with the Russian regime. We were calling him the “Siberian candidate” this time around.

We were very skeptical of him as a person and as a candidate. We knew he was all about show and everything was all about him — for the Trump name, to make money for Trump, to have publicity for Trump that he was getting from running.

Do you have a lot of friends and family who voted for Trump?

My whole family voted for Trump, except for [my husband]. A lot of people around here — they really weren’t for Trump, particularly at the beginning. They were for [Marco] Rubio, they were for [Ted] Cruz — anybody but Trump.

Once he became the [Republican nominee], a lot of them said, “We can’t have Hillary, so we’re voting for Trump.” And I said, “I, in good conscience, can’t vote for someone who will destroy the Republican Party.” And he’s done a good job of that, and he’s continuing to do a good job of it right now.

So you’re both voting for Ossoff now. But you’re libertarians, and a lot of voters here say Ossoff is a liberal. How do you reconcile that?

Because he’s not going to be a Republican in the House of Representatives to give more credence to Trump’s agenda. The Republican agenda, right now, is crappy. Everything they’re doing is to undo what Obama did, regardless of who it hurts — whether it’s conservative policy or moderate policy, it’s all about undoing the Obama eight years.

I’m not saying everything Obama did was right, but you can’t just — I mean, just look at health care. It’s all in secrecy, just like they lambasted the Democrats for doing, and I’m thinking, “You’re no better than the competition!”

Are you worried about reports that the bill will take health insurance from 23 million people?

Oh, of course. I’m on Medicare — I see what it does for us. My son is self-employed, and he’d have to spend a fortune for health care if he couldn’t get on the exchanges. I see it in my own family, and I’m thinking, “What in the hell is going on?”

Health care is too complicated. I wasn’t for the Obama/Democratic plan that came into being, but so many people have been saved, particularly those with preexisting conditions, that I can’t say you have to completely repeal it. That’s madness.

It’s really one of those things where there may be some things that need to be done, but you know what it will come down to? When the Democrats take power in 2018, and they will — whether it’s House and Senate or just one of them — I think it will come down to Medicaid for everyone. Because I hope they don’t pass Trumpcare. That’s what it should come down to.

What’s interesting to me about this is that you say you’re a libertarian, which is very conservative on economics, while also anti-Trump —

But in a way, Tom Price — who you voted for — is behind the health care bill more than Trump is.

Yes, he’s in charge of Health and Human Services, and he’s being directed by Paul Ryan. The Senate has a dozen or so people who are supposedly writing their version, and they’re doing it in secret and won’t present it until they have this bill put together. You don’t know a darned thing about what’s in it. So I’m thinking, “This is crazy; it’s no different than it was in 2009!”

As a Republican, was it tough for you to support a Democrat like Ossoff? What were your hesitations?

I had no hesitations. I voted for him the first time; I’m voting for him in the runoff. And I had voted [for] and supported and sent money to Karen Handel when she ran for the secretary of state and when she ran for governor.

And I like her as a person. But unfortunately she’s a Republican, and I don’t want a Republican representing my district in this era and in these times. This is the era when we need to say, “No more; you’ve got to come up with a better plan.”

If Ossoff wins, how much of it do you think has to do with the Republican health bill?

In the Sixth District, health care is a big concern even though economically we’re better off than any other in the state. We’re also the better educated in the whole state. So I think our education — and our feeling of, “We’ve gotten there, and so many people haven’t” — matters. I know Georgia politics, but have seen through reading what’s happening both throughout the world and the United States that we’re losing people because health care is out of control.

Any Republican that goes to Washington is, effectively, tainted because they have to carry the Trump mantle and follow the line and toe the line. The Republican Party is in a very precarious situation where they say, “We have to embrace our president, and he’s not a traditional conservative.” They’re in this really screwed-up position.

How do you react when you hear Handel say a vote for Ossoff is a vote for Nancy Pelosi?

Yawn. The Democrats are the minority still, by some 30 votes, and I have to say, “Okay, he’ll be there for a year and a half, and we can see if he does what he says he’s going to do.” Worst case scenario he’s a hardline super-liberal Democrat. But I think he knows he wouldn’t be reelected if he did that.