Is This What 'Make America Great Again' Means? 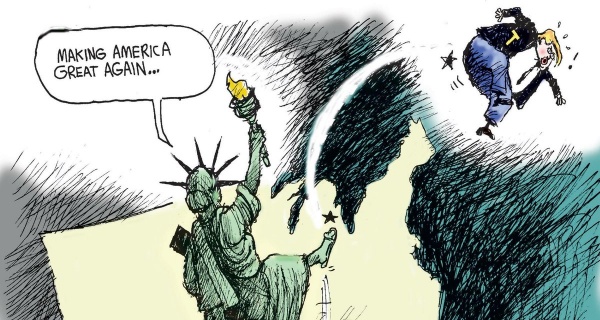 Progressive Pastor John Pavlovitz has brought us some really thoughtful and challenging blog posts since Donald Trump came on the political scene. We’ve linked to some of his best, like “It’s Time to Stop Calling Donald Trump a Christian,” his open challenge to Trump “Is this what you call winning?,” and his inspiring open letters to Hillary Clinton and Barack Obama.

Now, Pastor Pavlovitz is asking Trump’s America tongue-in-cheek if they think we’re great again yet. Trump made a lot of campaign promises and his supporters took the bait. Trump voters truly believed that America would be greater under Trump, but anyone actually paying attention knows that things are in fact worse and headed down a dark path of things that America is NOT about.

The next time you hear “Make America Great Again”, Pastor Pavlovitz has a list of questions you should ask them:

“I asked a young Syrian couple, handcuffed at the airport next to their 5-year old son. They weren’t so sure.

I asked a Standing Rock grandmother, as a stranger flushed pepper spray from her eyes. It was difficult for her to say for certain.

I asked a Transgender middle school girl who has to wait until she gets home from school to use the bathroom. She had her doubts.

I asked an exhausted single father whose 8-year old son will soon be losing his reduced price lunch. He didn’t look convinced.

I asked a Muslim family in a Detroit suburb, while they scrubbed the spray painted profanity from their front door. They were less than certain.

I asked the public high school Science teacher who has been told that she is overpaid and that the earth is not warming. She is less than enthusiastic.

I asked the wounded Veteran whose benefits aren’t likely going to be enough to sustain him as he becomes a grandfather. He was fighting to stay optimistic.

I asked the black teenager, as he watched the KKK parade past family’s Virginia row home. He had no reply.

I asked a teacher at a Jewish day school as she and her students huddled outside while waiting on the police to sweep their classroom. She was noncommittal.

I asked the gay couple, wondering if they’ll get to have the wedding their families have been dreaming of for years. They couldn’t answer.

I asked the Alabama family whose taxes and health insurance costs will climb next year, eliminating the already razor-thin breathing room they had. They didn’t think so.

I asked the Rust Belt factory worker who is now realizing that his job isn’t ever coming back and that coal isn’t either. He looked unsure.

I asked the fourth grade students in an inner city Philadelphia theatre program, whose coming semesters are in doubt. They weren’t able to answer.

I asked the undocumented woman being separated from her husband and 5 children who are all citizens. She looked skeptical.

I asked the elderly couple in a public housing neighborhood in New York City, whose ceiling is still leaking and will keep leaking. They didn’t believe so.

I asked the exhausted parents of an adult daughter with severe depression who will soon be losing the healthcare that keeps her illness at bay. They had their doubts.

I asked the victim of a campus sexual assault, who feels less able to come forward than ever. She had no answer.

Then I asked a wealthy, white, straight, Christian Republican Congressman, whose salary, family, healthcare, job security, emotional well-being, and daily life are unaffected. He’s sure it is.

All we need to do now, is to all become wealthy, white, straight, Christian Republican Congressmen—and we’ll be set.

Or maybe those of us who are not—need to make our voices heard.

Get on with it, America.”