Trump Is Completely Unhinged And Running Out Of Excuses 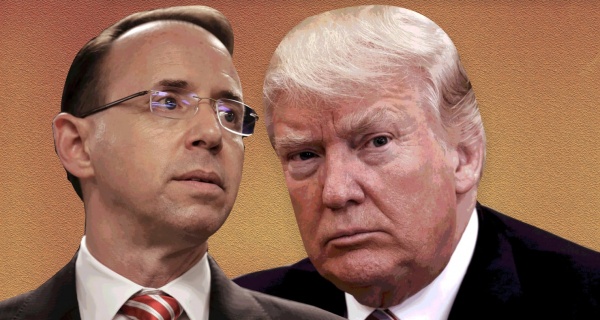 Two days ago, in celebration of his seventy-first birthday, Donald Trump received a coffee-stained birthday card from his wife, novelty oversized plane tickets to Russia from his opponents, and a news report that special prosecutor Robert Mueller is probing whether senior White House officials may have committed financial crimes. Oh, that and Trump is now personally under investigation for obstruction of justice. Law enforcement types are just terrible at picking out birthday presents.

Trump, as is his Pavlovian wont, immediately lashed out incoherently on Twitter, asserting that the inquiries into his alleged misconduct amount to a "witch hunt" conducted by "very bad and conflicted people." His problem, though, is that as president, he doesn't have the authority to fire a special prosecutor—that task instead falls to the man who tapped Mueller, Deputy Attorney General Rod Rosenstein, who became the FBI's point person on the investigation after Rosenstein's superior, Attorney General Jeff Sessions, recused himself because he couldn't stop remembering clandestine meetings with high-level Russian officials that he had mysteriously failed to disclose.

Perhaps sensing that the President's ire would soon be directed squarely at him, Rosenstein pushed back at the Post's reporting, releasing a bizarre statement. It basically amounts to a hostage video in written format.

Department of Justice sources quickly denied that the White House had ordered Rosenstein to do this, but they declined to say so on the record, which means that the same law enforcement organization that gravely cautioned the American public not to believe anonymous statements attributed to unnamed government officials is now clarifying its position using anonymous statements attributed to unnamed government officials and holy hell my head hurts.

Rosenstein's efforts to appease his boss' looming wrath, though, were apparently insufficient, because bright and early on Friday morning, this happened:

First of all, electing to begin a statement with "I am under investigation" after you've spent weeks telling anyone who would listen that you're not under investigation is an incredible self-own. But Trump's shift from vaguely criticizing the special prosecutor to explicitly throwing his own deputy attorney general under the bus is even more baffling. Before Trump axed FBI director James Comey, he specifically asked Rosenstein to write a memo justifying the move. And although he later casually revealed that he intended to terminate Comey anyway, the memo's existence at least functioned as a semi-plausible explanation for the firing other than "He was investigating Russia and I didn't like that and I wanted him to stop and he wouldn't."

Now, Trump has decided to abandon that rationale altogether and to see if blaming Rosenstein somehow makes all this unpleasantness go away. Rosenstein, in turn, has started making noise about his own potential obligation to recuse himself. No matter what Trump does, Rosenstein may very well end up being a witness in Mueller's probe, since be played a pivotal role in the firing that at the center of Mueller's inquiry. Conveniently, though, recusal would also mean that if Trump orders Mueller's ouster, it wouldn't be Rosenstein up late at night deciding whether to roll over and save his job, or refuse on principle and lose it.

As the investigations into his conduct widen in scope and seemingly close in on all sides, Donald Trump's panicked, shoot-from-the-hip responses are exposing him as a paranoid loner who is running dangerously low on friends he can trust, enemies he can demonize, and expendable associates he can stab in the back to buy himself another temporary reprieve. There is no chessboard, no master plan, no carefully-curated strategy unfolding before our eyes at which we'll one day look back and marvel at its genius. Donald Trump is a wounded animal backed into a corner, lashing out blindly and impotently at everything that moves. He is a President of the United States under investigation for obstruction of justice who wants the special prosecutor fired, and who has run out of patience with the man who possesses the authority to do so. I feel like I've seen this scenario before, and I don't feel like it ended particularly well.